THE RECESSION HAS LOWERED HOUSING PRICES!
GET IN ON IT. You CAN GET A REAL DEAL --
Your DREAM COTTAGE 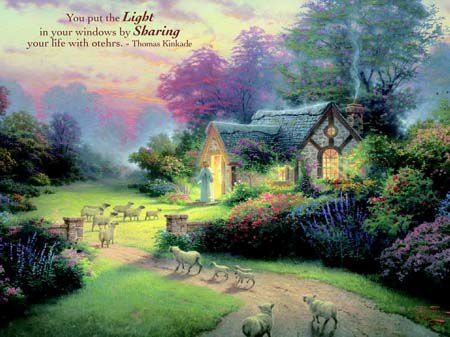 For Aaron Carter, a musician who was struggling to fit a drum
set, a piano and three guitars into his 600-square-foot apartment
in Phoenix, the math on owning a home finally began to work in
his favor.

Rent for the apartment he shared with his wife: $615. Mortgage
payment for a home with twice the space: $760. And the interest
on a mortgage is tax-deductible. So they jumped at the chance to
buy some elbow room.

"We figured that everything together, getting more space, getting
out of the apartment life and also just the prices right now, it
just was the perfect time for us as a couple" to buy, said
Carter, 20.

For Americans debating whether to buy or rent their homes, the
scales are tipping toward ownership. Because of the slide in home
prices, low interest rates and tax incentives, renters are
realizing they could handle a mortgage for a just little more
money.

An Associated Press analysis of 45 metro areas finds the gap
between the monthly mortgage payment on a median-priced home and
the median rent has shrunk from $777 a month to just $221 in the
past three years.

It could mean a quicker end to the housing-market doldrums, as
renters buy up unsold homes languishing on the market.

In some metro areas, including Cleveland, Atlanta, Indianapolis
and St. Louis, the gap was less than $100 a month. And home
prices are expected to fall faster than rents this year, which
means the gap should get even smaller.

In once-inflated markets like Phoenix, Las Vegas and inland
swaths of California and Florida, where prices have tumbled more
than 40 percent, sales are rising because first-time homebuyers
are snapping up bargain-priced homes.

Cheap foreclosures in some of those markets are now drawing
multiple bids. As supply and demand even out, home prices will
eventually begin to rise. But for now buyers are having little
trouble finding bargains.

Jere Ross, an Air Force vehicle operator, and his wife recently
bought a four-bedroom, 1½-bath house in Zephyrhills, Fla., a
Tampa suburb, for $86,500 rather than jump into another yearlong
apartment lease.

Ross, 23, used a Veterans Administration loan, which doesn't
require a down payment, and got a 30-year mortgage at a fixed
rate of 5.5 percent. His monthly payment comes to $700 a month,
including property taxes and insurance -- $110 less than he paid
to rent an apartment nearly half the size.

"It just came to a point where we were just throwing our money
away on rent," Ross said. "When it came to find out that we could
own this house for, less than what we're paying in rent, it was a
'no duh!' kind of moment."

The study, conducted for the AP by Marcus & Millichap Real Estate
Investment Services, used prices for the first three months of
this year.

It calculated mortgage payments by assuming a 10 percent down
payment, a 30-year fixed loan at 5.15 percent, and taxes and
insurance that added up to 1.5 percent of the purchase price. It
assumed borrowers used private mortgage insurance.

While the analysis found the gap between what it costs to own and
rent is shrinking, it's still too wide for millions who live
paycheck to paycheck.

Renters with jobs in the education, retail and transportation
industries don't earn enough to rent the average two-bedroom
apartment in many of these major cities, let alone buy, according
to a recent study of 200 metro areas by the Center for Housing
Policy.

Renters who want to become homeowners also face the obstacles of
scraping together a down payment and qualifying for the loan. And
renters with a record of paying bills late will have a hard time
getting a low interest rate.

"There's still those buyers that are having trouble getting
financed," says Brad Snyder, an agent with ZipRealty in Las
Vegas. "A lot of them are still just looking for that easy way
in, and it's just not there."

Homeowners also have to shoulder many costs renters don't face
association fees, insurance, some utilities. And there are
still cities, among them San Francisco and Los Angeles, where
it's usually still more affordable to rent  even though home
prices have fallen more than 30 percent.

Mike Sigal, a longtime renter in San Francisco, has looked at
buying a home for the past couple of years. But buying one
comparable to the two-bedroom, two-bath apartment he has now
would cost more than $600,000, meaning the mortgage would far
exceed his $1,800 rent.

"The math doesn't come out," said Sigal, 42, who runs an
information services company. "I've got extreme value for my
rent."

Nevertheless, homes in some parts of country are more affordable
than they've been in decades. Even Dean Baker, an economist who
sounded early warnings about the housing bubble and sold his own
condo in 2004, has come around.

Baker, co-director of the Center for Economic and Policy Research
in Washington, bought a five-bedroom house last month for
$650,000, which he figures is about 20 percent below what it
would have gone for at the peak of the market.

"We feel we got a pretty good deal," Baker said.

By buying, he accepted the risk that he might lose money if home
values keep dropping. "We'll probably end up more or less even,"
he said. "Depending how much further down they go."

NOTE: Since summer 09, values have dropped a little but they still
got a deal. And prices are still low, now.

Our POSTER is ANITA SANDS HERNANDEZ, Los Angeles Writer, Mother of 4, and career Astrologer to Yogi Bhajan for 35 years. Catch up with her websites TRUTHS GOV WILL HIDE & NEVER TELL YOU, also The  FUTURE, WHAT'S COMIN' AT YA! FRUGAL LIFE STYLE TIPS,  HOW TO SURVIVE the COMING GREAT DEPRESSION, and Secrets of Nature, HOLISTIC, AFFORDABLE HEALING. Also ARTISANRY FOR EXPORT, EARN EUROS....* Anita is at astrology@earthlink.net ). Get a 35$ natal horoscope "my money/future life" reading now + copy horoscope as a Gif file graphic! No smarter, more accurate career reading out there!

<==== BACK TO THE WALL STREET MELTDOWN WEBSITE,  SURVIVAL TIPS

<==== BACK TO THE SHOW BUSINESS ARCHIVE for writers, producers directors and video documentarians