HYPER TEXT MARK UP LANGUAGE or HTML
We know it, we use it we LOVE it
but do we know its HISTORY ?? 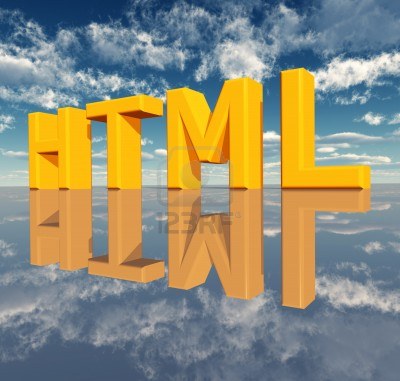 And on the 8th day God said, 'let there be HTML' And he saw
that it was good. And THAT is REALLY when God rested!

HTML —which is short for HyperText Markup Language— is the official language of the World Wide Web and was first conceived in 1990. (WIKI HTM PAGE IS HERE ) HTML is a product of SGML (Standard Generalized Markup Language) which is a complex, technical specification describing markup languages, especially those used in electronic document exchange, document management, and document publishing.

HTML was originally created to allow those who were not specialized in SGML to publish and exchange scientific and other technical documents. HTML especially facilitated this exchange by incorporating the ability to link documents electronically using hyperlinks. Thus the name HyperText Markup Language. If you intend to WRITE for the INTERNET, scan this once, know it, then forget it as today HTML is all automatic.

Back in the WHEN,  it was realized by those outside of the discipline of scientific documentation that HTML was relatively easy to learn, the coding, the 'programming' was self contained and lent itself to a number of other applications. With the evolution of the World Wide Web, HTML began to proliferate and quickly spilled over into the mainstream. And again, it became AUTOMATIC. You didn't need to understand it to do it!

Soon, companies began creating browsers —the software required to view an HTML document, i.e., a web page— and as they gained popularity it gave rise to competition and other web browsers. It may surprise some that back in late 1995, Netscape —which now plays a distant second to the King Kong of browsers, Internet Explorer— was the dominant browser on the market. In fact, Netscape was the first browser to support Javascript, animated gifs and HTML frames.

Thus began the so-called 'browser wars' and, along with seeing who could implement more 'bells and whistles' than the other guy, browser makers also began inventing proprietary HTML elements that only worked with their browsers. Some examples of these are the <marquee>...</marquee> tags (scrolling text) which originally only worked with Internet Explorer and the <blink>...</blink> tags (blinking text) which still only works with Gecko-based browsers such as Mozilla or Netscape. So what they're saying is, as more browsers came along, some of the HIGH FALOOTING HTMLS began to leave coding trails.

A side effect of all this competition was that HTML became fragmented and web authors soon found that their web pages looked fine in one browser but not in another. Hence it became increasingly difficult and time consuming to create a web page that would display uniformly across a number of different browsers. (This phenomenon remains to some extent to this very day.) But... happily, NOT IF YOU USE some old, and very basic HTM. (I use NETSCAPE BROWSER which has an HTM COMPOSER IN IT invented in 1995. )

I used NETSCAPE BROWSER until the Dell was 20 yrs old, -- in dog years that's 200 yrs...THEN MICROSOFT BIGGER BIT SOFTWARE impaired it. XP was the last OS I could use it on.  I had to suddenly use a windows 8 new computer, don't think it can even USE a DOS- based Netscape browser. I was freaked until a Pal told me SEAMONKEY was closest to NETSCAPE COMPOSER. Free download made that sweet and  voila! Yeah it's pretty much an exact replica --- only two divergencies. To handle them, two tips:

SAVING ONLINE FILES: Using Sea Monkey's browser,  find your ONLINE file. Wanna save it to cache? FIRST Hit CONTROL U to save it as htm (instantly you see the coding, this is a spectacular feature.) Then hit CONTROL S to save it, directing it to C: or D: drive where your TREE of directories has titles for every subject you write about. I USE A FILE MANAGER named ZTREE, download it online, beats Gates' FILE EXPLORER. With it, I create trees, c:\astrology c:\activism c:\babies

SO OK, Now, find the FILE you just wrote in SEAMONKEY on your TREE, pick that file --rewriting it or whatever, only you make sure you're DOING IT in SEAMONKEY'S 'COMPOSER area.' To find that, hit the MENU bar AT TOP saying "WINDOW" Pick COMPOSER or your images fly sideways in a dozen pieces like a Malaysian plane hitting the water reverting to that old MICROSOFT WORD habit of saving a dozen graphic files separately!

Another warning; SEAMONKEY DEFAULT-titles everything with the HTML extension not HTM unless you hand write in HTM and press ENTER. Meaning it can give you a second VERSION of your file and which is which? Enter the wrong one, lose your writing! So this has to become SECOND NATURE. HAND WRITE IN THE EXTENSION PROPERLY, and CHECK! PHONE ME UP let me lead you thru it. (818) 774-1939

By now, Internet Explorer (IE) had eclipsed Netscape Navigator as the browser to use while surfing the net due to its superior capabilities but also largely due to the fact that the IE came bundled with the Windows operating system. Essentially when people bought computers using the Windows OS, it had the 'internet installed on it'. This tended to suit people just fine since the typical newcomer to computers was someone who was tentatively striking forth to take on this intimidating new-fangled technology that was crammed to the rafters with indecipherable acronyms, software help files that made no sense and buggy programs. Hence, the more 'instant' solutions this new technology offered, the better it was.

As the World Wide Web approached adulthood hosting a wide variety of would-be and professional web page authors, it became increasingly apparent that cyberspace was filling up with a lot of badly written HTML.

This was due to some laziness and inexperience but was also the product of another instant solution involving web authoring tools, most particularly WYSIWYG editors, which tended to produce bloated and messy source code. As the browser wars continued —although by now it was pretty much of a massacre— the lead browser had developed capabilities akin to a junkyard dog which could gobble up any half-baked web page that it came across. This was all very fine and well but the resources (program source code, RAM on the user's computer, etc etcetera) required to run a browser that can consume just about anything was exhorbitant compared to what could be. And as the market dictated the shape of things to come, future browsers were bound follow the lead dog thus encouraging more junk code to fill up the web.

To remedy this situation, the W3C came up with a more regimental form of HTML with the intention to create a rigid standard to which web authors were encouraged to conform. This was supporting an effort to eventually 'clean up' or streamline the World Wide Web and ultimately replace presentational elements such as font with another documentational structure known as Cascading Style Sheets (CSS). In theory, once this transformation occurred, the web would place less demand on the next generation of web browsers and most specifically it would accomodate the low processing power of new portable devices such as PDAs. Hence the birth of the next generation of HTML called XHTML, the ' X ' representing that this version of HTML was based on XML (eXtensible Markup Language) instead of SGML.

Our POSTER is ANITA SANDS HERNANDEZ, Los Angeles Writer, Researcher, Mother of 4 and career Astrologer. Catch up with her LIFE AND WEALTH 101 websites starting with GUERILLA CAPITALISM , THE POORHOUSE GOURMET,  TRUTHS GOV WILL HIDE & NEVER TELL YOU, also The  FUTURE, WHAT'S COMIN' AT YA! FRUGAL LIFE STYLE TIPS,  HOW TO SURVIVE the COMING GREAT DEPRESSION, and Secrets of Nature, HOLISTIC, AFFORDABLE HEALING. Also ARTISANRY FOR EXPORT, EARN EUROS....* Anita is at astrology@earthlink.net ). Get a FREE natal horoscope "my money/future life" reading now + copy horoscope as a Gif file graphic! No smarter, more accurate career reading out there! PS. Anita sez, 'TAKE ALL OF THE 7,000  THE SAVVY LIFE 101 ARTICLES YOU WANT, POST THEM! Get a website for 5$ a month and post articles that YOU LIKE, TOO! Be someone who forwards the action, the evolution. IT IS getting better you know and by getting WORSE FIRST, it gets better!

<=== BACK TO ENRON PLANET, the DOOMSDAY SCENARIO is HOW ONE CEO KILLS AMERICA! IMAGINE 1,000 !

<====HOW TO TINKER WITH OTHER PEOPLE's BRAINS for $. NEW AGE MIND CLEARING TECH