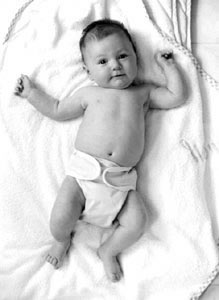 I raised four children USING HOLISTIC ALTERNATIVE RULES so that We would never need a doctor or dentist. Today, they all shop at Whole Foods and run their own cottage industries just like their Ma. They're all approaching FIFTY and never have gone to a doctor.  I was not trained by the American pediatric Community. Haven't a clue what they tell you to do. I raised my babies in the hills of Mexico far from the city, near green trees, rivers thick with watercress, small flocks of organic goats and cows. No pediatricians there! I found my information by reading holistic books or following my holistic instincts. In Japan, I would be a RONIN ---a samurai without a master. I don't hang in the usual "mommy community" didn't then and don't now,  though no longer mothering much, I don't know of any alternative health baby sites.

My contributions are not original, all ALTERNATIVE sites mention these habits I just collected them at my website, (articles on feeding, healing the baby holistically, creating a spiritual SUPER child with crib or kitchen techniques and all were prompted by being a mother in a foreign community that attracted gurus from whole world. SAN MIGUEL DE ALLENDE, state of Guanajuato in MEXICO.

For instance, the use of whole grain gruels came from a European healthfood guru I met having lunch at some macrobiotic family 's home in San Miguel which is a GREAT TOWN. An international set rents there, amusing themselves with two full time art schools, INSTITUTO ALLENDE, and the Bellas Artes. Fab place to live cheap and study. I adored it. Spent 5 yrs there. My daughter Paloma, at age 30, went there to meet her dad for lst time and flipped out at how unique it is, having an enormous American, French, Swiss & German population living in an 18th century Postcard Town.

So this European guru guy told me how to make holistic macrobiotic baby gruel. Take a cup organic, whole brown rice. Toast lightly in heavy skillet over med. flame until golden toasty, starting to pop. Then cool slightly, put in mill or blender, and blend into flour or powder. Put in jar, keep in fridge full time. That's your grain mix powder. The base of all gruel.. To make gruel. Boil very pure water in pan cleaned of all detergent residues, rinsed carefully and toweled dry with a towel that has no detergent in it. When water is simmering, add a few tbsps of the powder, a pinch of sea salt or real healthfood store full-mineral sea salt, stirring with stainless steel implement occasionally so it doesn't bunch up. When it thickens into a thin pudding like texture, it is finished. May take 3 - 5 minutes.

He said that I should take my raw goat milk or cow milk, which I got delivered daily from an Indian  cow and goatkeeper, in huge rum bottles, corked, raw and still at the goat's body temperature, brought across the mountains every morning. Mix milk half and half with gruel, add 1/2 tsp of sweetner to the mix, feed thru bottle. Or feed it from a bowl, again with a small amt (1/2 tsp, ) of sweetener stirred into it.  Rice bran syrup is optimum. Honey is too germ laden and dangerous for small children. You never feed honey to a baby under one yr of age as it's not clean enuf. I used rice bran syrup, avail at healthfoodstore at border. Every six months I brought car out for re-tagging and loaded up. I kept that bottle of rice bran in fridge too. Sweeten gruel minimally. Stir in the sweetener. This is a starch food and that's why we don't put milk on it, but full cream in slight amts. You can occasionally, add a little full cream, on top, as you do on cereal. Gruel should be given in a cereal meal, when you do not give protein. STARCHES are dissolved and digested by the saliva.

Now, true this guru said mix it half with the milk, liquifying it, give thru bottle to infants. So OK. I did that too. To a newborn infant, bottle's easiest. When baby's ready for fingerfood, I like EZEKIEL 4:19 bible bread, 'thou shalt take the grains of the field, soak them in a cauldron then make the bread out of it' said the bible. Well, people actually do that now, I mean bakers do all that. It's not  FLOUR, it's soaked grains and very very good for us. Amazingly leaves no acid in your teeth after you chew it, which flour DOES. No matter that it's whole grain flour! The acid had been rinsed away by this soaking process. My major supermarket food chains in LA both carry this at $2.39 a loaf. Healthfood stores, (which LA has in abundance) also have many FLOUR-FREE, pure soaked all night grain bible bread loaves home-made or baked by them or by bakers. I keep the wrapped loaf in freezer full time. In summer check loaf for any sign of mold and return to maker if you find any, even a little bit. Get a new loaf.

I very litely toast a piece, (so he can still salivate it into mush quickly) put tiniest amt. of butter or nut butter on it, (fat inhibits digestion of starches) and I let baby duke it out with this piece of toast. QUARTER it so he doesn't have to FIGHT the crust to get to the center. Allow her/him to masticate, salivate each bite. Show him the chewing thing. The natural finger foods for a baby are gonna have to be slightly soft. NOT CARROT OR CELERY! Not at the outset. Later yes, for sure. Start with avocado, papaya. Slice as finger food. No skin on either of course! As papayas are imported from third world countries I'd wash the fruit,then cut into it and/or peel section from bottom end of fruit, rinse again in fresh, clean water. Serve baby the ripest end which is bottom of fruit, not neck. Save necks for adults.  Mangoes work for infants. But wash skin, then get it off. In that order. Then rinse the flesh again. Cuz  mexican microbe is similar to an atom bomb. All these are high vit C/A foods --very good for baby.

Next, accustom the type to the Avocado which is a steak in a tree. Give in a protein meal. Meaning no starches or sugars in same meal. Proteins are eaten wi. greens if you want to combine correctly. Corn tortilla, NON GMO is so close to a protein it is accepted by digestion as one.

Avocados should never be RIPE RIPE. If you bite in and love the flavor, it's ripe enuf. Must be buttery firm without being mushy or fermenting. Mushy avos, throw 'em away or return them to store. It should just dent to the finger tip, in the store, then use right away Or buy firm, keep until they dent like a firm peach. A soft avocado cannot even be given to a dog! Harmful especially to animals. If I use part of the avo, I lemon juice baste the cut, leave it  OUT, I don't fridge it --- I try to get back to it same day or in that nite's salad.

Giving these natural foods, and not only natural, but the most POWERFUL vitamin super foods that exist, to an infant, is a VERY GOOD IDEA. WHOLE GRAIN BROWN RICE, AVOCADOS, Tree ripened orange colored fruit. Washed THEN peeled mangoes. In Mexico you assume the skin has microbes and wash before cutting. Same for citrus and papayas.

ABOUT NURSING: The mother will have tons of milk if she pursues a peasant diet, high in OATS, oat gruels, beans. This fact was noticed even two centuries ago:   "How it is that poor men's wives, who have no cold fowl and port wine on which to be coshered up, nurse their children without difficulty,  whereas the wives of rich men, who eat and drink everything that is good, cannot do so, we will for the present leave to the doctors and mothers to settle between them."   Anthony Trollope; Barchester Towers; 1857.

TODDLERS- When baby is older, try sliced fresh organic strawberries. (Pesticides on non-organic are pretty high.) When baby is older, try washed, sliced red cherries. But do not mix MILK in a meal with cherries or any fruit. Learn to food combine correctly which actually means NEVER COMBINE!. Cherries and all fruits are eaten alone. An hour later, you can give a different type of food. After a protein meal, give no fruits. The exception might be raw pineapple which aids in digestion of protein. Stay away from tinned pineapple as the amt of heavy metal leeched into that fruit DITTO TOMATO/ CHILIS ...will poison your stomach, stop digestion for a few months! A great website with a sample diet and LIFESTYLE for mothers/babies is what a human should wisely eat. PERFECT FOODS.

Our POSTER is ANITA SANDS HERNANDEZ, Los Angeles Writer, mother of 4 and career Astrologer. Catch up with her websites  TRUTHS GOV WILL HIDE & NEVER TELL YOU, also The  FUTURE, WHAT'S COMIN' AT YA! FRUGAL LIFE STYLE TIPS,  HOW TO SURVIVE the COMING GREAT DEPRESSION, and Secrets of Nature, HOLISTIC, AFFORDABLE HEALING. Also ARTISANRY FOR EXPORT, EARN EUROS.  Anita is at astrology@earthlink.net ). Get a 35$ natal horoscope "my money/future life" reading now + copy horoscope as a Gif file graphic! No smarter, more accurate career reading out there!

<====START YOUR OWN CHARITY, CHANGE THE WORLD WHILE YOU EARN VERY WELL

<=== BACK TO THE FRUGAL INDEX PAGE, CHEAP-FREAKS OF THE WORLD UNITE!

<=== BACK TO SITE ALLOWING YOU TO REPUBLISH ALL FREE, EARN AD REVENUE, 7,000 FILES WE CALL BLOGSTUFFERS