THE PARASITE INSIDE AMERICA IS  not the MEXICANS, it's US! THEY WERE THE ORIGINAL DWELLERS HERE. THEY were the HOST WHO WAS INVADED AND VANQUISHED. We are the parasitic life form! 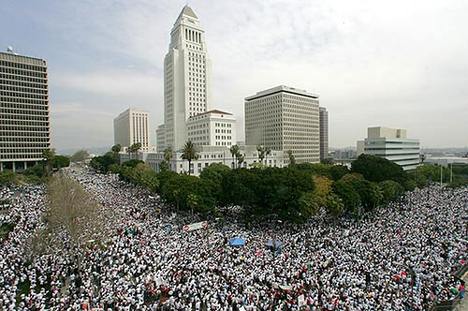 Picture to the right is the GRAND MARCHA in LOS ANGELES a few years back. Did you think it was only about immigration law? NAHHH. It is an interdimensional karmic battle of RIG-VEDIC BHAGVAD GITA proportions! That's the one where KRISHNA teaches ARJUNA not to worry which side you are on, but to fight for what you believe is MORAL RIGHT, and to fight elegantly. Without cruelty. To fight kindly. To realize that GOD AND TIME will show you BY BATTLE who is right and to be OPEN to the whispering of  your own, moral compass while you fight. That you're not to worry, pick one team and fight with valor. Take risks of death, but never forsake truth and always listen to KRISHNA and don't hurt someone who MAY BE telling the truth a tad better than you, and who is every bit as noble as you are. Krishna tells Arjuna that this war is just a big waking up process and that waking is more important than the warring. That this 'war' was destined since the dawn of history. Two families --the Montagues and the Capulets of some ancient day --are going to go at it. Doesn't matter which side you're on, just how well you evolve thru the ardors of battle..

http://www.mexica-movement.org/granmarcha.htm FOR A GROUP OF PHOTOS THAT WILL TAKE YOUR BREATH AWAY. READ what each PICKET CARD sez, then come back here and read this below.

(AP) LOS ANGELES The marching orders were clear: Carry American flags and pack the kids, pick up your trash and wear white for peace and for effect.

Many of the 500,000 people who crammed downtown Los Angeles on Saturday to protest legislation that would make criminals out of illegal immigrants learned where, when and even how to demonstrate from the Spanish-language media. According to reports, one single DJ at an FM station started it all.

For English-speaking America, the mass protests in Los Angeles and other U.S. cities over the past few days have been surprising for their size and seeming spontaneity.

But they were organized, promoted or publicized for weeks by Spanish-language radio hosts DJ's and TV anchors as a demonstration of Hispanic pride and power.

In Milwaukee, where at least 10,000 people rallied last week, one radio station manager called some employers to ask that they not fire protesters for skipping work. In Chicago, a demonstration that drew 100,000 people received coverage on local television more than a week in advance.

"This was a much bigger story for the Latino media," said Felix Gutierrez, a professor at the University of Southern California's Annenberg School for Communication. "If the mainstream media had been paying better attention, there would not have been the surprise about the turnout."

Adrian Velasco first learned of House legislation to overhaul
immigration policy on Los Angeles' Que Buena 105.5 FM. Over two weeks,
the 30-year-old illegal immigrant soaked up details about the planned
march against the bill from Hispanic TV and radio. On Saturday, he and
three friends headed downtown.

"They told all the Hispanic people to go and support these things,"
Velasco said. "They explained a lot. They said, 'Here's what we're going
to do."'

One of those doing the most talking was El Piolin, a syndicated morning
show radio host who is broadcast in 20 cities.

El Piolin, whose real name is Eduardo Sotelo and whose nickname means
"Tweety Bird," persuaded colleagues from 11 Spanish-language radio
stations in Los Angeles to talk up the rally on air.

He said that he devised the idea of telling protesters to wear white and
carry flags to symbolize their peaceful intent and love of the United
States. He also urged parents to bring their children to minimize
chances of violence and reminded everyone to bring plenty of water and
trash bags.

"I was talking about how we need to be united to demonstrate that we're
not bad guys and we're not criminals," said Sotelo, 35, who crossed into
the United States as a teenager and became legal in 1996.

In Milwaukee, the Spanish-language station WDDW 104.7 made a point of
publicizing the House legislation and the protest against it on its
morning and drive-time shows two weeks ahead of time.

Operations manager Armando Ulloa said his goal was at least 10,000
people -- and police estimated that was what the rally attracted. After
the march, Ulloa said, he called some employers and asked them to be
lenient on protesters who missed their shifts.

"The Spanish media said, 'Do it in a proper way. Do it in a way where's
there's pride behind it when you're done,"' Ortiz said.

Telemundo Chicago, a Spanish-language TV station, began its coverage
blitz 1 1/2 weeks before a recent rally, though there was no urging that
viewers attend, said news director Esteban Creste.

"We just told them what was going on," Creste said. "While we were not
trying to mobilize people, it might have prompted people to decide to go
there."

The protests continued Tuesday in at least four states, with thousands
of students leaving school again in California, Arizona, Texas and
Nevada.

In Los Angeles, the numbers were far smaller than the tens of thousands
who marched Monday. Authorities thwarted efforts to block freeway
traffic, rounding up some youngsters and issuing truancy citations.

In Phoenix, students marched to the state Capitol for the second day in a row.
In Las Vegas, they rallied near the Strip after being directed away from casinos.

And in Dallas, students crowded in front of City Hall, waving Mexican and
Salvadoran flags and shouting "We can do it" in Spanish.

WHEN I SAW the photos and the full extent of the AZTLAN MOVEMENT, I realized what DJ's could do. ONE DJ PIOLIN started this half million man march. And got other DJ's to join him. NOWHERE ELSE is there an activist better suited to mobilize a target audience, (In this case, Latinos) than the DJ.

And LATINOS had the right to be angry about how they are treated in America. How they must hide or be caught, have children caught. We WHITES were the invaders who killed the RESIDENT HOST THE AMERICAN INDIAN.  We invaded their land. Gave them small-pox infected blankets. Bullet shot them into extinction and submission. We occupied. We colonized. And we gave the INDIANS long marches when we moved the INDIANS out of east side of USA, on  death walks, doing so between 1836 and 1848 to empty FLORIDA to TENNESSEE, on top and below, Nevada, New Mexico, Texas, California. So Andy Jackson joins Stalin and Hitler in the best history books. TRY TO FORGET that WE ARE THE SUCCESSFUL PARASITE. Time to stop REPEATING THE ERROR. Let the Latinos who do not have criminal arrests or history do jobs which we don't want to do.  Let them drive cars until they get their green cards. LET THEM CLIMB THE LADDER of WEALTH. Might inspire some lazy pot smoking teenager you have hanging around the house. ANY JOB THESE DAYS IS A GOOD JOB.

Our POSTER is ANITA SANDS HERNANDEZ, Los Angeles Writer, dissident activist, mother of 4 and career Astrologer. Catch up with her websites TRUTHS GOV WILL HIDE & NEVER TELL YOU, also The  FUTURE, WHAT'S COMIN' AT YA! FRUGAL LIFE STYLE TIPS,  HOW TO SURVIVE the COMING GREAT DEPRESSION, and Secrets of Nature, HOLISTIC, AFFORDABLE HEALING. Also ARTISANRY FOR EXPORT, EARN EUROS.. Anita is at astrology@earthlink.net ). Get a 35$ natal horoscope "my money/future life" reading now + copy horoscope as a Gif file graphic! No smarter, more accurate career reading out there! PS. Anita sez, 'get a website for 5$ a month (FREE INSTRUCTIONS HERE) or free BLOG and post articles that YOU LIKE, TOO! Be someone who forwards the action, the evolution. THE CRIMINAL NWO is being backed off  slowly and it IS getting better you know. Thanks to teacher activists who sleuth the truth on DEEP STATE.

<=== INVESTIGATE DOING DRIP IRRIGATE- LINES in DROUGHT STATES as YOUR ENTREPRENEURIAL BIZ.
MAKE HUGE $, TAKES 1 HR TO LEARN. at HOME DEPOT.  A TEEN CAN DO it out of an old VW BUS.

<==== BACK TO THE BREAK INTO SHOW BUSINESS ARCHIVE for writers, producers, video documentarians

<=== MEET ANITA --Mother of FOUR WHO WRITES ALL THESE ARTICLES

<=== BACK TO HOW NOT TO GET SNOOKERED, A WEBSITE

<====== BACK TO CONSPIRACY THEORIES I HAVE KNOWN

<====== BACK TO HOW TO MERCHANDISE OURSELVES ONLINE

ALL OF THESE and 6,000 MORE ARE COMMON CAUSE, REPUBLISH AS YOU WILL, EDIT, TAKE MY NAME OFF THEM, REWRITE, take credit, WHATEVER. GET A 4$ WEBSITE and AD REVENUES POUR IN.