HOW TO PICK A WIFE 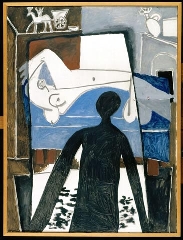 A Great Guru THE MASTER JULES -- once told me what a man really needs. He said 'perpetual harmony of mind.' I said to him,"hey, we're in Southern California. Here, most of us have it." He replied "NO WAY. We are all reactive all the time & it must stop. Let everyone around you DO OR SAY whatever they want, without arguing. No reacting. Forgive and love them AS THEY ARE. The only person to change is ourselves, mutating our DESIRES into total acceptance of what is.

He said that the path to get OUT of our usual "I WANT" habit was to begin doing a minute of yoga every morning and every night. Just one minute. That minute of nothingness, bliss, acceptance imposed on the restless mind will eventually train you to accept an impulse other than your own crazy ideas.

Your own impulse is to steer the Titanic into the iceberg. To allow the supreme hand to take the wheel of your life will create your steering thru dark waters, not smacking into trouble and being luckier in love and business, more accepting of people AS THEY ARE hence more 'up' in mood and happier in your friendships.

He also said: 'the secret of happiness is to only choose what will give you peace of mind. Stay away from things that show signs of banishing peace of mind. To have the will power to stay away from unhealthy relationships is a great thing. Remember YOU ARE (in a sense,) a GOD. Act, do as God would do at every moment. BE GENEROUS, FORGIVING, ungrasping. SAY WHAT YOU MEAN, MEAN WHAT YOU SAY'. Let your eyes be your guide. Tell the truth about them to  yourself. Tell the truth about them TO THEM! To be happy with people/family sweethearts, whatever, clients, boss be TOTALLY forgiving. EVERY INSTANT, stay in the heart. When an AFFRONT comes, a tactless word, forgive it instantly. When they betray you and your ego is hurt, outraged, in horror --say 'whatever.'

THAT is spiritual practice and we must practice every minute. Read books from metaphysical book stores about the path that describe it. If you can practice what you read, you will know how to be more joyful, understanding of peoples' whim's and capriciousness, or what you might interpret as their affronting or betraying you.

The guru said that when we feel people are 'affronting us, that it is' our own ego' reacting like a spoiled child. He says that the ego has but one job. It is trying to KILL us. I don't think he meant the body, though that too. He meant the SOUL LIFE. He said you are responsible for your own safety. 'Don't choose people that are a hassle. Say you're working with a boss who you know is a S.O.B… well, that's not a good example because you HAVE to work for the guy ---that's your boss.

Now, here is one that pertains to YOU: Let's say before getting involved romantically, a good idea for HARMONY OF MIND is to PRE-TEST the girl. Don’t let her slip a hook in your mouth until you find out if she has loyalty, a desire not to hurt feelings ---if she is tactful, if she is pure, if she respects you. If not, break it off. Don't continue to see her. Don't allow yourself to get attached to people who don't give us PEACE and harmony. Now, say you find yourself in the position of having to wean yourself off of a harmful lady. In your REBIRTH period, only date new lady friends at lunch. Not only does the friendship ripen in a wholesome way, (because women SHINE in the daytime, when they're unafraid while they are paranoid at night, afraid you're trying to leap on their bones cuz you bought them a burger!). Daytime dates assure a happy, bright and slow, even start to the thing. Successful marriages occur when the man is inspired to be chivalrous, cherishes the 'girl,' considers her HIS BABY GIRL. She brings out the best in him. Then, that girl has to look to you for wisdom. You protect and give advice. You are the OAK tree, she is the flower.

To see if she has this respect, TAKE YOUR TIME! at least 3 or 4 LUNCH dates BEFORE a dinner date give one time to examine her with a clear head. You want to see if she has the ability to REALLY connect with the great and manly protector you really are. A lot of women just listen to a man talk about himself, then the girl says 'oooh how smart you are' and the guy gets this ego glow and nobody's ever really THERE for the other person. It's all a shallow game. There's a stupid tendency in 90'S singles to forgive the other person shallowness, DISTANCE or insanity if someone's CUTE enough. MEN lose BIGTIME when they settle for this. Sometimes they lose YEARS and a ton of $$. QUIT picking women who are self-involved, uninterested in the man's INNER PERSON, not certain of HIS UNIQUENESS, and who are still searching for MR. TRULY UNIQUE. Quit bonding with chicks who need distance, for THEN, all we attract is TAKERS who would make lousy MOTHERS for the children we will ONE DAY HAVE! ON the other hand, if you're been deeply scarred in some relationship, and believe you see another taker in some new love, maybe the spot is on your eye. A playful woman has the right to ask for gifts. Tolerate acquisitiveness in a woman. Nature designed it into her so her KIDS would have stuff. This weans out the guys who are NOT generous, who'd make bad fathers. STUPID women don't ask. SMART women do. STUPID women GIVE to men. Smart women see that a man has capitalist moxie. And test it. What you shouldn't forgive in a girl is REAL GREED, shallow, uncaring, untending, ungiving. To me a girl who makes NO LUNCH BOX for her man whenhe goes off to work is worse than an 80$ dress charge. AVOID WOMEN who don't make food and think this is CUTE because you'll 'tie in with' a woman who would make a terrible mother to your KIDS. Your kids will eat at the automat. Humans need 3 nutritious meals a day to be brainy and escape disease. DO NOT PICK an IDIOT, a lazy cow; don't DO THIS TO YOUR CHILDREN even if they aren't born yet. Especially if they're not.

Even if you don't want kids, don't set yourself up for getting abandoned by frivolous, lazy, UNCARING females. That kind will always take the kids, too and bring them to some stepfather who'll abuse them. The Bhagvad Gita said 'the woman who takes another man to be father to your children is your child's worst enemy.' I say, if you picked that woman, YOU ARE. Pray to GOD for this addictiveness to cute, ambitious, seductive, manipulative, lazy, untalented and basically masculine women to leave you as if it were an addiction to HEROIN.

DO NOT FORGIVE WOMEN who show no 'kitchen-concern', no dietary neatness, or who DO show irritation on any subject. Be ready to cut the ties the second you see a hag in the making. Avoid anything that shows promise of taking away your peace of mind later. A woman who's distant, does not listen to your ideas and value them and won't feed or clean, or serve you hoping to make you happy. She does NOT CARE.  I guarantee you, WORSE traits hide underneath this uncaring behavior. 85% of humanity is without HOPE of evolving. LA's biggest best yoga teacher Shaman said that. Not me.

ANOTHER CLUE. When she's at parties, she's staring at other men. This woman is planning on SEEING other people and lying about it. SHe doesn't COMMIT. Other things dumb men tolerate: a woman who nags and makes you defensive and irritated. That is neurotic and it comes from 'letting weeds grow, not handling things. It will make an unhappy marriage.

Avoid the woman who doesn't let the man LEAD with his plans, ideas --- a woman who doesn't show faith and support her man or at least discuss his ideas at length and LISTEN carefully before she DECIDES on things.

If a woman doesn't show interest in your ideas, dreams, career, PAST, etc, lose her. But our ego lies to us, and our 'id' (Freud termed it) i.e., our sexual /romantic nature --is damned if it's going to lose this thing which on some levels is so SPIFFY and which occasionally makes us feel good. So selfishly, we overlook and we forgive. We fool ourselves. Sometimes we even NAIL a woman who doesn't really love us, who is just using us for temporary fun or worst of all, to give her a house and kids, while she pursues her career, then later get alimony. PICK BETTER than that.

To PICK BETTER GALS, go to Centers of Political DO-gooders. The sweetest women are active in community work. They go to library, book stores, in particular USED book stores as what kind of nutty woman pays 30$ for a book? SPENDTHRIFTS!

Drop the losers fast. Best book that I ever found on letting go was "How to Break your addiction to a Person" by Howard Halpern. I hear GETTING THE LOVE YOU NEED by Hendricks or Hendrix is amazing but they'res not about love addiction. Your librarian can find you these titles, order them from main library, plus other books on self-esteem, love, relationships. For moonlighting in a second career, Start an L.A. (loveaholics anonymous) group in your area by getting a local psychologist to talk for free (she gets no bread from the gate, she gets thousands from the clients it attracts.) Charge 5$ to 10$ a head depending on the economy.  to a group you organize with flyers, and you get the money. You can make 500$ a nite. Back to relationships. If you want to work on a problematic relationship, phone her up on the astral plane and talk it over. Do some yoga. Long, slow breathing with painful stretches. Then, when your body and brain are fully oxygenated and the third eye is open, ENVISUALIZE yourself dressed beautifully as she comes into the room. Ask 'the daydream woman' a simple question. HEAR her answer. If this soul radio is real, she'll answer the TRUTH as you're talking to her unconscious. You can find out things you really need to hear. And if you need to break it off, there's only one way. No human can break these chains. You have to pray regularly to GOD to break it, for the miracle that HE removes those chains from you. That's the only way it will go. And you will be amazed at the miracle when it suddenly passes like a fever and you're well again.

VISIT THE “MEN ONLY” PAGE, HOW TO GET THE GIRL THAT YOU WANT

WHAT TO DO TO FIND A GREAT WOMAN?

If you're a non-giving guy, then what?

How to pick a good wife. FOOL PROOF METHOD! (YOU ARE HERE NOW )

HOW a man can have absolutely any woman he wants.

HOW TO GET THE PRETTIEST GIRL AT ANY BAR, PARTY OR DANCE!

BEVERLY HILLS MATCHMAKER TELLS MEN HOW TO GET IT TOGETHER