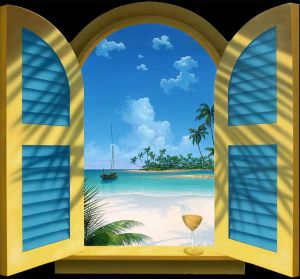 Wine 80c. a bottle, servant 4$ a day, Rent 300$ a
month, Web access so you can invite the relatives over.
Blood Pressure back to normal. PRICELESS

For any prospective world travelers or persons who are considering living overseas for a while, the simple fear of the unknown can often be a huge deterrent. It is my hope that after reading this article those fears might be eradicated, as I take you through a quick tour of what to expect in third world overseas living. To quell any doubts you might be having as to the validity of this tour, I should state that I S, Carrikm kived my entire life overseas, living in Saudi Arabia, Myanmar, Chile and Zimbabwe, thus covering all the third world continents.( Poster's NOTE: this was before the crime and terrorism, gang.)

Different languages or not being able to speak any foreign languages is pry the biggest fear and consideration of anyone hoping to live overseas. Luckily for us Americans, since the British once ruled over most of the world, many if not most of the countries you might live in, will probably speak English and in most other countries, at least the younger generations will speak English. However, in most of South America and Upper Africa, the main languages are Spanish and French respectively. If you don’t want to learn a new language to get around, avoid those areas.

For the most part, even in a country that doesn’t speak English, a few simple expressions and lots of hand gestures can get you through daily life quite easily. Some good snippets to learn are “how much does this cost", “please" and “thank you", “where are the bathrooms", etc. Your life style will influence the expressions you’ll need to learn.

In many countries, especially those of third world nations, water is meant to be bathed in and cooked with, but never to be drunk. Certainly, locals will often consume their local water but it is highly advised that you either boil all of your water before consuming it or simply buy large bottled water jugs instead. I found that local water could be used for rinsing out my mouth after brushing my teeth, but that if I ever drank a glass of water I usually ended up in the bathroom a few hours later. One loophole to get around becoming accustomed to the local water flora and fauna is to drink the local beers. Good news huh? Since local beers are brewed with local waters and then distilled, the harmful critters in the water are killed and so you can slowly build tolerance to them.

Similarly with food, it’s not advised to immediately delve into the local flavors unless you posses a strong stomach and even stronger bowels. Start with dishes that resemble those you might be used to: cooked chicken and beef, pasta etc. As with the water gradually build a tolerance to the foods before they become a larger part of your diet. If however, local foods aren’t your cup of tea, it is quite easy to maintain an American diet by simply buying local ingredients and cooking Americana. I know that growing up my diet was quite similar to many American foods, with the addition of a few more ‘international’ dishes.

Housing is perhaps the best part of living overseas. Since real-estate is so cheap in third world countries, you’ll probably be shocked to find out that you can quite easily rent extremely large properties for pennies. On top of that, most houses tend to be equipped with pools, hard wood floors, numerous full bathrooms (most of my houses I stayed in had one bathroom per room) and high vaulted ceilings. If nothing else, the accommodations of overseas living are worth the trip.

For any woman reading this, you’ll be happy to know that overseas shopping is probably the best in the world. Prices are cheap and you’ll be able to buy gifts, housing décor and trinkets a plenty without spending much money at all (Google his article ‘How to Haggle in Third World Countries’ for more information).

Similarly, once you’re established in a country, traveling around tends to be cheap. The biggest factor in ‘in country’ traveling is that as a resident of the country you tend to be privy to enormous savings. While tourists might pay upwards of $300 a night at some hotels, your local status can and often times will reduce the price to a quarter if not less. (I don't know about that! Hotels tourists go to STAY 300$ a night. But hotels that LOCALS use are 30$ a night. They have fans in the ceilings, lizards too, but they're OK!)

Perhaps my fondest memories of my time overseas were those memories that included the local personalities of a country. In every country I lived in, the local people were hospitable, kind and truly welcoming. Above all the other amenities overseas living has to offer the people of the country you’ll live in will be the greatest part. Make the effort to incorporate yourself into their culture and you’ll enjoy your experience ten fold.

POSTER, ANITA adds: DRUG CZARS, TERORISTS,  CRIMINALS, Murders, kidnappings are a reality in Mexico and Colombia. 46,000 murders in Mexico alone. My gal friend there knows two people who got permanently disappeared. Neither knew the other. In their 20's.  One came out of university library at sunset. The other was driving home to Mexico City. Car was found, not the dog. Which means one can't just tell you don't be conspicuous and live too high on the hog. Neither of those two did, however.

<==BACK TO THE FUTURE INDEX