IS HE FOR REAL? or a LYING SEDUCER?
Is he KIND HEARTED, or a CRUEL, SOCIOPATH USER?

Having had astrology clients bankrupted by bad boyfriends, having watched them lose everything valuable they owned from an angry, discarded fiance breaking into their storage unit and stealing all her belongings, or stealing her life savings, or boinking her best friend --- men who seemed so terrific, I recommend testing your new sweeties better. There is an interesting way to TEST the authenticity, intelligence and SOUL POWER of the sweetheart you just met.


1.) Analyze his voice. The voice will tell you his truth and authenticity levels. You have to TUNE the ear slightly to concentrate through this new orifice, which hitherto perhaps you took for granted. HEARING is much keener than eyesight. Men didn't choose their faces, but they CHOSE their voices. If you listen with the third ear, you can tell what his choices were. I had a boyfriend who loved films, wrote them. He had invented a sultry Bogart as sinuous as a snake. If snakes had voices, that would have been HIS. I got ripped off for thirty years of my youth.

That's how,  today, re-rolling a mental recording of his voice, I realized that some men have learned to get gals hot with a low, intentional, powerful way of speaking. A seductive voice. They are wowing ladies by putting a husky, low, sultry, insinuating energy in their SOUND. Others have voices as direct as Boy Scouts. They are straight as arrows, often candid.

Listen well, and you will find that even when you're not with him, you can still summon up the nuances of his voice and re-roll the sound and get 'stuff' off it. Come up with a take. A vision into the guy.

Be sure you re-play his opening lines to you. One of the most predatory men I've heard of approached a beauty in a health food store telling her that he'd like to make her his, that he was a multi-millionaire and he'd give her his entire fortune and take care of her for life. She wasted a half year on this hustler. She had to spend so much time at his mountain cabin serving his pleasure needs that she lost her entire yoga clientele and a ton of money.

Next, to have something to compare him with, you need a control group. Shut your eyes when you listen to male celebs talking live on talk shows, on TV. Not acting but just answering questions and talking about their lives. Start to listen for the differences, for the CHARACTER that hangs out of the voice box. Distinguish between a man who's a sultry intentional, deliberate, thought-out bastard and who's the real deal. Authentic. Shoot from the hip. Real. How about men who are hiding, prevaricating, avoiding.

2.) FIND OUT what really lurks in his head -- what your sweetie's BELIEFS are. These will tell you WHO IS IN THERE! Test him on some important issues. One day out of nowhere, in a relaxed moment, tell him that you were reading this article on the internet, and guess what. The OIL EMPIRE of the USA  is a tightly welded group of CEO's who share the helm of multiple corporations, billionaires who easily buy and control politicians. Together, they run Washington, TEXAS, SHELL, GULF, EXXON, MOBIL and used the BUSH family to spearhead their oil wars. 25,000 GI's were wounded 5,000 dead  The daily drone missions still take out 30 to 40 people at a time though today just today it was 200 in one 24 hour period. Now, what does HE think about this?

Half the men will say we gotta get back at them for 3000 dead in WTC 911. The other half will say that the l00 thousand we murdered in Afghanistan and Iraq are enough payback. Way way enough.  Which of those two types would be more fun to be married to?

To really continue this experiment, you're going to have to read up on all the important POLARIZED, either-or issues of our day. On each dinner date, talk to your sweetheart about ONE ISSUE. STUDY at the CONVERSATION 101  WEBSITE. Pretend to not know the answers...and that you're seeking the FINAL view from him. Edification from HIM. If he says 'kill the Syrians, Kill Assad' he's a right winger.

An article about spotting a liar, on CNN said: "The most common vocal deception clues are pauses and speech errors," he says. "These occur either because the liar may not have worked out his or her lie ahead of time, or because even if they did expect to lie, they did not anticipate your particular question." Ekman offers a few more tips for sharpening your B.S. detector: 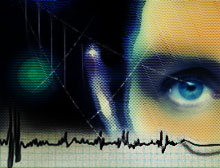 Be wary of making important deals with people until you've come to know them. Watch the person in a variety of situations to ascertain his or her normal speech patterns, gestures and facial expressions. Then see if those patterns change under questioning.

Avoid entering into agreements over the phone. Studies show people are most likely to lie via telephone. (This can help you bust a liar. He tells you one thing on phone, make him go over it again in person.)

2. Establish rapport: Get them relaxed and comfortable. Subtly mimic their posture and movements; speak in their style. This will relax them and wear down their guard.

3. Ask for minute details: Liars hate to give detail and often are evasive. Though con artists normally rehearse their lies and may look completely at ease answering your questions; ask for a lot of specifics. It will be difficult for them to remember what they told you, and they'll eventually trip themselves up. You may want to interrupt them with an unrelated question while they're in the midst of their story, then bring them back to their explanation and see how well it hangs together.

4. Watch for "false" facial expressions: According to Ekman, even the most practiced liars are unable to produce the minute movements in the upper part of the face that naturally come when certain emotions are felt. For example, if someone truly feels fear or sadness their forehead will crease. And when people are genuinely happy, their eye muscles will be involved in their smile. Ekman also says a sign that someone is feigning an emotion is that the facial expressions or onset or offset of the emotion is too abrupt.

5. Give them an out: Finally, make it easy for them to tell you the truth. Never show surprise or a negative reaction. LATER when it's a different STORY coming out of his mouth he may think you either didn't hear him correctly when he told you that stuff after the TEQUILA or didn't understand what he said. Always leave a way out so they can recant their words and tell you the truth later. It's not necessary to BUST him on LIES it is necessary TO REMEMBER THAT THERE WERE LIES and HE WILL LIE AGAIN.

Rehearse these tiips; You will find out if your darling is on automatic pilot, mindless as a kitten or hard hearted like a rottweiler. Whatever it is, you wanna know NOW who you're dating! Cuz he could be the father of your children one day! And if you're headed toward bringing a soulless liar to a child, you have to have the willpower to stop yourself. There are other articles here about getting off a guy you're ON.    Go thru the entire LUCK IN LOVE SEMINAR for those.

Our POSTER is ANITA SANDS HERNANDEZ, Los Angeles Writer, Researcher, mother of 4 and career Astrologer. Catch up with her websites  TRUTHS GOV WILL HIDE & NEVER TELL YOU, also The  FUTURE, WHAT'S COMIN' AT YA! FRUGAL LIFE STYLE TIPS,  HOW TO SURVIVE the COMING GREAT DEPRESSION, and Secrets of Nature, HOLISTIC, AFFORDABLE HEALING. Also ARTISANRY FOR EXPORT, EARN EUROS...Anita is at astrology@earthlink.net ). Get a 35$ natal horoscope "my money/future life" reading now + copy horoscope as a Gif file graphic! No smarter, more accurate career reading out there!

<====HOW TO DO A HANDMADE WEBSITE AND MAKE MONEY FROM AD REVENUE.  USE these ARTICLES
REPUBLISH THEM FOREVER ---TOTALLY FREE.


<=== FOR GIRLS ONLY, HOW TO MARRY A BILLIONAIRE & SAVE THE WORLD WITH HIS MONEY


<===BACK TO THE CONVERSATION 101 TUTORIAL, SO YOU SHOW UP AS BRIGHT at HOLIDAY PARTIES

<===BACK TO THE GENTLEMAN FARMER'S GARDEN INDEX

<=== BACK TO THE ACTIVISM IS A DELIGHT PAGE

<=== BACK TO JERRY'S REFRIGERATOR & the Tin Hat Collection of CONSPIRACY THEORIES!

<=== BACK TO THE GLOBAL ELITE AND THE DAMAGE THEY DO

<===BACK TO THE HISTORY OF EMPIRES AND EMPERORS

<===BACK TO THE "GET TO KNOW YOUR  LOCAL OLIGARCH " WEBSITE

<=== BACK TO THE HEROES OF ACTIVISM WEBPAGE

<== BACK TO THE CREATE A CHARITY & SALARY YOURSELF WEBPAGE

<==BACK TO THE HOLISTIC ARCHIVE, 100 WAYS TO REJUVENATE, PREVENT DISEASE

<==To Transform yourself and your consciousness to GODDESS ON EARTH, go the MASTER JULES website.