HOW TO MARRY THE RICHEST MAN IN THE WORLD. 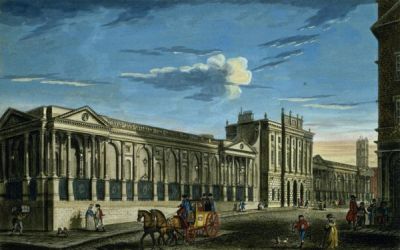 I'm stuck late at the office, dear. Take the Lear
to Paris, our room at the Ritz. I'll be there by morning.

There is a way that a stunning beauty with charisma to spare, an urge to save the world, can absolutely marry the biggest billionaire on the planet. Simple. Just five steps and you will be standing in front of the BANK OF ENGLAND up there on THREADNEEDLE street,  A huge diamond on your finger, a Lear jet waiting to take you to the Third World so you and your sweet charity can use a teeny bit of your mate's $ to create an internat'l artisanry bazaar & save it.

#1: GET A DEGREE in FINANCE & ECONOMICS. Minor in PROGRESSIVE MICROLENDING to third world villagers, start up entrepreneurs. Understand the workings of  CHARITIES

#2 GO TO ONE OF THE 481 BANKS THAT HEADQUARTER IN LONDON and SEEK A JOB. It doesn't matter if you get the job, you meet more people going on job interviews than actually TAKING a job. Don't worry about working papers, the BOSS who wants to hire you does that.  TALK TO the Bank President ABOUT HOW MICROLENDING has saved parts of the third world. Tell him of MOHAMMAD YUNU$, the SAINT who created the  'POOR PEOPLE's BANK"  & won the NOBEL PRIZE. Ask him why BIG BANKERS don't create their own "YUNUS corner" in its many offices and offer micro loans? Small entrepreneur$ often have graet start up ideas, plenty of audacity and high hopes which can generally create a business employing a few families!  Betcha if you take this idea to all 481 bankers on the job interview and volunteer to faciliate franchises for them, in every city of the world, they'd look at you with respect!

#4 MARRY that BILLIONAIRE Go on your honeymoon to poorest countries, India, Africa.

#5. Set up MICROLENDING centers at extant banks in every city across the world  for ENTREPRENEUR START-UPS. Sit back and watch the entrepreneurs multiply the money.

Start now, see if this is the world for you. Read up on LONDON BANKING. Be  up on the latest gossip, like LEHMANS COLLAPSED, one of the BIG FIVE BANKS in LONDON! IT COLLAPSES? Fergawdsake! How did that happen. You google it until you understand and can talk intelligently about bank collapse. Now, when in LONDON, Go see the empty LEHMAN's bldg at CANARY WHARF. 30 floors of glass and offices, a Lease 'til 2033, now dead in the water. And I'd worry. It's insured by AIG! Here's your first bank gossip, memorize it! Then sign up at college for ECONOMICS and FINANCE. This week!

"Canary Wharf has been on a roller-coaster ride since construction of its
towers began in 1988. Now it appears to be in for another bump.

The bankruptcy of Lehman Brothers is threatening more trouble for the
financial district, which is already jittery as banks cut back on
expansion plans amid the year-old credit crunch. The 30-floor glass
tower that Lehman rents in Canary Wharf could be on the market soon,
putting more downward pressure on rents that have already softened
substantially over the past year.

Adding to the concern: If Lehman defaults on the rent on its lease,
which runs through 2033, landlord Canary Wharf Group is protected by an
insurance policy with AIG Financial Products, a division of American
International Group Inc., the US insurance titan facing a cash shortage
and rattling markets globally. Under the contract, AIG would step in and
pay the rent for "up to four years from default," said Canary Wharf
Group's majority shareholder, Songbird Estates, in a statement Tuesday.
That's another layer of worry given AIG's precarious position.

If Lehman vacates the building, it would be the second large empty tower
in Canary Wharf. A 12-story, partly completed building designed to house
Bear Stearns is currently hanging in limbo after that bank was bailed
out and acquired earlier this year. Construction is due to finish next
year.

"Even if Lehman survives it won't occupy nearly as much space as it did
previously," says James Roberts, head of central London research for
Knight Frank, a property consultancy. "And there is the whole
psychological effect of a tower -- looking at it and knowing it's empty."

Canary Wharf today is home to some of the biggest banks in London. But
it has had a history of booms and busts. Built on former docks a few
miles southeast of central London, Canary Wharf gets its name because
many of the imports arriving at the docks were from the Canary Islands.
The complex of gleaming skyscrapers was conceived in the 1980s and
originally developed by Olympia & York, the developer that built the
World Financial Centre complex in New York City.

Across London, the banking crisis comes at a particularly bad time for
the commercial real-estate industry. Cranes dot the skyline as the city
undergoes a building boom, adding office space to the market just as
banks are retrenching.

Office rental prices on Canary Wharf peaked at £50, or about $90, a
square foot in the third quarter of 2007, Roberts said. By the second
quarter of this year, they had dropped about 10% to £45 a square foot.

Perhaps most exposed to the district's troubles is Canary Wharf Group,
which, in addition to owning the Lehman tower, owns more than half of
the 14 million square feet of office space in Canary Wharf. Songbird
Estates, a publicly traded company based in London that owns 60% of
Canary Wharf Group, said in a statement Tuesday that the board of Canary
Wharf Group expects to start talking soon with the administrator of
Lehman's insolvency proceedings in the UK, PricewaterhouseCoopers. A
PricewaterhouseCoopers spokeswoman declined to comment on the tower.

Lehman, which moved into the tower in 2001 because it wanted more space
to grow, rents about one million square feet, Songbird said. Lehman
occupies 875,000 square feet of the space; the rest is sublet to other
tenants.

Monday, after being told that Lehman had filed for bankruptcy, Lehman
employees streamed out of the London tower into nearby pubs. They stayed
until well into the evening, drinking pints of beer and trading nervous
chatter about their futures.

With credit-rating firms recently lowering AIG's rating, the insurer
needs to "post collateral or have the AIG commitment guaranteed by an
entity with specified credit ratings," Songbird said, adding that it has
access to a £300m line of credit that it can use to pay bondholders if
all else fails.

This week's tumultuous banking news could also mean tougher times ahead
for London's other main business district, known as the City. Merrill
Lynch rents 550,000 square feet on King Edward Street in the City, but
after Bank of America's offer to buy Merrill Lynch this week, the future
of that lease is unclear, analysts say. Officials at Merrill Lynch and
Bank of America declined to comment.

~^~^~^~^ LONDON IS UPTIGHT, CUSTOMS at airport is a BITCH, GOING IN. I KNOW people who after a conversation with the customs guy were sent right back to where they came from, on the same airplane!  If you're lucky enough to get in at the airport, be polite, pure, not too chatty, just answer questions with a relaxed smile in as few words as possible. And keep an attitude of gratitude for MEETING this nice customs person.

CONSIDER WORKING IN THE BANKING INDUSTRY THERE!


WORKING PAPERS in the U.K. for AMERICANS? GOOGLE LATEST LAWS ON THIS.

It doesn't matter if you get a job. Simply looking, you'll meet people,
ten times the amt you'd know if you HAD a job. A HUNDRED TIMES.
The employer will get your papers for you.

Now, start right away, Student loan, masters in Finance, Economics, Minor in Charitable foundations. Remember, this won't work unless you're drop dead gorgeous. GET "MERCHANT BANKERS" by Joseph Wechsberg, a buck at ABE BOOKS. COM and all titles on Warburgs, Rothschilds, Lehmans, Just put those names into the TITLE AREA. Bone up on HOW TO FIND BOOKS AT ABES. Used books a buck each sometimes LESS.

<==== BACK TO THE SHOW BUSINESS  ARCHIVE for writers, directors, producers and documentary makers

LOVE, PARTIES, HAPPY HOBNOBBING and FRIENDS to you, PARTY PEOPLE! Take me to the HOW TO MARRY A BILLIONAIRE WEBSITE so I can save the world with HIS MONEY.