HOW LOW HAS CALIFORNIA FALLEN?

Fish one little coke can out of a trash dumpster, to redeem it, a unit drives up, brakes hard, two cops leap out, pistols pointed; "it's a BUST!" RECYCLING is illegal! Did you know that? Eat a bunch of wilted raw carrots out of a dumpster, behind a health food store. Off to jail! Do not pass go. It's ILLEGAL! Junked wilted carrots! What is a child running away from the familial roof to do? Wait at the Big Mac stand until someone throws white bread crusts in the trash, gobble that just because it's legal? I raised my kids to eat carrots. No flour was allowed. In any form, not even pasta.

I have on my desk a little Cracker Jack prize Sega gismo that you turn on and a man walks down a narrow bridge. Suddenly, sections of the bridge give way. The trick is to know when to make him leap so this precarious traveler lands on something still standing. Very hard to do. The thing is an inch big piece of junk and it can outplay ME! Well, that's the system we have. Worthless junk that has become an emotional hazard, dangerous to our kids and it outplays us!

Now I'll be candid. Craziness runs in my family. My great grand aunt pawned the family silver for a box of Budapest chocolate. And homelessness runs in my family lately. My sister's kid started it off, got tired of his single mother's non-stop nagging for chores being done. Take to the streets, in contrast, he got sweet silence sleeping in the alleys of Santa Monica. That's a good thing. Dumb is the kid that doesn't recognize nagging bad, silence sweet. But what he got instead were strings of cops pulling up, pistols drawn and repeated busts.

Cousin Winnie (Win-Stone as I call him) would tell the Judge 'yes he'd taken the carrots from the trash, yes he'd do the time for crime and he'd go to jail for a week', recognizing that recycling other people's Coke cans was heinous for the homeless. Winnie would trudge back into court a week later, get his manacles removed and get out on time served or sometimes judges got irritated, he'd have to sign up for Community service.

My lovely Nephew, who can give a massage that startles, juice ten vegies into elixir, make flutes out of dry sticks, polish rocks he finds on desert or beach into smooth gems, THAT Cousin Winnie found that community service turned out to be days of waking at dawn, paying more for a bus ride than he ever spent on eating in a week, going to some church and stuffing envelopes for eight hours, with no alleys nearby for lunch. White man's way torture. Give Tonto jail.

A nation built on Protestant Work Ethic with no side path for slaggards is not my kind of nation. What ever happened to the Huck Finns who whittled, chewed meadowstraw, slingshot crows, took chunks out of cooling pies on window ledges and only occasionally pretended to work but always in a triumph of grinning, winking one-up-man-ship? That was a noble American spirit and tradition, once, wasn't it? It was valued, by the right people. No better man than Mark Twain ever walked God's earth. Well lemme tell you, whittling is gone with the horse and buggy.

As a bewildered mother, watching the best boy whittlers float away in the current, it's becoming real easy to believe those Internet Conspiracy Theorists who tell us we're being digested by the machine we live in, that StepFather Bank has conspired to make 80 hr, two-job work weeks the norm for Dad and Mom and the teens too --to suck the life out of us, drain the brain of juice that might froth into spit, revolution or reform.

We're all hardwired into the Monolith. We churn dollars so this Retrovirus StepFather Bank can cannibalize its own cogs. Somewhere in the belly of the machine, we run in circles like panting hamsters so at the end of a chute, a guy in a Limo can pull up to the Ritz, wolf ten desserts with his latest mistress, steal the value out of the corporation and give a Corporate Ball with togas and roses for cronies who eat crab, caviar, filet mignon, chocolate souflee and wash it down with Rothschild red.

Not only our blood and sweat goes into that machine, to make the wine flow red but our children do too. ANY kid who tries to escape and eat out of garbage pails, as an act of civil disobedience, or recycle trash, or eat it, will pay with the nomenclature of felon, jailbird, record, package, criminal, dunce.

My own child now wanders, without car, without plastic, without roof, fleeing the State of California. He mistook a few girlish, third world smiles for something personal, fell in love with a Baja California girl, walked back to Baja, got turned down but kept walking. Now he languishes in a Federal Prison called OJOS NEGROS. Well named. That's what got him down there in the first place. Her black eyes.

My son, like Jesus, wandered the desert on foot, friendless, homeless and food and drinkless for 40 days --- 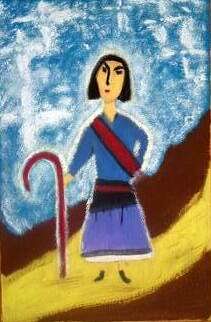 under a fiercely baking September -- then, October sun. Dizzied, undernourished, he committed the mistake --the unpardonable atrocity of falling asleep in a boat at Ensenada harbor. The tide rose and fell, he dozed on. He woke to find a dozen federales with guns pointed at him. They smiled gummy silver smiles, they had a gringo! But chinga su madre! No wallet, no I.D. No PLASTIC!

Cops in Baja like their helpless Gringo prisoners to have plastic. When they got the beautiful Dawn Wilson, she had a few credit cards It took the POLICE a week to reduce them to rubble, four thousand bucks later they couldn't let her go free to complain so she was in their prison for 17  months, serving a 5 year term for a bottle of pills bought legally at a pharmacy. No longer any websites that I could find to read more about her. But Dawn is  free Found this last  trace of her online: "She was arrested by Mexican police walking back to her boat with medication her husband needed. She was taken to jail for not having the correct paperwork. It turned into a shakedown after Mexican police ran up her credit cards. Dawn is certainly no drug addict, she's your wife, sister, or daughter, and she spent 17 months in a Mexican prison but she is free." From Sailboat Owners website.

My baby son had no pills, no plastic on him. So they accused him of boat theft and moved on to exploiting his mother demanding 2,000$ in  cash. The American Consulate girls got it cut down to four hundred U.S. dollars, come down, pay up they give me back the kid.

I drove 100 miles down to Tijuana, met the Consul, we drove another l00 miles to the Ensenada prison, I had a lovely tearful reunion with my son. The cops felt me up and nabbed the blouse full of granola bars. I thought I'd feed him but instead, Luis gave me his bowl of pork broth and his tortilla. I ate it. I hope they gave him a second serving. That night, the Mex cops drove him to a house where they had other prisoners about to cross. Then next morn, he was taken in cuffs to the border, put into American cops' hands. They brought him to L.A to stand trial for walking away from a halfway house.. Today, a decade later, 2015, he is still in an American jail, of sorts, PATTON MENTAL HOSPITAL. A carrot cooler, fully medicated.

So if this happens to you, I recommend writing the American Consuls who protect American citizens in trouble down there and they do a fine job --they're diplomats. But the American justice system? Can it ever stop digesting its own?