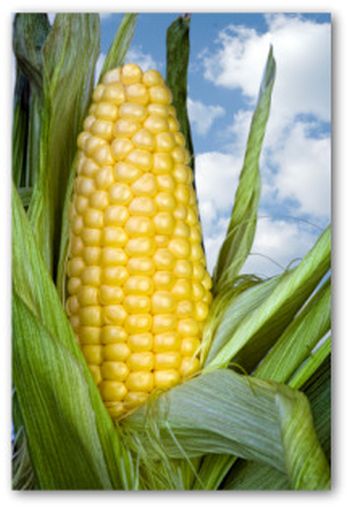 WHEN TOMATOES START TO BLOOM, IT'S CORN TIME IN THE NORTHERN HEMISPHERE!!!

WHEN the only corn in a chain supermarket is white, grow your own. Compost a huge plot and WAIT FOR THE HEAT of LATE SPRING TO PLANT YOUR CORN. Stagger the plantings--One row a week 2nd a week later. Do that for ten weeks. CORN IS GOOD for you! Not that GMO sugary white ear the supers sell, YUK! Get some heritage seed! HIGHLY COLORED FIELD CORN is a quasi protein. Doesn't have all the amino acids but eaten with greens and pulse/ bean/lentils, you vegetarians may approach a complete amino especially if you use field corn, which is what animals eat. I know you won't, you're going to run out and buy that BURPEE white sugar-stick stuff that's probably genetically mutated. (sigh.) But try to find old fashioned yellow. To inspire you, Hit the VILLAGE FARMER's  stand that comes up on the highway each June and give a summer party with 50 ears. (RECIPES BELOW) Write it down now, "BUY SEED FOR YELLOW CORN." Maybe also grow some field corn which is intended for livestock & when it's all fat ears, pick it young, don't let field corn get old and grainy! Unless you have squirrels and pigs. Last, maybe Arrange with your local farmer to get some of his seed.

A few years back, I grew blue field corn which an ABE books vendor sent me. His antique seed originated with his family in Canada. If you want to taste HOPI Blue field corn go to HERITAGE SEEDS. For one summer I was cooking the lovely, sky blue ears and using it in the following recipes which will work with your yellow corn.

STEAMED VS. GRILLED  Steaming corn on the cob is gentle, fast and virtually foolproof. It seems pure and perfect. But grilling corn on the cob manages the seemingly impossible: it makes the corn even better. The fire imparts a smoke flavor and intensifies the corn's sweetness. But the best way to grill is a matter of debate. The only important question is whether to grill the corn in the husk or stripped bare and exposed directly to the heat. Everything else is nuance.

Some grill aficionados argue that the husk keeps the corn moist and juicy, protecting the delicate kernels from being scorched. Proponents of husk-off grilling contend that exposing the ears to live coals brings out sweetness by caramelizing the corn's natural sugars. It also opens up the corn to smoke, giving it powerful flavor.

Corn without its husk needs some form of lubrication, like a quick brush of olive oil or butter, to keep it moist. In the husk, it needs to be soaked before grilling to keep the green covering from totally going up in smoke.

When buying corn for grilling, pick out the largest, fattest ears and feel them to be sure the cob is filled out with plump kernels all the way to the pointed tip.

Corn grillers in Lynchburg, Tenn., have soaking down to a science. Regina Qualls, the Metro Moore County Volunteer Fire Department treasurer, who is an 11-year veteran of corn-roast find-raisers, described how the husk and corn is soaked in salted water for 24 hours to make the ears more tender. Ice is added to the salt water every few hours to keep it from souring.

The ears are then grilled over blazing-hot charcoal until the husks are as charred as cinders. When those are pulled off, the plump roasted kernels are exceptionally succulent, thanks to the salty water. Nitzy Rabin, the chef and owner of Chillingsworth and Greenhouse Bistro, in Brewster, on Cape Cod, takes the middle ground on the husk question. He strips off the outside layers to allow some of the smoke and grill flavor to penetrate to the kernels; the inner layers are left on to keep the kernels from burning. Before grilling, he also cuts off and discards the tassel of silk that extends from the end. The burned husk and silk can be stripped off afterward. (Wear clean garden gloves to protect your hands if the corn is hot.) Pat Garland, a food stylist and caterer in Manhattan, has a more ingenious presentation. She shucks the ears the way you'd peel a banana, by pulling back the husks from top to bottom, but leaves them attached to the base of the cob. She then ties them back with string, so that the husk forms a sort of handle that makes it easy to hold the ear as it is eaten. She brushes the corn with olive oil or butter and grills it over a hot fire until the kernels are dark golden brown. (Be sure to position the husk away from the fire.) You may even hear the kernels crackle. This method -- minus the husk, of course -- can also be used by the grill-deprived for broiling corn. If you don't want to struggle with the silk after the corn is grilled, carefully pull back the husks, leaving them attached at the base, strip out the silk, then pull the husks back over the ears. Soak the ears in cold water for an hour or so: that way, the husks will stay in place as they cook. In Oaxaca, Mexico, corn is traditionally grilled without the husk by street vendors who cook the ears until smoky and golden over charcoal-burning braziers. But in truth, it's the accompaniments that set this grilled corn apart: first a slathering of mayonnaise, then a coat of salty grated cheese, and finally, tongue-tingling blasts of chili powder and fresh lime juice. The combination sounds strange, but quickly becomes addictive.

TRINIDADIAN GRILLED CORN WITH GARLIC CILANTRO BUTTER Time: 20 minutes 1 stick salted butter, at room temperature 2 cloves garlic, minced 3 tablespoons finely chopped fresh cilantro Freshly ground black pepper 8 ears of fresh corn, husks tied back and silk removed Salt to taste. 1. Light a hot fire in the grill. Place butter in a bowl, and whisk in the garlic, cilantro and pepper. 2. Brush a little butter on corn. Position the ears on grill so the tied husks hang over the edge. Grill corn until nicely browned on all sides, 2 to 3 minutes a side, basting with garlic cilantro butter. Brush once more with butter, and season with salt and pepper before serving. Yield: 4 to 8 servings.

OAXACAN GRILLED CORN Time: 15 minutes 8 ears of fresh corn, husks tied back and silk removed 1/4 cup melted butter 1 cup mayonnaise 1 cup freshly grated queso anejo (see note), Parmesan or Romano cheese 3 tablespoons chili powder 8 lime wedges. 1. Build a hot fire in the grill. Brush each ear with melted butter. 2. Place mayonnaise, cheese, chili powder and lime wedges in separate serving bowls (the cheese should be in a wide, shallow bowl). Place on table, with a butter knife for spreading the mayonnaise. 3. Position corn on grill so the tied husks hang over the edge or are away from the hot coals. Grill until nicely browned on all sides, 2 to 3 minutes a side. Transfer corn to a platter. 4. Have each person spread mayonnaise on corn, then sprinkle it with cheese and chili powder, working over the cheese bowl. Finally, squeeze on the lime juice. Yield: 4 to 8 servings. Note: Queso anejo, similar in flavor to Parmesan, is sold in Mexican markets. You can't see the tilde. It's pronounced ANN-YEH=HO.

LYNCHBURG FIRE DEPARTMENT'S GRILLED CAYENNE CORN IN THE HUSK Time: 15 minutes, plus 24 hours for soaking 3 tablespoons salt, plus more for sprinkling 8 ears of fresh corn, husks on 1 stick melted butter, in wide shallow baking dish Black pepper Cayenne pepper, if desired. 1. Combine 2 quarts water and salt in a large pot or bucket and stir to dissolve. Place corn in water and soak for 24 hours or overnight. 2. Build a very hot fire in the grill. Grill corn until husks are charred and blackened, 5 to 8 minutes a side, turning with tongs. 3. When corn is cool enough to handle, strip off the charred husks. Roll each ear of corn in melted butter. Season with salt, pepper, and cayenne if desired. Serve at once. Yield: 4 to 8 servings.

<---- BACK TO the Poorhouse Gourmet RECIPE page

<=== BACK TO 1,001 ARTICLES TO GET YOU THRU THE RECESSION IN ABUNDANCE