Bread Pudding is thought of as an old fashioned dessert that had its humble beginnings in 13th century England. It was first known as a "poor man's pudding" as it was made from stale leftover bread that was just moistened in milk, eggs or even during hard times, water, to which a little sugar, spices and apples were added. 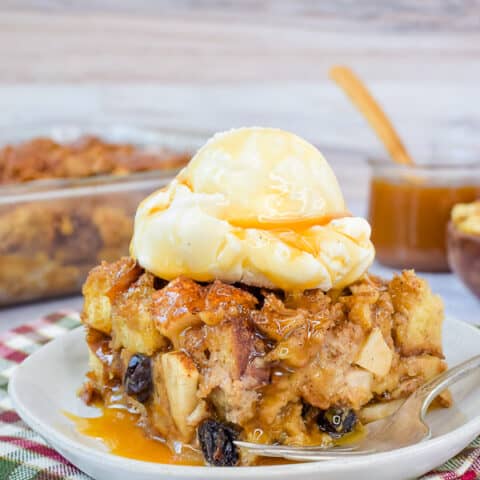 Fast forward to today and you will find that we still make our bread puddings with bread but the breads we use are often made especially for this pudding and the types are wide ranging; brioche, challah, croissant, panettone, French, Italian and sometimes even raisin bread or scones. And unlike bread puddings of the past, we now moisten the bread in a rich mixture (really a custard) of cream, eggs, sugar, butter, vanilla extract, and spices. It is no longer a poor man's pudding. It is now a rich, creamy, decadent dessert that has made its way onto the dessert menus of many fine restaurants.

To make a Bread Pudding the bread is first cut into bit sized cubes and the choice of whether to remove the bread crusts is yours. The cubes of bread are then placed in a 9 x 13 inch baking pan. Then we need to make the custard which is then poured over the bread cubes. You can add chopped nuts, pieces of chocolate, lemon or orange zest, a little alcohol, candied, dried or even fresh fruits for more flavor and texture.

The one thing to take note of, though, is that this pudding is baked in a water bath (i.e. a larger pan holding water, so that the sides don't become hard, crusty. You want the whole thing custardy.)  A water bath starts with a large shallow pan (usually a roasting pan of some sort) that is big enough to hold a smaller pan that is filled with a delicate food. It is best to place a clean dish towel on the bottom of the large roasting pan to prevent the dish from moving about during baking. Once you have placed the smaller dish inside the large roasting pan, hot water is poured into the larger pan until it reaches about halfway up the outside of the smaller dish containing the food. This is then placed in a slow oven. We do this because a water bath prevents delicate foods, like this bread pudding, from burning, drying out, or curdling (when a milk or egg mixture separates into its liquid and solid components). Just make sure to occasionally check the water level during the baking time, adding more hot water as necessary.

ONCE YOU MAKE A BREAD PUDDING you will have the riff memorized and will be able to extemporize. It's always a custard of milk/eggs, flavorings thrown over some good bread. Add ice cream or whipped cream after it comes out of the oven, and it aint so humble. It's royal, a satisfying creamy dessert. Fruit is optional. This recipe has apples and raisins and the tastiest nut out there. PECAN. If you want, sub walnuts.

Preheat oven to 350 F. Spread pecans in a shallow baking
pan and bake until golden, about 8-10 minutes, stirring
occasionally. Meanwhile, place bread cubes in a greased
3-quart or larger slow cooker. Peel, core and thinly
slice the apples. Mix lightly together the honey,
cinnamon and nutmeg, add eggs and mix well. Blend in half
and half or milk and then stir in bourbon or brandy.
Lightly mix pecans with bread and apples. Pour egg
mixture over bread. Drizzle with butter. Cover and cook
on low until apples are tender when pierced and custard
is set;  Let pudding stand, covered, for about 15 minutes.
Serve warm with ice cream, whipped cream if desired.

Our POSTER is ANITA SANDS HERNANDEZ, Los Angeles Writer, Futurist  mother of 4 and career Astrologer. Yogi Bhajan said she was the best.  Catch up with her websites  TRUTHS GOV WILL HIDE & NEVER TELL YOU, also The  FUTURE, WHAT'S COMIN' AT YA! & HOW TO SURVIVE the COMING GREAT DEPRESSION, and Secrets of Nature, HOLISTIC, AFFORDABLE HEALING. Also HOW TO LIVE on A NICKLE, The FRUGAL PAGE.* Anita is at astrology@earthlink.net ). Get a 35$ natal horoscope "my money/future life" reading now + copy horoscope as a Gif file graphic!

<=== BACK TO REAL CAUSES OF THE MELTDOWN -- a WEBPAGE with the FIX FOR CORRUPT CAPITALISM IN IT!

<==== BACK TO SUCCESSFUL CASH CROP FILE

<=== BACK TO THE QUICK, DO IT YOURSELF RECIPE COLLECTION at FOOD INDEX PAGE