More than one billion to go hungry this year! 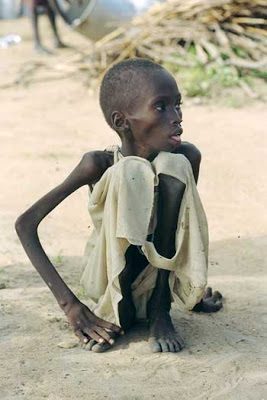 It's not about hunger. Death is any minute!

Have you ever had a rumbly belly? Uncomfortable, no? Mind goes, strength goes, Depression sets in. Cold extremities. Death is knocking at your door. One fifth of the planet has that problem every day all day. And all night. Can you imagine trying to sleep on a pile of straw with that empty belly gnawing at your inside and fleas and mosquitoes gnawing at the outside?  MILLIONS of children go through that nightly. A good part of a BILLION is what the figures tell us. All dwarfed in body and brain.

What can we do about this problem? Simple. Aspire to be very rich so you can correct it. Be a MOTIVATED, CHARISMATIC CAPITALIST and make a billion dollars.  Or, if you are very beautiful, marry a billionaire and create an import/export biz to the starving villages. Create an atelier in that village. A manager who ships folklorico items. Just this evening not minutes before reading the brief article on famine which I INCLUDE BELOW, I was talking with the girlfriend of an Ex Army Colonel, Ex NATO INTELLIGENCE, American guy but Mossad-trained master of security, veteran of two Iraq wars AND KOSOVO war too, (having a Ruski galpal got him kicked out of the army.) He went on to teach military studies at a Jesuit College. Another great romance got him fired. Now he's sad. He makes great money teaching airport security around the state but swears that he's moody and unfulfilled. Selfishness is a bitch ain't it?  THE MONEY that man could MAKE with that knowledge! I know of a SECURITY CORP that made its owner one half billion dollars last year. How could he be paralyzed by comparing his Mossad days to his forty year fat belly N.O.W? There are a few hundred deep pocket corporations in every city that require SECURITY. He can train his labor force. It's 8 hrs in L.A. to train / qualify for a gun permit. He could pull barrio homeys off the street and grind out  millions doing security. Then once he is rich as Bill Gates and wants his soul back, there are a million starving villages, a thousand starving countries where he and his team of security chums could set up an ARTISANRY EXPORTING CARTEL!

First he should do the security biz, make the billions,then do the "FOLKLORICO BAZAAR"  IDEA when he's in his late fifties. So I mentioned to the girlfriend that this known security company, X-CORP, (not the name, obviously) made one half billion dollars last year, gov and corporate contracts, sent her to a website that proved it and that is not a very old corporation either and the head guy at X CORP started with a little  karate skills, zip else. Nothing even like HER BF has! I told her to suggest this line of work to the moody boyfriend. With all the jobless bozos walking around, he'd staff up real quick. But always give l0% of profits to community, doing 'starving village exports. or doing artisan producing shops inside America, teaching inner city boys how to be ubermenchen, give COACH BAGS a run for their money. Get good HOME BOYS P.R. But with most of his time, just do security contracts. Then when he's made his first billion, he could start one such Security biz in every crime-plagued city in the world. Teach each the art of how licensing and bonding guards, bring order to the world. A Crime free Recession. For a second I thought she didn't hear me, that she was as moody as he, just wanted to get married. And I was thinking that HOLE in people's chest is pathological when suddenly she caught fire with the idea. I emailed her websites of X-CORP SECURITY to show the BF, though I'm sure that HE knows how many millions these security contracts garner. Well, let's see how this story turns out. (No answer from them. I should have sent them the POWER DIET to get the DEPRESSION OUT OF YOUR BONES.

My point is, do you think SOLUTIONS would exist if there weren't problems? Expose yourself to problems regularly. Read up on them. absorb them through your pores. See documentaries on them. It'll turn you into a millionaire or like XCORP's karate guy, a billionaire, faster than you think. So here's the article I was reading at the exact time she called. 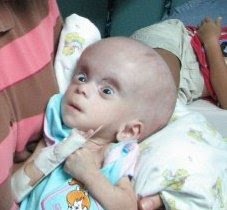 In a report delivered before the United Nations' Food Policy conference in Bangkok Thailand, Jacques Diouf, the director general of the UN's Food and Agricultural Organization (FAO) warned that more than one billion people across the world were now likely to go undernourished in 2009. That number is up from the 963 million, or roughly 1 in 7 people, projected by the FAO for 2008. Diouf pointed out that while prices for essential agricultural commodities such as rice, corn and wheat have fallen from the destructive heights they reached in 2008, they remain approximately 30 percent higher than 2005 rates. Diouf told the Financial Times in an interview last week, "The food crisis is not over."   Current prices are already placing an enormous burden on poor and working class people throughout the world. However, Diouf further warned that prices could soar once again to the highs recorded between 2007 and 2008 due to the lack of credit currently available to farmers, which has affected their production and expansion capabilities. During 2007-2008 the price of corn rose 31 percent, rice 74 percent, soybeans 87 percent and wheat 130 percent. The inability of masses of people to afford basic food necessities under these conditions led to global unrest, with food riots breaking out in no less than 30 countries.

The FAO has documented at length a number of the ongoing emergencies in food security. In the most recent update on  food emergencies from February, the FAO reports that 32 countries around the world are in a state of immediate crisis  and food insecurity, requiring external assistance. The FAO has placed particular emphasis on the Gaza Strip,  devastated by recent Israeli aggression, as well as Kenya, Somalia and Zimbabwe, where "the food security situation is  precarious following drought-reduced crops, civil disturbance and/or economic crisis."

The report notes, "More than 18 million people face serious food
insecurity due either to conflict, unrest, or adverse weather or a
combined effect" in Eastern Africa. In Kenya, the FAO reports, millions
are faced with food insecurity, and the government "has declared a state
of National Disaster and indicated that about 10 million people are
highly food insecure including 3.2 million drought-affected people."

"In Eritrea, [in Northeastern Africa]," the report states, "cereal
prices remain high affecting the food security of large sections of the
population" while across its Western border in southern Sudan, "despite
an overall improvement in the supply of cereals, inadequate transport
and marketing systems will prevent any significant movements from
surplus to deficit areas."

A report released by the International Trade Union Federation in March
titled A Recipe for Hunger: How the World is Failing on Food, attempts
to paint a broader picture of the crisis while echoing predictions made
by Diouf and the FAO: "In Africa the poorest are hit the hardest. 160
million people are trying to survive on an income of less than half a
dollar a day. Most of those households are net buyers of food, not
producers. The result is that soaring food prices hit household budgets
of the poor in the developing countries. An impact felt instantly
because an average of 50 to 70 percent of their budget is spent on food,
leaving no room for a well-balanced, highly nutritional diet."

The report goes on to say that "not since the 1970s and the
international oil crisis have food prices across the globe been this
elevated. ... The shock of high prices began already in 2006, and
agricultural commodity prices continued to rise until mid-2008.
Medium-term projections from FAO indicate that food prices in 2009 may
fall but will still remain well above their pre-2004 level in the coming
years."

Having made a number of dire predictions regarding world hunger, Diouf's
proposed solution for confronting the crisis is to appeal to the leaders
of the G20 countries for funds. "The first and foremost important
element," says Diouf, "is the need to invest in agricultural production,
and this would require $30 billion a year."

The proposed solution to the problem presented by Diouf, the FAO and
similar agencies entrusted with the monitoring of food emergencies,
doesn't approach the heart of the problem. If $30 billion per year or
more is required to save agricultural production from a state of crisis,
one must ask, under whose control and in whose interests those
investments are to be made To leave the food supplies and their
distribution to the world's population in the hands of the G20 leaders
and the ruling elites of the nation states they represent, only leads
the food crisis into continued chaos.

The already vulnerable and anarchic state of worldwide food production
was exploded by the credit crisis and the rampant speculation in food
commodities that came as credit bubbles burst, but the root cause of
widespread food insecurity is not the current crisis but the very nature
of the capitalist system itself, from which the crisis has emerged.

<=== BACK TO DO a CHARITABLE ARTISANRY IMPORT EXPORT BIZ
(salary yourself and your friends, travel the world, make millions)

Our POSTER is ANITA SANDS HERNANDEZ, Los Angeles Writer, Mother of 4 and career Astrologer. Catch up with her websites  TRUTHS GOV WILL HIDE & NEVER TELL YOU, also The  FUTURE, WHAT'S COMIN' AT YA! FRUGAL LIFE STYLE TIPS,  HOW TO SURVIVE the COMING GREAT DEPRESSION, and Secrets of Nature, HOLISTIC, AFFORDABLE HEALING. Also ARTISANRY FOR EXPORT, EARN EUROS...* Anita is at astrology@earthlink.net ). Get a 15$ natal horoscope "my money/future life" reading now + copy horoscope as a Gif file graphic! No smarter, more accurate career reading out there!

<===BACK TO THE EMPIRE INDEX PAGE

<=== BACK TO ENRON PLANET, the DOOMSDAY   SCENARIO!

<== BACK TO THE FUTURE INDEX PAGE

<== BACK TO THE WEBTECH FOR DUMMIES WEBPAGE

<=== BACK TO THE COLONIAL KITCHEN for your OFF GRID HOME

<==== BACK TO THE AMBITION TRAINING INDEX PAGE