What's Coming Out of Baby's Bottle?

A new Japanese study now suggests that the plastic tableware
and containers from which we often serve foods may contribute
carcinogenic adulterants of their own -- hormone-mimicking building blocks
of a plastic.

Roughly 95 percent of all baby bottles currently on the market ( 1999 )are
made of polycarbonate. As the poly in polycarbonate implies, this
plastic is a polymer -- a chainlike molecule constructed by linking
up individual units of a common chemical. In this case, each link
is a molecule of bisphenol A.

This clear rigid plastic is a mainstay of baby bottles, picnic
cutlery, unbreakable kitchen tumblers used to serve up milk and
other drinks, the carboys that hold bottled water, even the
cafeteria bowls used for soups.

Pollutants that emulate hormones -- especially estrogen -- have
emerged in recent years as a major environmental concern. Animal
studies suggest they might increase an individual's likelihood of
developing certain cancers. During development, exposure to these
environmental hormones also risks disrupting the normal growth and
function of reproductive tissues and the brain. Although roughly a
dozen animal or cellular studies on bisphenol A show a variety of
biological effects, whether these changes have implications for
people's health remains controversial.

Since then, a number of labs around the world have been probing to
see what else leaches bisphenol A. And the more scientists look,
the more they find. For instance, 4 years ago, the plastic resins
used to line roughly half of the food cans in Europe and 85 percent
of U.S. food cans proved to be a source of dietary bisphenol A.

They thought they were smart dumping TIN! Plstic is l00 times
more deadly!

The single most deadly thing you can do with baby's milk is
put it in a plastic bottle, but heat that in the bottle, the toxins
double. Throw the bottle into a Microwave, the atoms of the
food are arranged in a way that nothing on earth is. You are
guaranteeing yourself a dead baby. There is no excuse for such

laziness in a parent. 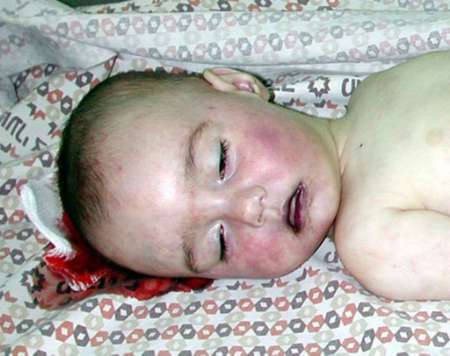 As a seventh grade student, Claire Nelson learned that
di(ethylhexyl)adepate (DEHA), considered a carcinogen, is found in
plastic wrap. She also learned that the FDA had never studied the effect
of microwave cooking on plastic-wrapped food. Claire began to wonder:
"Can cancer-causing particles seep into food covered with household
plastic wrap while it is being microwaved?"

Three years later, with encouragement from her high school science
teacher, Claire set out to test what the FDA had not. Although she had
an idea for studying the effect of microwave radiation on
plastic-wrapped food, she did not have the equipment.

Eventually, Jon Wilkes at the National Center for Toxicological Research
in Jefferson, Arkansas, agreed to help her. The research center, which
is affiliated with the FDA, let her use its facilities to perform her
experiments, which involved microwaving plastic wrap in virgin olive
oil.

Claire tested four different plastic wraps and "found not just the
carcinogens but also xenoestrogen was migrating [into the oil]...."

Xenoestrogens are linked to low sperm counts in men and to breast cancer
in women.

Throughout her junior and senior years, Claire made a couple of trips
each week to the research center, which was 25 miles from her home, to
work on her experiment. An article in Options reported that "her
analysis found that

DEHA was migrating into the oil at between 200 parts and 500 parts per
million. The FDA standard is 0.05 parts per billion.

Her summarized results have been published in science journals. Claire
Nelson received the American Chemical Society's top science prize for
students during her junior year and fourth place at the International
Science and Engineering Fair (Fort
Worth, Texas) as a senior.

On Channel 2 (Huntsville, AL) this morning they had Dr. Edward Fujimoto
from Castle Hospital on the program.

He is the manager of the Wellness Program at the hospital. He
was talking about dioxins and how bad they are for us. He said that we
should not be heating our food in the microwave using plastic
containers. This applies to foods that contain fat like baby formula

He said that the combination of fat, high heat and plastics releases dioxins into the
food and ultimately into the cells of the body. Dioxins are carcinogens
and highly toxic to the cells of our bodies.

Instead, he recommends using glass, Corning Ware, or ceramic containers
for heating food. You get the same results without the dioxins. So such
things as TV dinners, instant ramen and soups, etc., should be removed
from the container and heated in something else. Paper isn't bad but you
don't know what is in the paper.

Just safer to use tempered glass, Corning Ware, etc. He said we might
remember when some of the fast food restaurants moved away from the foam
containers to paper. The dioxin problem is one of the reasons.

To add to this: Saran wrap placed over foods as they are nuked, with the
high heat, actually drips poisonous toxins into the food. Use paper towel
instead.

Takao, Y., ... and K. Arizono. 1999. Fast screening for
Bisphenol A in environmental water and in food by solid-phase
microextraction. Journal of Health Science 45:39.

vom Saal, F.S., et al. 1998. A physiologically based approach
to the study of bisphenol A and other estrogenic chemicals on
the size of reproductive organs, daily sperm production, and
behavior. Toxicology and Industrial Health 14
(January-March):239.

Our 'POSTER-BLOGGER' is ANITA SANDS HERNANDEZ, Los Angeles Writer, Researcher, mother of 4 and career Astrologer. Catch up with her websites TRUTHS GOV WILL HIDE & NEVER TELL YOU, also The  FUTURE, WHAT'S COMIN' AT YA! FRUGAL LIFE STYLE TIPS,  HOW TO SURVIVE the COMING GREAT DEPRESSION, and Secrets of Nature, HOLISTIC, AFFORDABLE HEALING. Also ARTISANRY FOR EXPORT, EARN EUROS....* Anita is at astrology@earthlink.net ). Get a free natal horoscope "my money/future life" reading now + copy horoscope as a Gif file graphic! No smarter, more accurate DESTINY reading out there!