Makeup artist to the stars Judith Boteach thought she had found true
love when it took four people to carry all of the flowers and jewelry
lavished on her the day multimillionaire ARMS DEALER Yoav Botach proposed marriage.
(COUPLE's NAMES SO SIMILAR JUST A BIG COINKYDINK)

Boteach said she learned a month after their Orthodox Jewish wedding
ceremony that her groom hadn't obtained a California marriage license,
but she believed in their future together.

"I loved him," said Boteach. "I trusted him and he kept telling me (the
wedding license) wasn't necessary."

(Renaissance Graphic of SHYLOCK and his wife below,) 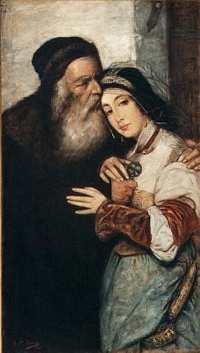 But their relationship ended unhappily, with Boteach kicked out of the
couple's Beverlywood home in her nightgown. And she is now embroiled in
a court battle for half of Botach's fortune - millions of dollars she
claims he promised her should the couple ever split.


"This is the largest palimony case in American history," said Robert W.
Hirsh, Boteach's attorney, who explained that his client cannot fight
for alimony since she and Botach were never legally married.

According to court records, Botach co-owns 144 commercial and other
properties in Los Angeles, as well as Botach Tactical, a nationwide
distributor of police and military equipment. But Boteach is seeking
access to financial documents to determine the defendant's assets.

"We would not be surprised if his net worth is $700 million," Hirsh
said.

But Boteach's lawyer, Richard G. Sherman, argues in court documents that
because his client is a "very wealthy man" he insisted that Boteach sign
a prenuptial agreement before the wedding to protect his assets. And,
Botach maintains, he never promised Boteach anything if they separated.

Sherman also says that it was made clear to Boteach that the couple's
1997 ceremony did not constitute a legal marriage because they did not
obtain blood tests or a marriage license.

"Judy had been married twice before and was well aware of the
requirements of California law in that regard," Sherman wrote. "Prior to
the wedding ceremony, Yoav had a private conversation with the rabbi ...
and Judy.

"In that conversation, Yoav announced that he wanted to make it clear
that their 'marriage' was not legal in California and that they were
going to get 'married' in a religious ceremony only. Judy consented and
the religious ceremony then took place.

"After the religious ceremony, Yoav and Judy resided together until
approximately August 2002 when they separated."

Hirsh - a Beverly Hills attorney whose wife's family was helped by Boteach's
family upon coming to the U.S. from Israel more than 25 years ago - said he
filed the suit to help Boteach and other women.

"Mrs. Boteach was the woman behind the man," Hirsh said of his
52-year-old client. "For almost a five-year period, Mrs. Boteach
assisted ... in making a fortune in real estate and, at the same time,
she ran the home. She cooked, cleaned, entertained world leaders and
other dignitaries."

The palimony case is the latest in a string of such suits filed since
the term was coined in 1977 after actor Lee Marvin's companion, Michelle
Triola, won a landmark lawsuit. She argued that based on specific
promises, a cohabitant can have property rights to the assets of another
cohabitant.

One of the largest palimony awards was granted in 199exp4, when an
Orange County jury ordered Mag-Lite flashlight mogul Anthony Maglica to
pay $84 million to Claire Maglica. The two never married but had lived
together for more than 20 years and she had served as executive vice
president of the Ontario-based company.

Boteach's story begins as one of 10 children born to a paint
manufacturer and housewife in Casablanca, Morocco, who moved to Los
Angeles in 1967 to escape religious persecution.

She attended Santa Monica Community College and beauty school. When she
was 17 - with the help of her first husband and her sister and
brother-in-law - she opened a Beverly Hills salon that grew to nearly
three dozen employees and catered to stars including Cher and Tina
Turner, according to Boteach and court records.

Over the next 20 years, Boteach acquired several other businesses,
including two kosher tortilla firms and a cosmetics and perfume company
that sold items through television infomercials in the United States and
France.

Meanwhile, Botach and his brother immigrated from Iran and opened a pawn
shop, according to court documents. In 1973, they began buying, selling
and operating commercial properties, forming Botach Management in 1989.

While their families had long known each other, Boteach said it wasn't
until the mid-1990s that she met her future husband when he began
attending her synagogue.

They hit it off and Botach proposed, Hirsh said, but when he asked her
to sign a prenuptial agreement, she refused and instead traveled to
Australia to visit her sister.

The two eventually reconciled and Hirsh said Botach relented on his
request for a prenuptial agreement. The two set a wedding date, and
Hirsh said Botach informed his bride that he had taken care of all the
arrangements.

"She showed up to get married, thinking everything was proper," Hirsh
said. "Then a month later, the subject of a license came up and he told
her, 'We don't need a license. We have an agreement and there is no
license' - that she would get half if they ever separated."

Boteach said she found out they didn't have a marriage license when she was
attempting to change her name on her passport.

In court documents, Boteach says she worked at Botach Management as the
real estate market "rocketed up," although she received no compensation.
And she alleges that Botach "severely beat" her on several occasions
after she refused to sign a post-nuptial agreement.

Boteach said she never reported the alleged abuse to the police because
she was "ashamed, scared and didn't know what to do."

Boteach filed for divorce, asking a judge to recognize that the couple
had a civil marriage.

But Superior Court Judge Rolf M. Treu found that the couple was not
legally married and could not be granted a divorce. Hirsh said the judge
suggested Boteach pursue a palimony suit.

In her palimony case, Boteach says the couple cohabitated from the
wedding ceremony until August 2002, when she was kicked out of their
Beverlywood home in her nightgown after refusing to sign a post-nuptial
agreement.

In a court declaration, however, Botach said he never made a deal with
Boteach or promised her any portion of his fortune.

"At no time, ever, did I ever enter any 'oral (verbal) cohabitation agreement'
with (Boteach), and all the allegations to the contrary are a sham,"
Botach wrote.

Hirsh said he expects another hearing in the case in the next two
months.

"She was blinded by love," Hirsh said of his client.

HOME WORK ASSIGNMENT. Check with divorce laws in your  state. Some states have COMMUNITY PROPERTY LAWS. The wife gets half of everything he made during time he was  married to her. She gets half the value of HOME, or if he already owned home, half the value of its increase during  those years. "THE MOORE MARSDEN ACT"

The formula used by California courts to calculate each party's interest in real estate is known as Moore Marsden or Moore-Marsden or Moore/Marsden. These are the names to two (2) California cases involving; you guessed it, dividing real property at divorce when one spouse purchased the property before marriage. DO GOOGLE THIS!

Our POSTER is ANITA SANDS HERNANDEZ, Los Angeles Writer, Futurist, mother of 4 and career Astrologer. Catch up with her websites  TRUTHS GOV WILL HIDE & NEVER TELL YOU, also The  FUTURE, WHAT'S COMIN' AT YA! FRUGAL LIFE STYLE TIPS,  HOW TO SURVIVE the COMING GREAT DEPRESSION, and Secrets of Nature, HOLISTIC, AFFORDABLE HEALING. Also ARTISANRY FOR EXPORT, EARN EUROS....* Anita is at astrology@earthlink.net ). Get a 15$ natal horoscope "my money/future life" reading now + copy horoscope as a Gif file graphic! No smarter, more accurate reading out there!

<=== BACK TO SECRETS OF MARRYING AND DIVORCING WELL

<=== BACK TO THE EMPIRE INDEX PAGE

<==== BACK TO THE WALL STREET MELTDOWN WEBSITE,  with SURVIVAL TIPS

<==  BACK TO THE WEBTECH FOR DUMMIES WEBPAGE

<=== BACK TO THE COLONIAL KITCHEN

<=== BACK TO THE CONVERSATION FOR DUMMIES INDEX