Serial killers HAVE NO Hobbies! HOW TO HONE OUR PROCESSES of LOGIC and weed out BAD BOYFRIENDS. 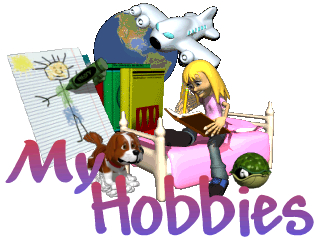 A THOUGHT just hit me while watching CBS "CRIMINAL MINDS."  (the fact that a thought broke in.....by itself is newsworthy. I watch the show so that won't happen) ALL SERIAL KILLERS (it turns out,) have no hobbies. The FBI BAU* team headed by Mandy Patinkin just totally mentally dismissed a suspect when they read in his file that he'd moved to Florida to pursue scuba diving.           *BAU = Behavioral Analysis Unit

EUREKA! It hit me! ANY HOBBY you adore would be enuf not to to go down the road of madness! Maybe the reason madhouses have kids building baskets! So if you were to build a thesis off this random bit of data, using it as a paradigm of logic, a thesis, what would it be? Come on, I invite you to extrapolate.

THE LOGIC CONTEST IS UP AND RUNNING!

ANSWER # 1  "Having a hobby may even prevent serial killing as it increases pride, reduces frustration in obsessive types."

#2 ENTRY is an email from a gal who shall go nameless, said "my ex just stared in a mirror at himself, never ever had a hobby." I gave a lengthy shudder and  shot her an email saying she was totally right to divorce him.

#3 Entry came in from BABS. "SERIAL KILLERS do too have hobbies! They often shoot photos of their victims and combine these with newspaper stories to make collages of their exploits on basement walls. And don't forget gourmet cuisine! Wasn't Jeffrey Daumer a master cook? I mean, you'd have to be to make human buttocks taste fairly fine."

Babs is a humorist like me, so we won't count her entry. (Serious themes evolved through humor get no respect. (sigh.) Speaking of which... did you ever see the Sean Connery movie NAME OF THE ROSE where the Renaissance monastery burns all of Plato's Treatises on Humor as they would cause mankind to be irreverent and sinful?

My son the workaholic (in Hawaii with a very busy wedding photo shoot biz, expecting his first child this Winter) wrote: "Mom, There are many people in this world who don't have a hobby or anything that occupies part or any of  their recreational time. (This is a kid who never had a hobby in his life, so he's defending BOREDOM in some way.) And these people are not serial killers. The opposite is true as well. Among serial killers in this world , some have had  hobbies other than their reprehensible hobby of killing people. (How would the kid know?) The lack of a hobby can't be  directly connected to the mind going mad and as a consequence killing  people becoming their way to vent steam."

"If you think about it serial killing is a hobby of sorts. It involves collecting. True it does and some of  these serial killers have thought of what they were doing as a hobby. But for most it was a sado-sex urge that needed satisfying at frequent intervals. Now if your young child (my son is getting close to the bone here,) thought that pulling wings off flies and  pouring salt on the snails was a hobby for them-- Or If your young child  collects dead animals and stuffs them, and displays them in their rooms  as some type of trophy, and then tells you that it was really tough to  catch and kill all these animals-- And if your young child tells your  "don't worry it's just a hobby " while you stare in horror, well you just  might have a future serial killer on your hands."

HMMMM.As I can't let my son win the contest,  CAROLYNNE! YOU HAVE JUST WON FIRST PLACE IN OUR PHILOSOPHY and LOGIC BRAIN SEQUENCING of a THESIS /Corollary CONTEST! Having a hobby indeed prevents men becoming serial killers! We are sending you a prize, "JEFFREY DAUMER's RECIPES FOR HOME COOKING" it will be thru the mail shortly.

Now, let's wonder what hobbies prevent a woman from becoming? I can hear my own brain clicking away on this one. I hear my brain threatening to crack, That straining noise like a floorboard under the weight of a gorilla...

WHAT WOULD WOMEN BE WITHOUT engrossing PASTIMES? LIke sewing their wardrobe, painting canvases and decorating the home, or like MAKING JAM, gardening, writing frivolous INTERNET PIECES. MY GOD I'm A POTENTIAL SERIAL KILLER! Unclothed, without my HOBBIES, a monster! You think not? You should see my piece "KILL ALL THE MUSLIM JIHADIST MEN, HILLARY." by HUMA Somebody.

There are a lot of hilarious extrapolations and leaps of logic to be made after watching CBS murder shows, no? Where will it end?

AGAIN, our THESIS: "SERIAL KILLERS NEVER HAVE HOBBIES." What do you make of it? If you sequence logic better than I do, where does this line of thinking go?

CHILDREN should have court mandated HOBBIES?  Cities should tear down the jails and build HOBBY CENTERS. WHAT OTHER nasty things do men do when they have no hobbies? Serial chicks, drugs, porn? IPOD metallica? ABSOLUTELY! I dated a man with no hobbies at all. Except that he was a superb conversationalist. He fascinated me for a lotta yrs, about thirty too many. His only hobby was story telling. Yarns. And it worked best for him, that is, when sexual affairs were the payoff. Good yarns= good sex. That became his hobby. (Screenwriting was a tedious bore. Two oscars made it only slightly less so. (The Boston Strangler was his flick. and THE SNIPER, (banned!) both about serial killers. However, he hated writing and wanted a break five times a day to go meet ladies, drink martinis, tell stories to them. Female laughter was what provoked his having a good self image. I know. I was a hobby of his briefly. You TOTALLY LOSE this kind of man when it threatens to become a real relationship for then it became important for him to go get more yarn spinning craft projects elsewhere which he did regularly during the years I wasted on him. I lost decades. He was a serial polygamist and I never knew it until he died intestate. That means without the balls to leave me a cent. And in those three decades aside from taking his yacht for a spin with ladies on board, (ladies he could tell tales to), not a hobby in sight.

So here's the last sequence in our brain train of logic, the caboose, the cruncher. DATE MEN WHO HAVE NO HOBBIES???? NEVER!!!!! or at least....be suspicious, VERRRRY suspicious of them! Give me a man who hunts, fishes, builds remote control airplanes.

Mankind synthesizes when we think. Boil Potions of logic and distill their essence; out of the beaker of the mind comes a single, distilled drop. It is this: TEST UNKNOWN, new men friends, ( of that genus called 'bachelorus'), to see how many damn hobbies they have. Story telling, martinis and yachting don't count!

Our 'POSTER-BLOGGER' is ANITA SANDS HERNANDEZ, Los Angeles Writer, Researcher,  mother of 4, grandmother of 6, also a career Astrologer. Catch up with her websites TRUTHS GOV WILL HIDE & NEVER TELL YOU, also The  FUTURE, WHAT'S COMIN' AT YA! FRUGAL LIFE STYLE TIPS,  HOW TO SURVIVE the COMING GREAT DEPRESSION, and Secrets of Nature, HOLISTIC, AFFORDABLE HEALING. Also ARTISANRY FOR EXPORT, EARN EUROS....* Anita is at astrology@earthlink.net ). Get a FREE  natal horoscope "my money/future life" reading now + copy horoscope as a Gif file graphic! No smarter reading out there anywhere near that price.


<====BACK TO THE OLIGARCH EMPIRE ARCHIVE


<=== BACK TO SECRETS THE GOV DOES NOT WANT YOU TO KNOW

<=== BACK TO THE MALTHUSIAN NEUROSIS PAGE

<===BACK TO WELFARE COOKERY

<===BACK TO FREE LIFE 101 SEMINARS, a 7 thousand file archive, republish what U want, FREE edit/ take my name off, POST & GET BIG AD REVENUE