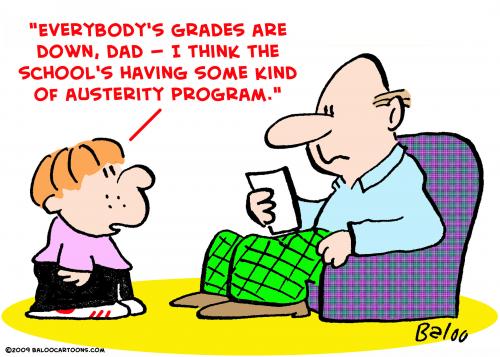 You know how credit cards penalize you when you owe too much? Same with countries that are in debt. AMERICA IS so deep in debt that the British Bankers imposed "AUSTERITY MEASURES" on us and the stats show up as this miserable joint in recession yet YOU DON'T EVEN REALIZE IT!

The ultra POOR can't tell you what's going on. They have no PC, no education, no house, no food stamps, no electricity, no server EMAIL, no verbal skills, & never will have as they now have twice the students in half the classrooms. Their safety nets of daycare for working mothers, SCHOOLS,  HOSPITALS after school care are all CLOSING.  TEACHERS are being wholesale FIRED. Social security stipends are lowered. (This writer gets 340$ a month SOCIAL SECURITY I'm 77 yrs old, and 280$ disability SSI, PRE OPEN HEART OPERATION AORTA problems and the two together pay half my rent but I can't get food stamps as I'm over the limit with above HUGE INCOME.) Seniors are forced to get jobs in a marketplace where even college grads can't find one. There were over 4 MILLION PEOPLE without heat this winter. Did you read about the Detroit Dexter Avenue Fire: Utility Shutoffs reveals Social Crisis in this city from which ALL BIG INDUSTRIES FLED MICHIGAN for GUATEMALA. WHY? Because they COULD. NAFTA LET 'EM.

Those concerned about the worsening social conditions in Detroit to participate in a fact-finding inquiry into the  fire that killed three. The Dexter Avenue fire was caused by a space heater being used to warm the house because DTE Energy had cut off gas and electric service to the two-story home in July, 2008. This tragedy was one of many similar cases. Since the end of last year, at least ten fire-related deaths have taken place in Detroit, the majority of which occurred in homes where utilities had been turned off and families were seeking to cope with freezing temperatures. This included a fire that resulted in the death of a baby on Detroit’s east side. But there were EIGHT MORE deaths there due to UTILITY CUT OFFS. 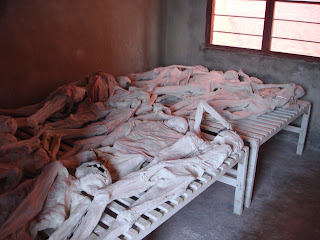 These deaths were totally unnecessary. No one should be forced to live
without basic necessities such as gas, electricity and water. Yet hundreds
of thousands are doing just that. And the situation is getting worse, not
only in Detroit but throughout the metro area and the entire country.

According to DTE Energy, the company turned off utilities to 221,000
households in southeast Michigan in 2009, a 50 percent increase over 2008,
when it cut off service to 142,000 households. With an average of 2.5
people in every household, this means more than half a million people, or
one in ten residents living in the area, were without utilities some time
last year.

Nationally, about 4.3 million households had utilities disconnected in
2009, up from 4.1 million the previous year. Applications for home
heating assistance have hit record levels, even as states across the
country are cutting funds to the program. (Currently you get one assist
with heat, once every TWO YEARS. So that means one BILL in winter every
two years, you are protected. The other winter months you freeze or die.) If
it gets worse, as is expected, it'll be what? A month every THREE WINTERS?

But we shouldn't complain. Some countries have no AID at all. GREECE is so in
debt to the world banks, that the bankers mandated 'austerity' measure' for
the country. They are the same ones we've got. The new austerity program includes
tax increases and spending cuts totalling EURO 4.8 billion ($6.5 billion). The cuts are
the equivalent of 2 percent of Greece's GDP. Its provisions include a
sales tax increase from 19 percent to 21 percent; higher excise taxes on
petrol, cigarettes and alcohol; a 10 percent cut in public sector pay; a
30 percent cut in public sector salary schemes and a freeze on public sector pensions.

The latest cuts, the third in as many months, are far deeper than those announced previously. They will have a devastating impact on millions of working people, the unemployed and pensioners in a country where a quarter of the population are already subsisting at minimum wage levels.

In the USA, the economic recession and mass layoffs in the auto industry have made an
already devastating situation unbearable in Detroit, where half the working
population is without a full-time job. In a scene reminiscent of the soup
lines during the Great Depression, last October, 50,000 people lined up at
Cobo Hall seeking housing assistance. Officials acknowledged, however, that
only one out of 23 who applied for assistance would get any.

All of the official institutions --- the Democratic Party, the news media, the
UAW and other trade unions and so-called civil rights organizations like
the NAACP---have been silent about this crisis. None has carried out a
serious investigation into the scope of utility shutoffs and the tragedies
they produce, let alone taken any action to stop them. That is because in
one way or another they all defend and benefit from an economic system that
puts the profits of corporate CEOs and wealthy investors before the lives
of ordinary people.

That is precisely why the SEP has initiated the campaign for a citizen’s
inquiry into the Dexter Avenue fire, utility shutoffs and the social crisis
in Detroit. We call upon all Detroit-area workers, unemployed people and
youth to attend and participate in the fact-finding inquiry being held on
March 20 at Wayne State University. This will be an opportunity to speak
out and provide testimony about utility shutoffs and their impact on
working class families. We are also calling on academics and experts with
knowledge of the crisis in Detroit to provide testimony at the fact-finding
inquiry. What happened at Dexter Avenue in DETROIT? ANOTHER group of COLD
people, poor people burned up.

Killed in the fire on Dexter Avenue on January 5, 2010 were Marvin Allen,
62, Tyrone Allen, 61, and Tyrone’s girlfriend, Lynn Greer, 58. Ronald
Gross, the nephew of the Allen brothers, jumped out the window and barely
escaped with his life.

The space heater was being used as temperatures dropped to 4 degrees
Fahrenheit, with a wind chill of -15. DTE had cut utilities to the home in
July 2008, a full year-and-a-half before the fire. Just before the
Christmas holidays, in December 2009, Greer met with DTE and arranged a
payment of $181.00 to have power restored. For unexplained reasons,
however, services were not restored.

Family members and neighbors say the delay may have been because DTE had
previously dug up the gas hook-up in the yard. After the fatal fire, DTE
tried to justify its actions by saying the house had an illegal hook-up to
power lines and the family had been stealing electricity. A spokesman for
DTE complained that the company had lost $100 million in profits due to
such hook-ups, while acknowledging that the problem was getting worse due
to the economic downturn.

At the same time, tens of millions of workers are struggling to pay their
bills due to the economic crisis. Ordinary workers are being told to do
without, tighten their belts and choose between feeding their families or
paying their utilities, while the government hands trillions of dollars to
the Wall Street bankers who created the crisis.

Many thought that the election of President Obama and the defeat of the
Republicans would put an end to government policies which helped only the
rich. Instead, Obama has proven to be no less a tool of big business and
the banks than Bush. The same is true of Mayor Bing and Governor Granholm.
Why you should join the inquiry

The citizen’s inquiry will expose the social conditions that led to the
Dexter Avenue fire and similar fires. It will take testimony from workers
in the Detroit metropolitan area on:

By laying bare the real circumstances for the fire deaths on Dexter Avenue
and exposing the social conditions which underlay them, the greed of the CEOS
and the spiritual impoverishment of the Capitalist system that allows THINGS
HUMANS NEED TO LIVE....to be charged for usuriously, unduly enriching
CEOs, ISSUE JOURNACTIVISTS can assist in developing the consciousness
which the working class needs to fight back. TO DEMAND ALL UTILITY
companies be NATIONALIZED and run as NON PROFITS. THe salary of
the top bureaucrat will be the same as the lowest worker.

THAT PLAN will play an important role in laying the basis for the
development of a political movement of the working class against the
capitalist profit system, which will guarantee to all the right to safe and
affordable housing, a secure job, health care and education. AND HEAT!

THE ACTIVIST should utilize the internet and become  a POSTER which is what ANITA SANDS HERNANDEZ, Los Angeles Writer, mother of 4 and career Astrologer does. She finds 'telling' articles, posts them  at her website then sends the URL out to her TWITTER friends, her FACEBOOK readers and to her extensive EMAIL lists, --to people who she's noted are thinkers, do-ers and are likely to pass the information on.  The themes? HOLISTIC HEALING without doctors, but also for CATS AND DOGS  ,  TRUTHS the GOV WILL HIDE & NEVER TELL YOU,  The  FUTURE, WHAT'S COMIN' AT YA! FRUGAL LIFE STYLE TIPS,  and ALL the things you'll need to do to SURVIVE the COMING GREAT DEPRESSION,  Also cottage industries galore, like ARTISANRY FOR EXPORT, EARN EUROS... (and more.. see the dozen themes below) Anita is at astrology@earthlink.net ). Get a 35$ natal horoscope "my money/future life" reading now + copy horoscope as a Gif file graphic! No smarter, more accurate career reading out there!

<===BACK TO MONEY SECRETS ONLY STREET SMART EXPERTS KNOW

<==== BACK TO THE SHOW BUSINESS  ARCHIVE for writers, producers and documentary makers

<=== BACK TO THE CONVERSATION INDEX

<=== BACK TO  REAL ESTATE BUYING FOR THE POOR PERSON. IT CAN BE DONE!


<==BACK TO ACTIVISM THAT WORKS AND IS FUN TO DO

<===BACK TO THE CONSPIRACY INDEX PAGE

<===BACK TO "WHO ARE THESE MASKED MEN KEMOSABE?"

<===PORTAL to 7,000 ARTICLES FOR FREE, REPUBLISH, THEY ARE BLOG STUFFERS & ARE FOR YOU TO EARN AD REVENUE