THE VILLARAIGOSA GANG AND THEIR BOOMING CAR THEFT BUSINESS 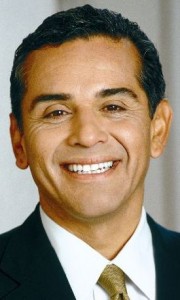 There's a new crook in town. Mayor Villaraigosa, above. The government. CALIFORNIA now runs CHECK POINT CHARLIES to steal our cars at gunpoint. I don't know if we should blame Ahnold Schwartzeneggar for it or if it's just an HELL-A thing, i.e. Mayor Tony Villaraigosa. -- but L.A. has Car inspection Check Point Charlie stops manned by armed police and for a very nefarious purpose. REVENUE STREAM.  California made forty million in one year off the fees and resales related to these confiscations from poor citizens. If that ain't highway robbery, tell me what IS!

"Have you been drinking?" is what the cop says but what they really want is to see the license, insurance and registration. Because there are hardly any drunks out. But there are PUHLENTY of lacks of one of these three costly little papers (easily 1500$ for all three,) and our city confiscates the car if no license/reg or insurance is in your hand and they IMPOUND IT. I know because last nite it happened to me. My car is history. It was my only way of getting food, cuz in the burbs we're miles from markets. I will never see it again. l month later they release it to YOU if you have 3 thousand bucks,  towing, impound & penalties. I'm 70, a candidate for open heart surgery, and now will be on a bicycle to feed myself and the cats. FOR THE REST OF MY LIFE or until I get hit by a car. Because I can't pay the two thousand dollar TICKET or the THREE THOUSAND dollars for the car. I'm still working on last month's RENT!.

Met this handsome Lincolnesque hippie at Taco Bell. I noted he'd parked his bike outside, noticed the rags and tatters. "You safe on a bike?" "Hit forty times, Forty accidents", he said. "A few with hospitalization and surgery. Nobody knows how to drive here. Law says I must be in street, never on a sidewalk.'  I shuddered and never forgot this chance meeting.

So when I recently read about the tidal wave of car theft victims, these Check Point Charlies  in our local newspaper and the reporter came right out and implied that the punishment of a MONTH WITHOUT one's car was unconstitutional. It ruins lives. We're all so marginal now. I could see this little Shanghai Peking stream of bicycles making its way down the 405 at dawn, the workers heading into the city

The Villaraigosa Check Point is still fairly new but it  happened to the exact pal I hit up for a used bicycle when MY CAR was swallowed by the Dragon..( I told my chum,  I'll pay you if you have an old one. He's a senior. he's got a bad back,  can't even drive a car, needs a chauffeur. He said he'd give his old bike  to me free. Say a prayer that Bruce's spine gets healed.)  Well, he and the chauffeur got stopped near his Mulholland home, coming down Kanan Dune canyon road in a Caddie. Back side of Malibu canyon and the cops had this check point. Insurance a week late, they took the Caddie left the cripple in the street. Everyone in traffic gets stopped, don't even THINK of running it. They ask you to call someone to pick you up. In my case, they called my son who lives 130 miles from here.

Cruel as blazes but get used to it, Hell.A. They do it ALL OVER THE CITY NOW it's a total scam, cruel to working stiffs and it was in news and all. We all know about it, but how do we stop it?

And what makes them DO it is MONEY! THE CITY SELLS EVERY car in auction,  makes millions --off our backs. Hey, I'd prefer a whip and chains to what Cities do to us now. Does your city do this?

In fact, today, May 2010, two Armenians with accents, guys with the biggest online Toy Store in America, were driving their Rolls Royce down Melrose. Cops must have been told 'grab any ethnic in a valuable car, stop them on suspicion of driving while being foreign and impound the car so that we can sell it.' The gov also makes you wait a month to get your car, so by then, even if you prove it's yours, you pay 3grand to the gov. So these cops (four units, it took,) throw the two honest, legit brothers nose down on cement at gunpoint in front of daytime crowds on the posh boutique row, and they make the sweet girl who is dating the younger brother, his girlfriend, stand arms up. They accuse her of being a prostitute, ask how much she earned, they check the vin#, the papers, see everything is kosher but still arrest the men and impound the car. I will be adding more to this page when it makes our papers. 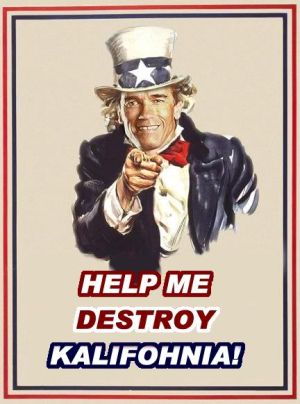 AHNOLD, FIX THIS. PUHLEEZE. THIS IS A NAZI LAW!
and you're using our chicano mayor in your gang.

CASHING IN ON CHECKPOINTS (VALLEY DAILY NEWS by Char Miller)

"EARLY every weekend this summer checkpoints were mounted along busy Southland arterials. An intimidating cadre of well-armed police has stopped thousands of cars each night, asking drivers two questions: Do you have a valid driver's license? Have you been drinking? Answered correctly, you can get waved through. Fail to produce the requisite identification, or appear to have thrown back a few, or speak Spanish, and you're in trouble.

My wife and I recently had a front-row seat to checkpoint discrimination when we were stopped on Foothill Boulevard late one Friday night.

The newly wheel-less faced more than an evening of inconvenience. If their license had expired or they had been driving without one, their vehicle would be held under lock and key for 30 days. (If charged with DUI, you can reclaim it the next day.) This month-long loss of transportation has a devastating impact on those who drive to work - and who doesn't in L.A.?

Magnifying this blow are the punitive fees towing companies and police departments charge to release an impounded automobile. In Latino-dominated Baldwin Park, for instance, the per-car tab runs to nearly $1,500; storage fees for the month make up the bulk ($1,350), and the rest comes from the city's vehicle-release fee. When families cannot pay, Baldwin Park gets a cut of the abandoned car's sale at auction. (all cities do)

This modern-day stick-up has become a bonanza. At its early August checkpoint, Baldwin Park officers snagged 150 cars, netting the city a whopping $38,400. Its take for the past fiscal year alone amounted to $338,000. In Bell, officers had daily quotas for impounding cars, a strategy that two years ago generated $834,000 and this past year netted $770,000. That's where the MAYOR embezzled a million dollars with inventive bookkeeping and graft. More striking still was Pomona's haul: its 2007-08 checkpoints allegedly boosted local coffers by $1million. (L.A. has eighty separate small cities called charter cities.) EIGHTY. If each does a million, that's starting to be a good living.

These impressive returns have sparked a gold rush. In 2009, according to California Watch, a nonprofit investigative team, checkpoints throughout California raked in an eye-popping $40 million in fees and fines. Police overtime pay, underwritten with federal dollars, amounted to another $30 million. Fleecing the migrant, poor and powerless is big business.

Yet profiling drivers is of questionable legality. California Watch and other media investigations have revealed that only a fraction of the cars hauled away are the result of a DUI. At a recent checkpoint in Claremont, 1,570 cars were stopped, but only two impoundments were alcohol related. Instead, everywhere police are seizing cars from unlicensed drivers, the overwhelming majority of whom are Latino. The sanction for such seizures, the 9th Circuit Court of Appeals declared in Miranda v. City of Cornelius (2005), is suspect.

No surprise then that checkpoints have sparked heated protests. Grassroots activists steer cars away from them by waving placards reading: Red en Adelante! (Checkpoint Ahead). Angry citizens have jammed city council meetings to challenge their political legitimacy. The Pomona chief of police was forced out of office.

This local activism may seem small-scale but it has the potential to shift the larger political dynamic. In the book "The Grapes of Wrath," John Steinbeck noted it was this kind of personal, street-level resistance that turned the tide for an earlier generation of the harassed, car-driving migrants. The "little screaming fact that sounds through all history," the novelist affirmed, is that "repression works only to strengthen and knit the repressed."

Char Miller directs the Environmental Analysis program at Pomona College and is editor of "Cities and Nature in the American West."

Our POSTER is ANITA SANDS HERNANDEZ, Los Angeles Writer, Mother of 4 and career Astrologer. Catch up with her websites  TRUTHS GOV WILL HIDE & NEVER TELL YOU, also The  FUTURE, WHAT'S COMIN' AT YA! FRUGAL LIFE STYLE TIPS,  HOW TO SURVIVE the COMING GREAT DEPRESSION, and Secrets of Nature, HOLISTIC, AFFORDABLE HEALING. Also ARTISANRY FOR EXPORT, EARN EUROS....* Anita is at astrology@earthlink.net ). Get a 15$ natal horoscope "my money/future life" reading now + copy horoscope as a Gif file graphic! No smarter, more accurate career reading out there!

<=== BACK TO THE MALTHUSIAN INDEX PAGE - "WHAT SARDINE CAN?"

<==== BACK TO THE SHOW BUSINESS ARCHIVE, for wannabe writers, producers, video documentarians