In Heaven, there's a special Room for Infants whom George W rubbed The Wrong Way.

Infanticide as "Liberation" and then, Hiding the Dead Babies 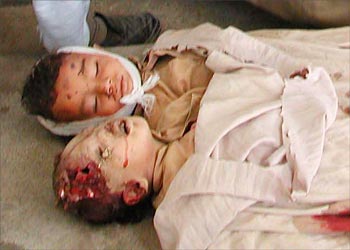 The Bush Administration started the genocide of babies and quickly became notorious for hiding information--even ceasing to collect it. Now that policy of obsessive secrecy is being applied to the so-called war on terror.

The latest effort to bury bad news comes from the puppet Iraqi "government" in Baghdad, where the so-called Health Minister Khodeir Abbas has issued orders to hospitals and other agencies to cease collecting data on civilians killed by occupation forces. The Health Ministry, it must be noted, is run under the direct supervision and authority of L Paul Bremer's Coalition Provisional Authority, Iraq's real government. The count of civilian dead, which was being directed by Nagham Mohsen, the head of the ministry's statistics department, was proceeding well, and according to Mohsen, who was interviewed by Associated Press, could have been accurately completed. Nonetheless, it was summarily halted, with no reason given. The reason is pretty obvious, though.

Just as the Bush administration has been cutting health statistics gathered by the U.S. Department of Health, and jobless statistics gathered by the Department of Labor, just as it has hidden the returning dead and wounded from Iraq and Afghanistan from the media and the public, it wants to hide the horrors that the U.S. military is inflicting on the civilian populations of Iraq and Afghanistan--particularly now that the brutality and aggressiveness of the counter-insurgency campaigns in both those countries is being stepped up.

I suspect that the murder of 15 children in two separate U.S. operations in Afghanistan over the last several days (time of this article being written,) has a lot to do with this decision to hide Iraqi civilian deaths.

Needless to say, the dead civilians are not being hidden from the Iraqis, or the Afghans. The families get to bury their dead, and the grapevine which has long served as the news media in such societies will not just spread the word, but may even amplify the horrors in the passing. So who is the Bush Administration really hiding these attrocities from? Why, us of course.

Who knows how Americans would react at seeing babies and little children, or pieces of children, strewn around battle sites, or at hearing that hundred of kids are being killed by U.S. troops and bombs? My guess is not very well.

The American media has done a great job of turning American wars into bloodless video games, a deception which has produced a wide-spread macho attitude of "bomb the hell out of 'em" as the initial response to perceived affronts to America. The harsh reality, though, is that when American planes drop a 2000-lb bomb on some suspected terrorist "target"--usually a house of some
kind--not only does it destroy everything in it, including whatever family members may be there, but it usually levels or seriously damages many surrounding buildings, and of course the people in them. The military used to call such bombs "blockbusters" in the good old days of World War II, a term which gives a much better description of how inaccurate--and how destructive--these devices are than the modern term "precision guided munition".

The Bush Administration knows that it was pictures of dead babies and napalm-scarred children in Vietnam, as much as anything else, that turned many Americans against that war. They know that the dead babies of Afghanistan, and the slain and crippled children of Iraq, if similarly counted and displayed to the American people, would likely have a similar effect.

Hence the new order to cease counting the civilian dead in Iraq. Just as it did in Afghanistan. But it is MILLIONS and all civilians! 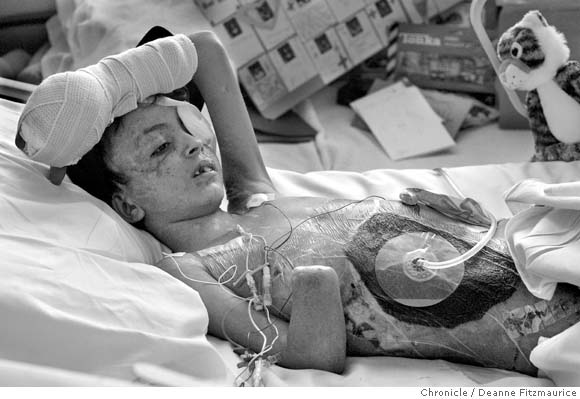 The whole thing is an outrage. The first thing reporters ask when they go out to cover an earthquake, a plane crash, a house fire or a car wreck is, "How many people died?" Think about the incredible amount of ink and video tape that was expended covering the issue of exactly how many people actually died in the World Trade Center attacks. But a war? Heck, who cares how many civilians died? Because they played us like LUTES and told us we should hate them for doing the WTC 911 when they did not.

Journalists in Iraq should insist on answers to this question and if they can't get one, they should do as the Associated Press did in the April-June period, surveying Iraqi hospitals and morgues on their own. An adapted version of the chant that anti-war marchers used to taunt Lyndon Johnson during the 1960s needs to be a reporters' refrain in Baghdad and Washington today:

Bush's war, Bush's war, How many kids has he killed so far? HUNDREDS OF THOUSANDS. Maybe a million. Add his father's tally in 1990 to that? Definitely a MILLION BABIES. A modern genocide with PROPORTIONATE STATS FOR CHILDREN IDENTICAL to the one which Hitler did, only the TEXAS PETRO-DRILLERS-SERVING  BUSH clan did it. And they got you to go along, making you hate all MUSLIMS.

One day the planet will blame YOU for standing by and doing nothing. Except that you DID SOMETHING> You waved a flag and you went with BUSH, voted him in and were seduced by FASCISM! Get to know the thing that seduced you. Click on that word because it has been injected into your bloodstream by propaganda pro’s. Only understanding the virus can you develop anti-bodies.

Our POSTER is ANITA SANDS HERNANDEZ, Los Angeles Progressive Researcher / Writer, Mother of 4 and career Astrologer. Catch up with her websites  TRUTHS GOV WILL HIDE & NEVER TELL YOU, also The  FUTURE, WHAT'S COMIN' AT YA! & HOW TO SURVIVE the COMING GREAT DEPRESSION, and Secrets of Nature, HOLISTIC, AFFORDABLE HEALING. Also HOW TO LIVE on A NICKLE, The FRUGAL PAGE. and 50 other themes that appeal like GETTING ON THE DOLE, HOW TO NEVER NEED A VET FOR YOUR PET .. HER MAIN PAGE WITH CLICKABLE PORTALS is THE ASTRAL WEBSITE! Anita is at astrology@earthlink.net ). Get a 35$ natal horoscope "my money/future life" reading now + copy horoscope as a Gif file graphic!

<= BACK TO  "HOW THE ENRON SYNDROME  BECAME AN EPIDEMIC"

<===== BACK TO THE LUCK IN LOVE WEBSITE, GREAT  IDEAS FOR GIRLS TO SOCIALIZE ON HIGH

<===== BACK TO THE PARTY INDEX FOR COMMUNITY, FOR FUN or for ACTIVISM

<====START YOUR OWN CHARITY, CHANGE THE WORLD ARCHIVE, GIVE YOURSELF TOP SALARY. IT IS LEGAL.

<=== BACK TO THE PROPAGANDA TRIX GOV USES ON YOU

<==BACK TO THE REAL ESTATE INDEX PAGE

<===BACK TO THE EMPIRE INDEX STUDY ARCHIVE

<====BACK TO THE PSYCHOLOGY INDEX PAGE; EARN 100$ the HR doing TANTRUM YOGA "TEACHING"

<==BACK TO HOW TO FIND FREE MONEY

<===BACK TO THE POVERTY INDEX PAGE

<===BACK TO THE HARD TIMES INDEX PAGE

<===BACK TO HOW JUSTICE/ COURTS DESTROY THE LIVES OF THE POOR

<== MILITARY WIFE GOES TO JAIL FOR NOT MOWING LAWN

<=== BACK TO THE VULTURE SANDWICH our CHARITY IDEAS INDEX PAGE

<==== BACK TO THE PORTAL TO 7,000 ARTICLES, REPUBLISH ALL OR ANY FREE, ATTRACT AD REVENUE TO YOUR SITE


<====BACK TO GASSING THE KURDS, ANOTHER WEBSITE  WITH THIS SAME, BUSH CALLOUSNESS INFO.

<=== BACK TO THE TRUTHS THE GOV DOES NOT WANT YOU TO KNOW!

<=== BACK TO THE REAL SKIVVY ON OUR POLITICIANS WEBSITE