Brit Websites published advice to  student FEE protesters  on how to avoid arrest.
FITWATCH BLOG SITE (TERROR TIPS FOR KIDDIES) GOT CLOSED
DOWN by COP E-SQUAD. WITHOUT their TIPS, KIDS GOT ARRESTED! 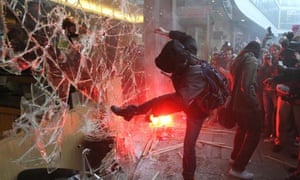 Thousands of unruly British STUDENTS protested SCHOOL FEES TRIPLING.
You know kids. They blasted the glass walls off the front of a government building.
The Police acted immediately to arrest them and to close down anti-authoritian
blog "Fitwatch" which had warned the guilty parties how to avoid arrest by changing
their 'looks.' Too late; the cops already had photos of the students who actually pounded and
broke very huge, costly glass windows in the violence. THEY ALL GOT NAILED. With police
records they'll never need college again.

Students had demonstrated against tripling of university fees doing so at Conservative Party
headquarters (accurately figuring that BIG BROTHER  had created the tuition tripling as part of
austerity measures where GOVS traditionally take it out of the hide of the poorest sectors.)

In the wake of the riot, more than 70 websites published guidance to student protesters
about avoiding arrest, in defiance of a police ruling that doing so was unlawful. (We give
that DANGEROUSLY ANTI-AUTHORITARIAN (not) advice below)so keep reading.

The anti-police blog Fitwatch was suspended after detectives
from C011, the Metropolitan police's Public Order branch, told the
company hosting its website that it was "being used to undertake
criminal activities" LEGAL ADVICE TO GLASS BREAKING CRIMINALS.
But it wasn't glass breaking in itself.

In a blogpost published hours earlier, Fitwatch gave advice about
avoiding arrest to students involved in last week's protest at the
Millbank headquarters of the Conservative party. Fitwatch was removed
soon afterwards, but tonight the offending blogpost, which recommended
that students "get rid" of clothes they wore at the demonstration and
change their appearance, had been republished on an additional 78
websites, including Facebook.

Many of the websites republishing the material were run by political
activists, who disseminated the material via Twitter in what they
described as a campaign to show the futility of police censorship.
POSTER'S NOTE: All mirror sites And FITWATCH ITSELF GONE,
BANNED, EXTINGUISHED now. Disappeared.

Fitwatch campaigners said they planned to get their original website
rehosted within 36 hours, adding that it was also likely that they would
republish the offending article.

In its original letter to Fitwatch's website hosting service –
JustHost.com – the Met's e-crime unit asked the domain provider to
suspend the website "for a minimum of 12 months". The letter, seen by
the Guardian, said the guidance to student protesters was "attempting to
pervert the course of justice" and "authority to close the website" had
been given by an acting detective inspector. The Met said in a
statement: "We were concerned this website was giving information about
destroying evidence. We drew this to the attention of the internet
infrastructure providers and they suspended the site."

The force declined to say whether it would take the same course of
action against dozens of other websites that published a verbatim copy
of the guidance.

A largely peaceful demonstration against the proposed increase in
tuition fees turned violent  when a minority of the 50,000
protesters targeted Millbank. Around 200 entered the building and some
reached the roof. During a period of rioting, windows and furniture were
smashed and, in the most serious act of violence, a fire extinguisher
was thrown towards police from the roof.

More than 50 people have been arrested, including an 18-year-old
questioned on suspicion of attempted murder for throwing the fire
extinguisher. Yesterday police released CCTV images of an additional 13
people they wanted to question over the disturbances. The Daily
Telegraph had previously launched its own campaign to identify student
protesters, posting photographs of activists it suggested had been
involved in criminal activity.

The Fitwatch blogpost was presented as a response to the Telegraph's
initiative, which it described as an "irresponsible and frenzied
shop-a-student" campaign. Issuing guidance to students who might be
worried they would be identified, the blog suggested they consider
getting rid of clothes, spray cans and "dodgy texts/photos on your
phone". It also recommended changing appearance. "Perhaps now is a good
time for a makeover," said the post. "Get a haircut and colour, grow a
beard, wear glasses. It isn't a guarantee, but may help throw them off
the scent."

It added: "The police often use the psychological pressure of knowing
they have your picture to persuade you to 'come forward'. Unless you
have a very pressing reason to do otherwise, let them come and find you,
if they know who you are."

"This (ABOVE) was us in the old days, student leftists, pot smoking hippies with
liberal political attitudes. It soon became necessary to DISGUISE ourselves. They'll never know it was us. We became the Best Republicans Money could Buy.
Does Billie look all frizzy? NO! Do I look all happy and bright eyed? No. But the
best disguise of all: during 8 yrs of our presidency, we didn't do one good thing
for poor people. In fact....we took away stuff! Like welfare! WOTTA DISGUISE, EH?

I FOUND THIS, "HOW TO AVOID ARREST"

How to deal with police encounters, a training video. (knock knock on door.)
Can I help you officer?

I don't know anything about that, sorry officer. / There's none of that here, officer.

I do NOT consent to being searched.  (Calmly repeat if necessary, and then add...) Do you have a search warrant? No? Then am I being detained or am I free to go?

If you are detained, remain calm and stop speaking (Full name and home address only and that's it) and prepare for a LONG day or night and make note of EVERYTHING that happens to you and get that free lawyer they give you ASAP and explain everything that just took place.

Pretty simple, isn't it?  Memorize it.

Best thing you could ever do is not commit any crimes whatsoever - however whether you are innocent or guilty, until a court of law decides such about you (which is a whole other discussion) YOU ARE INNOCENT and to be treated as such by police and everyone else in society.  Professional liars licensed by your federal or state/provincial government make for lousy testimony in court and your behavior and the testimony of witnesses or friends and family about the incident in question can save your life (jail is not pretty - you'd only learn more about real crime there than anywhere else anyway, ironically).

You have rights - USE THEM every moment of every day.  Welcome to self-sovereignty and liberty.  Welcome to your life in a truly free and democratic society.  If your life does not appear this way currently, start by taking your OWN power back and never fear police - but DO remain VERY cautious about those who have a "legal right" to LIE to you about EVERYTHING.  Frankly I can NEVER trust ANYONE with a license to LIE and make up BS stories about anyone or anything.  There is no honour in being a KNOWN LIAR sanctioned by anyone else who pays people to LIE for PROFIT to both involved.

Liberty appears highly attractive to many but is a heavy burden to carry for those who don't have the backbone to support it.

Our POSTER is ANITA SANDS HERNANDEZ, Los Angeles Writer, Futurist, mother of 4 and career Astrologer. Catch up with her websites  TRUTHS GOV WILL HIDE & NEVER TELL YOU, also The  FUTURE, WHAT'S COMIN' AT YA! FRUGAL LIFE STYLE TIPS,  HOW TO SURVIVE the COMING GREAT DEPRESSION, and Secrets of Nature, HOLISTIC, AFFORDABLE HEALING. Also ARTISANRY FOR EXPORT, EARN EUROS. Anita is at astrology@earthlink.net ). Get a 35$ natal horoscope "my money/future life" reading now + copy horoscope as a Gif file graphic! No smarter, more accurate career reading out there!

<==== BACK TO THE SHOW BUSINESS  ARCHIVE, for SCREENWRITERS, PRODUCERS and DOCUMENTARIANS in any CITY