TWIN ATOM BOMBs for the SNAIL WAR!Last year, my seedlings 'disappeared' as if the Guatemalan Military had plantnapped them, by darkness of night! Worse, I finally realized that the reason that baby lemon tree didn't have a single leaf on it for the last five years was snail munching! I had to face the fact that I needed GRANULES, no matter what the cost! I who never buy anything went out and bought some snail granules. POWERFUL MOJO that SNAIL STUFF! 8$ a box, the big EIGHT. Numerology calls 8 the DEATH NUMBER! Well, it is!

I lightly scattered a quarter of a big box of snail poison around the whole front and back gardens. Next day, all genocides of recent century were dwarfed by the legions of upside down enemies....they died by the trillion. THE DREADED CHOWDOWN that destroyed my baby lemon tree out front. Nobody even knew it was a tree. Five yrs it's been there --never a leaf on it. The poor baby was struggling to put out one leaf maybe and then that leaf would disappear. I THOUGHT maybe snails. I maybe over the years got a few snails at night that seemed to get near it, working on tip toe with flashlight.

What I didn't now was that those leaves were being consumed by brigades, cuz today after putting snail meal out  I saw MURDERED LEGIONS of molluscs. There had to be a PICTURE OF ME in SNAIL HEAVEN with "REWARD FOR INFORMATION LEADING TO CAPTURE OF THIS WOMAN" written under it!  I am wanted for MOLLUSCIDE! I thought I needed poison, well I WAS SOOOOOO right! They showed it, themselves -- dying at their favorite SNACK SPOT!

I also bought 2 four-packs of tomato plants, 2$ each and planted all 8 tomato plants in the compost area yesterday, working soil vigorously free of lumps, giving each a heavenly space and surrounding it with droplets of snail poison. EVEN some molluscs showed up there and gave it up in a vomit of slime.

I am so comforted by all this, I can't tell you. Now I'm HOPING HOPING I Can get that lemon tree to come back.

2008 UPDATE.  The lemon never came back. GAD, what it has suffered all this time, nightime attacks, pillages, rape....and it could never communicate the horror to me! I feel like the mother of an abused child. But on the bright side, a mother POSSUM moved in, a gal with an appetite and she ate all my snails and slugs! 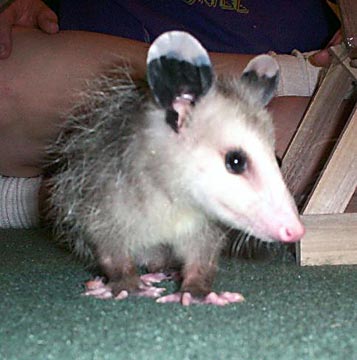 My Mom says eat all the snails and slugs I can. I'm only obeying orders!
Hey, keep the cornish game hen bones coming. Love those things!

One night my pal the animal lover commented on a bleeding possum, outdoors. A dog had chewed her hide a tad. We fixed her up and left her in a nearby garden. The next year she came to my door, well, to my garage door. She found a subterrenean hole and there, she set up camp. She took stored clothing, dragged it into the back of a cupboard that was empty, gnawing her way into it, and made a 15" diamter nest, ring shaped. I found it in summer when they weren't using it.

At night I hear the mother, father and babies waltzing,scrimmaging, moving boxes around. At midnight they start their lumbering exodus into the front garden around to the side, through the fence, then  they climb up into the hollow section of the stacked woodpile as that's where I leave plates of garbage, poultry bones, cut up apples from the dumpster at the 99c store. If I'm silent, I can watch them munch through the window of kitchen door.

I feed the possums well. Anything that gets stale I put out, fruit, oatmeal, bread. I like the critters. Two reasons. When the depths of this RECESSSION hit, I've got one shot and they're meat right on the property. Second, because they hate snails as much as I do. THE ENEMY OF MY ENEMY is my FRIEND, right? Guiding principle of the Axis Powers, (Germany & Russia).

After the possums munch my hors'douvres, they go for a dessert of garden snails. There is not a single snail left anywhere in the garden. And precious few slugs.

THE SNAIL BIBLE WEBSITE. Everything you ever wanted to know about slime.

Our POSTER is ANITA SANDS HERNANDEZ, Los Angeles Writer, Futurist and Astrologer. Catch up with her websites  TRUTHS GOV WILL HIDE & NEVER TELL YOU, also The  FUTURE, WHAT'S COMIN' AT YA! & HOW TO SURVIVE the COMING GREAT DEPRESSION, and Secrets of Nature, HOLISTIC, AFFORDABLE HEALING. Also HOW TO LIVE on A NICKLE, The FRUGAL PAGE.* Anita is at astrology@earthlink.net ). Get a 15$ natal horoscope "my money/future life" reading now + copy horoscope as a Gif file graphic!