FROM RAGS TO RICHES - The MODERN RAGPICKER 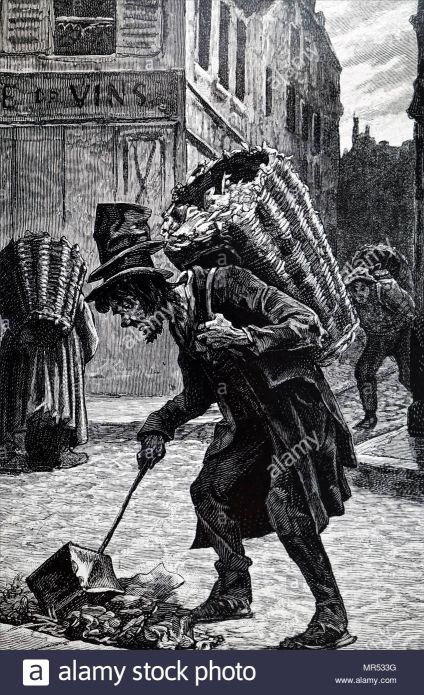 It is an historical fact that Jews, forbidden for centuries to own land in Europe, survived in the big cities, doing oddball, 'skuzzy' businesses that nobody else wanted to do  because they were low prestige or involved things that nobody would put their hands on. All of these businesses had the potential of making money or Jews wouldn't have done them.

Pawnshop keeping was the high-end profession, used clothing shops its country cousin. Used clothing vendors were called rag pickers. It wasn't a socially acceptable job but Jews didn't care as they weren't very socially acceptable anyway. Rag shops made money because a.) everybody having a hard time needed those shops to dress themselves. And b.) There were no Scott Paper Towels back then. Rags were a big-ticket item. A house was only as clean as its rag collection! And c.) one didn't need to rent a store to be a rag picker. It was done off pushcarts.Or today, ETSY, EBAY, CRAIGS LIST.

You wouldn't think that in this day and age I could find anyone who was actually in this noble, ancient trade but I did. I know a darling, bright man whose parents had done it, raised him in the biz, taught him the fine points (like Blue Jeans, antique Hawaiian Shirts called silkies,) so that his job prestige went sky high and even pretty girls chased after him and he befriended the tycoons of Beverly Hills.

His Rags to Riches Riff goes something like this: The start-up involved finding reliable sources for tons of old sheets and clothes. Traditionally, rag traders shmooze the top men at the SALVATION ARMY to get contracts for the SA cast offs, i.e. the less fine goods that the SA doesn't think it can sell in the store. The same can be done at strings of private thrift stores which discard 75% of what's given them as un-salable. The Goodwill has highly educated staffs/ managers so it's harder to bribe the store boss to give you all of their bulk rags. But those two are the main ones for getting bulk rags.

The only other source of old clothes is going door to door and has been for hundreds of years. Well, rien change plus c'est le meme, today's it's done much the same way only today one must fill out a "solicitation form," for the city, not for fund-raising but for going door to door for old clothes.

Next there is the implicit understanding a signed agreement with the city that one is doing the ragpicking for charity. The city application that one fills out asks to what org or to whom or for whom you'll be soliciting those rags and to whom you will be giving the mandatory 2%- 10% of your profits. It had to be a known charity. There are certainly a lot of those. If I did it, I'd pick PARA LOS NINOS, the latchkey daycares run in Skid Row. I like their work. Of course you could run the one to fund the other and start both businesses up. The latter one would attract heaps of cash donations and federal grant money as well.

Finding free labor (or nearly free) for the pick up is the next matter. My rag trade pal already ran rehab homes for the homeless, to rehabilitate addicts, a pastime, which gave him a sizeable, separate income. These houses were lucrative. The State paid him large amounts for the rehabbing. State pays about 5k a bed per month ya know. Had he not such an endless supply of men who were twiddling thumbs all day, he would probably have had no problem going to public parks and engaging homeless men and women to work for 8$ an hour doing flyer distribution and the later HOME pick up.

First the workers would give out flyers --FLYER READ : GIVE OLD CLOTHES TO CHARITY. TAKE IT OFF YOUR TAXES, CALL SUSAN for PICK UP. "We will be in your neighborhood next Tuesday morning, please bundle your old sheets, rags, old clothing to help the poor and leave them on your front porch.' These were usually upscale neighborhoods. They left the flyer with a very big plastic bag that had holes punched through it so that the children didn't suffocate inside the bag before Mom came home and found the bag. (City requires that).

He then would have the same homeless people go out in a truck the Tuesday after and pick up the full offering bags. It was like bringing home two tons of bags of money. Then, he'd bale them as tightly as possible so one could fit twice the amount of rags into a truck because the last phase was SELLING the RAGS to wholesale customers who bought tons at a time.

The contracts with military bases made the big money. They were the best customers for wiping rags; (sheets being the finest wiping rag available) but Pres. Carter closed all the bases so that left the Mexicans and Chinese, huge customers for cast off American duds. The world was in a blue jean madness then as now and old Levis were the cat's pajamas so the Mexicans, Chinese and Philippines were reliable clients for used clothing.

The surprise is that today, Ragpicking is a business that one can start with very little capital, where all your merchandise comes to you free, (what other business can say that?). The business can be useful for the community, employ the poorest people gainfully, give poor families a cheap way to dress themselves and all of it adds up to making the humble person who runs it filthy rich.

My friend has done ragpicking in all its many aspects and like his father, made millions. As no one suspects what a lucrative field ragpicking is, certain members of his family who did it also managed to escape taxation and sock the cash away in paid up land, beach front homes, apartment buildings, annuities like first mortgages, huge coin collections of silver coins, stacks of krugerands I mean hundreds, and the ole standby, tax free municipal bonds.Another acquaintance buys only cardigans from him, jewels and beads them and has a website to sell them and does ETSY and EBAY. CASH businesses.

Now all of them found there was enough money pouring in to give Uncle Sam his share. But I heard about a few other relatives of his who didn't, but hey, doesn't good laundering usually go hand in hand with rags?

Our POSTER is ANITA SANDS HERNANDEZ, Los Angeles Writer, Researcher, Mother of 4 and career Astrologer. Catch up with her websites  TRUTHS GOV WILL HIDE & NEVER TELL YOU, also The  FUTURE, WHAT'S COMIN' AT YA! FRUGAL LIFE STYLE TIPS,  HOW TO SURVIVE the COMING GREAT DEPRESSION, and Secrets of Nature, HOLISTIC, AFFORDABLE HEALING. Also ARTISANRY FOR EXPORT, EARN EUROS.. Anita is at astrology @earthlink.net ). Get a 35$ natal horoscope "my money/future life" reading now + copy horoscope as a Gif file graphic! No smarter, more accurate career reading out there!

<=== BACK TO  ANITA SANDS HERNANDEZ, the “HOW TO” QUEEN of the INTERNET

<==== BACK TO THE SHOW BUSINESS  ARCHIVE for writers, directors, producers, video documentary makers

<=== HOW TO TINKER WITH OTHER PEOPLE's BRAINS for big $. TANTRUM YOGA safe name for GESTALT AND PRIMAL

<=== BACK TO THE NEW AGE EMPOWERING INDEX

<===BACK TO MONEY MAKING IDEAS