From the Washington Post, April 1st, 2010. President Barack Obama chatted with reporters who followed him down Pennsylvania Avenue this morning as he and Rahm Emmanuel jogged to a Washington D.C. Hamburger emporium. While waiting for his order, he told the assembled journalists that he had a A QUICK "SIX STEP FIX FOR America. THIS ABSOLUTELY WILL WORK!" said the president before picking up a box of Big Macs and fries to take home to his family. 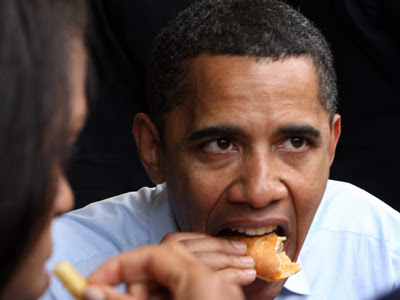 1.) STEP AWAY FROM THE BUILDING ALL CARDINALS, BISHOPS & the POPE - Everyone out of the Vatican and out of all the Catholic churches in the entire world. Enough is enough. The Inquisition, the endless genocide, the Crusades, Pope Pius XII backing Hitler (ostensibly as he was afraid of communism, the most spiritual concept, one which the Essenes lived by,) and now forcibly raped children across the world,  Ireland, Germany, America, Canada, Australia? OUT OF THE BUILDING! Fold your cassock put on regular garb and GIT your horny ass out of there! The Pope can stay and be tour guide and be the comical spectacle he deserves to be. ALL FUTURE REVENUEs from renting out cathedrals for light shows & concerts, churches and church basements for community organizations doing good, rebuilding society, -- all that 'gate' isn't yours. All future revnues money will fund the new PARTY RENTAL and MUSEUM tour business. And all your massive Vatican bank accounts will be frozen like a Pope's heart, the money used exactly as Jesus demanded when he said "sell your stuff and give the money to the poor and follow me. " The moola goes to creating jobs, businesses and will do it by doing lots and lots of microlending. P.S. All your rare scrolls, first editions and antique books will be auctioned off to oligarchs. You can keep a few Bibles for Vatican tours. The library will be open to tourists, a few of your antique first editions will be shown to tours in air-controlled rooms if we can find any employable Italians who will wear white gloves.

II.)  Step AWAY FROM THE BUILDING, GENTLEMEN OF CONGRESS. We will be giving S.A.T. tests to a new crew to locate public service minded Americans conversant with law and government. Those who test high 800 (which none of you could do,) will be trained by you for a week, then clean out your desks and beat it. Your fabulous pension for life disappears, you get any social security you paid in and that's it. The replacement squad earns 20$ an hour flat, time and a half for overtime.  THE DISAPPEARANCE Of elections, campaign donations, lobbyists will banish a cancer from the face of the planet..

III.) STEP AWAY FROM THE BUILDING, FANNIE MAE FREDDIE MAC OFFICERS. Privatizing the biggest mortgage lender in town was a baaaad idea. sorry. Our mistake. We find that we can hire bookkeepers who could do that work with one hand behind their back...no, that's what you did. With both hands on the books... no, that's what you did. Well, you know what I mean. DO THE WORK and do it right.

4.)  STEP AWAY FROM THE BUILDING DOCTORS! ALL HOSPITALS ar being NATIONALIZED. HEALING is not a 'for profit'  biz. We know you thought it was when you pulled those hefty student loans but tell ya what we're gonna do. Those debts get abrogated and if you want to earn a good salary, come back. Not a great salary but a good one.

5.) STEP OUT OF THE LABORATORY, FOR-PROFIT PHARM. All your patents and formulas and your R&D and your Billion buck earnings? It's over with. When the side effects of any pill are death, paralysis, cancer, heart disease and thoughts of suicide who freakin' needs that pill? We're turning your buildings into chemistry labs for student Naturopaths, herbologists who can use your machinery to make gentle meds with NO side effects.

6.) Step away from WALL STREET, so-called financiers. We don't need you. Give the bail-out bucks back. Collapse if you wanna. Not important to us in the least what you do. You were a bad idea from the git go. You had us suckered for a while there but the ride is over.

With that, the president took his burgers, jogged to a bullet proof Lincoln Continental, unwrapped his Happy Lunch as did Rahm Emmanuel, and they toodled back to the White House. We hunker down in the white House for a month;
this will all blow over. When the smoke clears,
we'll go for the Banks, IMF and the Fed, next.
Barry, get your hands off my freakin' fries!

<==  BACK TO ARMCHAIR ACTIVISM AS ENTERTAINMENT AND FUN!

<= BACK TO  "HOW THE ENRON SYNDROME  BECAME AN EPIDEMIC"
<==BACK TO THE FIX INDEX PAGE, A FEW DOZEN EASY FIXES YOU CAN LIVE WITH.