PROPAGANDA IS EVERYWHERE
UNDERSTAND THAT MIND CONTROL IS BEING DONE TO YOU.
YOU ARE BEING PROGRAMMED by THE RICH to be CONTROLLED,
STUPID, PASSIVE, MILDLY CONTENTED AND FULL OF MISPLACED  HOPE!

Business is Great. People are Terrific. Life is wonderful
Big Brother loves you. The State is a Good Daddy. You
need the State.When enemies come, who protects you?
WHO LOVES YOU BABY? THE STATE!!! And WHAT ELSE?
YOUR PENSION WILL BE GOOD WHEN YOU NEED IT!
Spend lots of money, eat lots of fatty food.


Remember in George Orwell's book 1984, Winston Smith and everybody in OCEANIA, the new London -- had to listen to GOV loudspeakers going full time saying "life is great, things are going to be A-OK, don't worry, and report any alienation in your friends. Sound like a  plan?"
http://www.imdb.com/title/tt0087803/quotes

That is only the slightest exaggeration of the kind of propaganda we all inhale daily thru the media. The kind that keeps you going and gives you hope so you don't revolt against the state. HOPE, the last evil fairy in Pandora's BOX.

The Father of (HOPE) and Spin: Edward L. Bernays & The Birth of PR

The conscious and intelligent manipulation of the organized habits and opinions of the masses is an important element in democratic society," Bernays argued. "Those who manipulate this unseen mechanism of society constitute an invisible government which is the true ruling power of our country.       http://groups.google.com/group/newslog/t/787ea1630f37026d?hl=en

BEST BOOK on this by NOAM CHOMSKY uses the phrase, MANUFACTURED CONSENT meaning they crank out your AGREEING with them. They know which switches and buttons to push.

Jacques Ellul  is a big name in the STUDY of  Propaganda and The Formation of Men?s Attitudes his book where he says "The uncultured man cannot be reached by propaganda. Experience and research done by the Germans between 1933 and 1938 showed that in remote areas, where people hardly knew how to read, propaganda had no effect.      http://groups.google.com/group/newslog/t/15ce5620b4456c96?hl=en

Adolf Hitler and the Nazis were working on a Big Brother-style cable
television propaganda industry to be broadcast across Germany.

Plans for the system were first found when Soviet soldiers entered Berlin
but have recently been reexamined by researchers for a new Russian
documentary.

The Orwellian screens would have been set up in public places and would show
“people’s television”, depicting how the Aryan race should live, with the
Nazis focusing on news, sport and education.

Ideas included building rooms beside laundries so women could gather round
the TV to watch the broadcasts.

Prototype programmes included Family Chronicles: An Evening with Hans and
Gelli, which was an early reality TV show depicting a wholesome Aryan life
of a young German couple.

Engineer Walter Burch was asked to make the idea a reality, and tabled a
document to Hitler called “Plan to supply people’s transmitter to German
homes” which would result in the laying of a broadband cable between Berlin
and Nuremberg. Other plans included showing footage of executions of Nazi traitors.
Germans would have LLLLLLOOOOOOOVVVVVVVVED IT!

We have full time TV and it's cranking a lot of stuff your way that is turning your brain to silly putty.
Be aware. Turn it in to ...well, not to Winston smith's THOUGHT POLICE, but to writers, researchers on the internet. Say 'THIS AD, this NEWSCAST this NEWS ANCHOR seems suspicious to me, what do you think?"

Go to the best sites and get the head writer's email addie and put it on your list. We all need a list of BRAINOIDS. So we see a story, we fill in our email, BRAIN and zingo, in go 100 addies. Fer instance there is a P.R CAMPAIGN going right now that says 'NO GLOBAL WARMING GOING ON! FERGETABOUT IT!" And another one saying IF THERE WERE, and we forgot, what a disaster! So let's err on the side of BEING GREEN, and pure, and clean, no? Many allege there is some serious cui bonum behind the propaganda, that rich people can manipulate 'low carbon taxes' get bribes, all kinds of things. Read:
TRUTH ABOUT THE CLIMATE WARS.

THIS JUST IN: There are all kinds of lies. The PR campaign for CLIMATE is one thing, Outright lying Propaganda is ANOTHER thing but SPIN is the third version. You want to talk about political spin..... this has got to be the best!!    VERY FUNNY and quite real.

Judy Wallman, a professional  genealogy researcher in southern   California , was doing some personal  work
on her own family tree. She discovered that Congressman Harry Reid's  great-great uncle, Remus Reid, was
hanged for horse stealing and train  robbery in   Montana in 1889. Both Judy and Harry  Reid share this
common ancestor.

The only known photograph of Remus  shows him standing on the gallows  in   Montana territory: 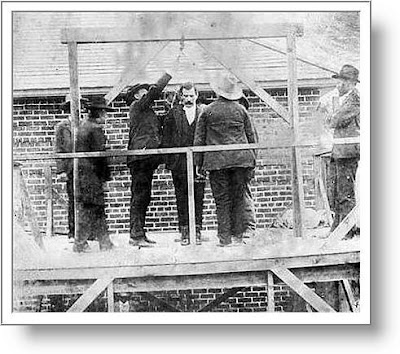 On  the  back of the picture Judy obtained during her research is this inscription:  'Remus Reid, horse thief, sent to Montana Territorial Prison 1885, escaped  1887, robbed the Montana Flyer six times. Caught by Pinkerton detectives,  convicted and hanged in 1889.' So Judy recently e-mailed  Congressman Harry Reid for information about their great-great uncle.Harry Reid:  Believe it or not, Harry Reid's staff sent back the  following biographical sketch for her genealogy research:  "Remus Reid was a famous  cowboy in the   Montana   Territory . His business empire grew  to include  acquisition of valuable equestrian assets and intimate dealings  with the   Montana railroad. Beginning in 1883,  he  devoted several years of his life to government service, finally taking  leave to resume his dealings with the  railroad. In 1887, he was a key  player in a vital investigation run by the renowned Pinkerton Detective  Agency. In 1889, Remus passed away during an important civic function held  in his honor when the platform  upon which he was standing  collapsed."

THAT's how it's done, folks!   That's real POLITICAL SPIN. Whether you're rigging an ad campaign, writing up a P.R release. for your business, MERCHANDISING A PRODUCT rigging a PERSONA for somebody who hasn't GOT ONE, use this size chutzpah, spread it thick and lay it out for the bozos to read and believe. But if you're going to do that, don't be surprised if the Government does it back to you. What we are and what we do, we ATTRACT.

PROPAGANDISTS have honed the tricks which make the CITIZENRY AGREE with what's good for the OLIGARCHS !

Cambridge Analytica is a CIA HIREE GROUP over in UK, which won Donald Trump the US election and powered the Brit Brexit campaign.  Eye-opening stuff.

Fraudulent song of the mockingbird
can fake any sound in bird-dom .
Rippling along, attracting with flirt
like a regular Edmund PURDOM.     (handsome matinee idol of the 50s)

Our POSTER is ANITA SANDS HERNANDEZ, Los Angeles Writer, Mother of 4 and Career Astrologer. Catch up with her websites  TRUTHS GOV WILL HIDE & NEVER TELL YOU, also The  FUTURE, WHAT'S COMIN' AT YA! FRUGAL LIFE STYLE TIPS,  HOW TO SURVIVE the COMING GREAT DEPRESSION, and Secrets of Nature, HOLISTIC, AFFORDABLE HEALING. Also ARTISANRY FOR EXPORT, EARN EUROS....* Anita is at astrology@earthlink.net ). Get a 35$ natal horoscope "my money/future life" reading now + copy horoscope as a Gif file graphic! No smarter, more accurate career reading out there!

<== BACK TO THE  SNOOKERED INDEX PAGE, HOW THEY DID IT, WHAT U NOW WILL NOT ALLOW

<===BACK TO THE REALITY 101 SEMINAR FOR CASH-SEEKING TEENS

<====HOW TO TINKER WITH OTHER PEOPLE's BRAINS for 100$ the hr, Call it TANTRUM YOGA and it's legal

<=== MEET ANITA SANDS HERNANDEZ  WHO WRITES ALL THESE ARTICLES

<==== BACK TO THE CONSPIRACY SECRETS PAGE "JERRY'S REFRIGERATOR"

<===BACK TO MAIN PAGE, THINGS U DID NOT KNOW ABOUT DEEP STATE PROPAGANDA MACHINE

<=== BACK TO THE ACTIVISTS' WEBSITE. EASY BREEZY TUTORIAL on HOW TO GET OUR COUNTRY BACK

<===BACK TO THE CONSPIRACY INDEX, "JERRY'S REFRIGERATOR" and the Tin Foil Hat Collection of theories.