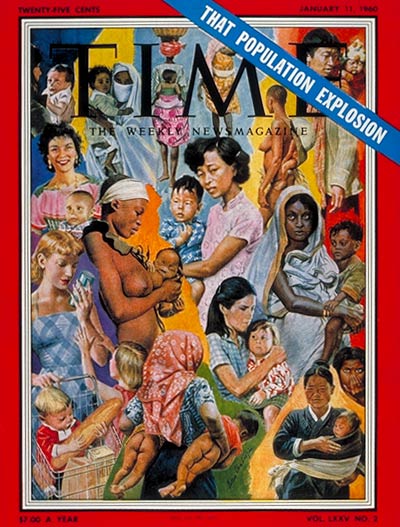 From Wikipedia, the free encyclopedia. http://en.wikipedia.org/wiki/Malthusian_catastrophe
With many live links in it. This (BELOW) is just the text.

A Malthusian catastrophe, sometimes known as a Malthusian check, is a return to subsistence-level conditions as a result of agricultural (or, in later formulations, economic) production being eventually outstripped by growth in population. (i.e.e EEEK too many PEOPLE here! That way, ordinary men are alienated, hateful, mistrusting, competitive, kept off balance by a sense of crowding, impending disaster.)

Theories of Malthusian catastrophe are very similar to the subsistence theory of wages. (i.e. "sorry fellow, so many people here, everyone wants your job, you're lucky you even have one.) The main difference in these worrying headtrips is... that the Malthusian theories predict over several generations or centuries whereas the subsistence theory of wages (which the rich guys certainly make public)  predicts over years and decades.

(Poster's note: Tommy Malthus was seriously in the employ of the oligarchs of UK, in that distant time of the first big taders and merchants. He was their THINK TANK. Their success was predicated on workers being fearful, submissive, grateful for 'nose above water' if only by centimeters. Slave wages and CORN laws, the Enclosures where rich seized common meadows & threw farmers off the land..etc, and the constant census or SOUL count for taxing purposes all insured that. Any philosophy that said that many of them might starve and die--- terrorized peasants, & THAT worked for the manufacturers and land owners. It kept you fearful and cowed, even grateful.

In 1761, Robert Wallace published Various Prospects of Mankind in which he argued that progress would eventually undo itself by overstocking the world with people. Thirty-seven years later, Thomas Malthus published his now famous Essay on the Principle of Population. In it, he predicted that population growth would eventually outrun food supply. This prediction was based on the idea that population, if unchecked, increases at a geometric rate, whereas the food supply could only grow at an arithmetic rate. Mathematically, any increasing geometric sequence (e.g. 1, 3, 9, 27, 81) will eventually overtake all arithmetic sequences (e.g. 10, 20, 30, 40, 50). The resulting decrease in food per person will eventually lead to subsistence-level conditions. According to Malthus, the catastrophe can only be prevented by self-restraint or vice—which for him included contraception and abortion.

Malthus did not give a time frame for his catastrophe. Thus far, population growth has been essentially geometric as Malthus predicted. The Malthusian catastrophe, however, has not occurred, principally because food supply growth has also been roughly geometric, not arithmetic. Furthermore, the widespread use of contraception and abortion (Malthusian vices) have, as Malthus said they could, restrained population growth significantly. In fact currently food supply per person is several times higher than when Malthus wrote his essay.

Neo-Malthusian theory argues that unless at or below subsistence level, a population's fertility will tend to move upwards. Assume for example that a country has 10 breeding groups. Over time this country's fertility will approach that of its fastest growing group in the same way that will eventually come to resemble, (GRPHICS LOST) regardless of how large the constant a is or how small the constant b is. Under subsistence conditions the fastest growing group is likely to be that group progressing most rapidly in agricultural technology. However, in above-subsistence conditions the fastest growing group is likely to be the one with the highest fertility. Therefore the fertility of the country will approach that of its most fertile group. This, however, is only part of the problem.

In any group some individuals will be more pro-fertility in their beliefs and practices than others. According to neo-Malthusian theory, these pro-fertility individuals will not only have more children, but also pass their pro-fertility on to their children, meaning a constant selection for pro-fertility similar to the constant evolutionary selection for beneficial genes (except much faster because of greater diversity). According to neo-Malthusians, this increase in fertility will lead to hyperexponential population growth that will eventually outstrip growth in economic production. Neo-Malthusians argue that although adult immigrants (who, at the very least, arrive with human capital) contribute to economic production, there is little or no increase in economic production from increased natural growth and fertility. Neo-Malthusians argue that hyperexponential population growth has begun or will begin soon in developed countries.
Non-occurrence of the catastrophe

At the time Malthus wrote, most societies had populations at or near their agricultural limits. But by the late 20th century, the new agricultural technologies of the green revolution had greatly expanded agricultural production throughout the world, and what famines still occurred were largely caused by war or political unrest rather than crop failure.

In addition, most technologically developed countries had by this time passed through the demographic transition, a complex social development in which total fertility rates drop drastically in response to lower infant mortality, more education of women, increased urbanization, and a wider availability of contraception. By the end of the 20th century, these countries could avoid population declines only by permitting large-scale immigration. On the assumption that the demographic transition would spread to less developed countries, the United Nations Population Division estimated that human population would peak in the late 21st century rather than continue to grow until it exhausted available resources.

Another problem is that there is no strong evidence that the human population—nor any real population—actually follows exponential growth. In plant or animal populations that are claimed to show exponential growth, closer examination invariably shows that the supposedly exponential curve is actually the lower limb of a logistic curve, or a section of a Lotka-Volterra cycle. Also, examination of records of estimated total world human population ([1] (http://www.geohive.com/global/linkg.php?xml=hist2&xsl=hist2) [2] (http://www.geohive.com/global/linkg.php?xml=hist3&xsl=hist3)) shows at best very weak evidence of exponential growth: GRAPHIC LOST.

Clearly this is close to linear. In fact, the correlation coefficient is practically the same for linear growth, or very slow exponential growth (with a characteristic time of about 60 years).

The annual increase graph is worse; for exponential growth, it should itself be an upward trending exponential curve whereas it has actually been trending downward since 1986. Also the rate of increase should increase, whereas, of the increase between the early 1950s and today, five-sixths occurred in the 1950s and the first half of the 1960s (presumably attributable to the Green revolution); it then rose to a peak in 1989 and has since declined to levels approaching those of 1970. GRAPHIC LOST:

Though short-term trends, even on the scale of decades or centuries, do not necessarily disprove the underlying mechanisms promoting a Malthusian catastrophe over longer periods, the relative prosperity of the human population at the beginning of the 21st century, and the apparent failure of spectacular predictions of mass starvation or ecological collapse made by activists such as Paul R. Ehrlich in the 1960s and 1970s, has led many people, such as economist Julian Simon, to question its inevitability.

·       Cannibals and Kings by Marvin Harris

·       Beyond the Limits by Donella Meadows


·       Malthus' Essay on the Principle of Population (http://www.ac.wwu.edu/~stephan/malthus/malthus.0.html)

let me know if the cutpaste of these urls works, and/ or which is dead.


ABOVE situation may give some leaders the idea to KILL EVERY BODY BEYOND A HALF BILLION. HOW? *The rumor is "THEY"  sent AIDS into AFRICA in Small Pox injections, deliberately -- they being the 13 families.  SEE:  AIDS CONSPIRACY. and AIDS CREATED

Our POSTER is ANITA SANDS HERNANDEZ, Los Angeles Writer, Researcher, Mother of 4 and career Astrologer. Catch up with her websites  TRUTHS GOV WILL HIDE & NEVER TELL YOU, also The  FUTURE, WHAT'S COMIN' AT YA! & HOW TO SURVIVE the COMING GREAT DEPRESSION, and Secrets of Nature, HOLISTIC, AFFORDABLE HEALING. Also HOW TO LIVE on A NICKLE, The FRUGAL PAGE.* Anita is at astrology@earthlink.net ). Get a 35$ natal horoscope "my money/future life" reading now + copy horoscope as a Gif file graphic!

<===BACK TO THE FUTURE INDEX

<=== PORTAL to 7,000 FREE CLASSROOMS, REPUBLISH ANY OR ALL ALSO 4 FREE, ATTRACT AD REVENUE