MURDER AT THE TABLE
HOLISTIC STYLE

Find out your husband is a bum? A liar? A rat? A two timer? Did he abuse you or the kids? Does he hand all his money to some tramp he met in a bar? How can you revenge yourself? Time for DIVORCE "FORENSIC FILES" STYLE!

LIVING WELL (and LONG, so LONG that he's no longer AROUND) is the best revenge. Any intelligent woman with a ratso for a mate should simply replace him with NOTHING. With AIR.

Now, divorce would be the kinder method but sometimes you just can't divorce him as a.) he'll be miserable, b.) he'll kill you, steal the kids, take the house, claim he has no earnings, leave you high and dry without a car... c) he'll marry the slut he's F'in and your kids will have to call her MOM.

So do the compassionate thing. Julia Child him to death. That's right, bite the bullet. You have to strike first! Replace his sweaty, moldy, angry, cheap, cheatin', smelly  body WITH plain old AIR.

HOW? That's EASY! FEED HIM BEEF, PORK, BUTTER, CAKE, EGGS, SUGAR and guaranteed, soon there's gonna be nothing in your house except AIR. Clean air. No more foul, husband-y smell. The guy will croak and he's gonna DIE SMILING! It's put his recliner on Craigs List time! 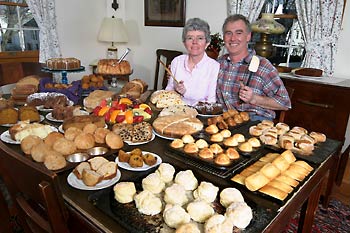 This isn't murder. It's helping an old man to the exit. It's giving him a serious afterthought in the astral that maybe, just maybe, pigging out is not the thing to do next lifetime around. And oh yes, he'll get himself a new body as re-incarnation is a scientifically proven reality, (SEE THIS FILE proving FIRST HAND IT DOES.) The important thing is that before he gets this new body, he will meditate on what a lousy hubby he was and how you fed him so kindly and cooked for him and slaved for him and how he should be nice to his next wife, next lifetime.

So feed the louse to death --only-- when you do this, you have to make certain of two things. A.) That you are married at least 9 1/2 years as you only get his pension at the TEN YEAR POINT and not a day earlier. and B.) That YOU don't eat a bite of his rich diet.

In fact, you ought to already be a sworn, card-carrying VEGETARIAN cuz you're going to have to watch him slurp gravy on top of greasy meat and maintain your cool. You have to be solid enough to endure MURDER at 3 MEALS A DAY. And you have to know how to COOK! You're going to have to serve pecan pie with whipped cream a costly recipe. And you're going to have to know how to DIET and not have more than one ounce of it, (and never combining it with protein meals, it must be eaten solo as sugar does not combine wi. protein).  You're going to have to nibble your watercress salad with tofu burgers like a happy rabbit and rejuvenate your own face and body in the eating of same and LIVE to be a skinny, firm 200 years of age and peppy as MAW MAW on RAISING HOPE and attract a fabulous second and third husband. And that takes looks. Skinny Minny. Muscles from working out.

Because let's face it, you're NOT YOUNG. You can't exactly DO anything illegal with your soft, old body today, in the condition it's in. Face it. Men have seen MICHELLE PFEIFFER. They don't want you! So tofu, cress and GYM CLASS for YOU, gal.

LIVING to 120 years of age, and looking sixty at that advanced age is the very same as losing a mate now. If you live to 120. See, 120 yrs old becomes like 70 is now. So if he checks out at say, your 60th year, it's as if you were 12 when you were widowed. Get the logic? If he checks out when you're 75, it's as if you were l8 when you were widowed and l8 is doable if most of your life after he's gone is going to be spent happily alone and rich or with nice people, doing activism groups and meeting socially conscious men, brains in the upper 3% of humanity... and then traveling the world doing import/export with starving third world villages. Fun stuff.

So get started now. BASTE this rooster with fat as it's the single most lethal food group. Second worst is sugar. So cook up gravy, potatoes, meat, fudge cake --- and serve them all in the same meal. SOME people are very resistant, and some aren't and some succumb fast and some don't But not a drop of olive oil, arugula or tomatoes for ole fat lip Dirty Harry. Give him ice cream and fudge, lots of chocolate FUDGE, and rich chocolate nut pie and abstain, yourself.

I couldn't do it. Not because I don't believe in killing a louse. I do. But I'm one of those persons who has to eat everything I cook, kind of waste not, want not, I'll just stick it here in my mouth.. I'm a good cook. I have to keep my hands tied behind my back in the kitchen. I can make anything! Eclairs, cream puffs, homemade pasta. pies, southern fried chicken, meatloaf......

If I had a nasty husband, I'd love to cook lethal hams for him, basted in pineapple juice, create thick sauces for his marbled beef sirloin. It would be the happiest of art forms. Problem is, I'd love to EAT the ham and beef with him. Don't know how you could cook a pecan pie for him and not eat half. You're home all day with the leftovers, too. He's not. Could be dangerous. See, this is the path for a master. Only a female master can practice mate-i-cide.

Just thinking about it made me write an Ogden Nash type POME about it:

HAZEL THE UNHAPPY WIFE,
TO BE MARRIED TO WOODIE WAS STRIFE,
SHE COOKED HAM AND PUDDING,
FED IT TO WOODIE
AND ONE DAY HE FELL ON HIS KNIFE!

So you see the concept, if AIR  would be better than him, if he has no reason for living, if he's mean to the kids, if he gives all his freetime and money to the mistress, give the bastard a golden funeral, one that takes long, paroxysmically delightful, tasty two years to engineer. And the good thing is, you've got two years to lose the extra weight, fix all your health problems, GET YOUNG, get firm, ready for that next husband, so the timing is perfect!
PS. If you're serious, see: http://absolutewrite.com/forums/archive/index.php/t-190732.html

If you visit that page, be sure to erase it from your websurfing history!

Got a roomie
you'd like to chill?
Don't have to feed him
a lethal pill!
eggs and bacon
every morn
blackest coffee
does big harm
ham sandwich for
his midday lunch
pair of twinkies
with orange crunch
dinner basic,
meat and spuds
fry 'em both
serve tank of suds
chocolate cake
for his pancreas--
that should cream
his insured ass!