TIME TO LEARN TO GROW YOUR OWN MEAT, GET OVER THAT KILLING THING
by William Salaten from Washington Post 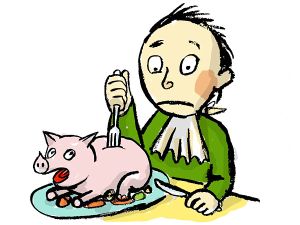 Get a Grip, Dad. You have to KILL me then bake me first!
You don't want to do that to your little friend Waddles, do you?

Where were you when race horse Barbaro broke his leg? I was at a
steakhouse, watching the race on a big screen. I saw a horse pulling up,
a jockey clutching him, a woman weeping. Thus began a worldwide vigil
over the fate of the great horse. Would he be euthanized? Could doctors
save him? In the restaurant, people watched and wondered. Then we went
back to eating our steaks.

Shrinks call this "cognitive dissonance." You munch a strip of bacon
then pet your dog. You wince at the sight of a crippled horse but
continue chewing your burger. Three weeks ago, I took my kids to a sheep
and wool festival. They petted lambs; I nibbled a lamb sausage. That's
the thing about humans: We're half-evolved beasts. We love animals, but
we love meat, too. We don't want to have to choose. And maybe we don't
have to. Maybe, thanks to biotechnology, we can now grow meat instead of
butchering it.

With all the problems facing humanity -- war, terrorism, poverty,
tyranny. you probably don't worry much about whether it's right or wrong
to eat meat. That's understandable. Every society lives with two kinds
of moral problems: the ones it's ready to face, and the ones that will
become clear or compelling only in retrospect. Human sacrifice, slavery,
the subjugation of women -- every tradition seems normal and
indispensable until we're ready, morally and economically, to move
beyond it.

The case for eating meat is like the case for other traditions: It's
natural, it's necessary, and there's nothing wrong with it. But
sometimes, we're mistaken. We used to think we were the only creatures
that could manipulate grammar, make sophisticated plans, or recognize
names out of context. In the past month, we've discovered the same
skills in birds and dolphins. In recent years, we've learned that crows
fashion leaves and metal into tools. Pigeons deceive each other. Rats
run mazes in their dreams. Dolphins teach their young to use sponges as
protection. Chimps can pick locks. Parrots can work with numbers. Dogs
can learn words from context. We thought animals weren't smart enough to
deserve protection. It turns out we weren't smart enough to realize they
do.

Is meat-eating necessary? It was, back when our ancestors had no idea
where their next meal might come from. Meat kept us alive and made us
stronger. Many scientists think it played a crucial role in the
development of the human brain. Now it's time to return the favor.
Thousands of years ago, the human brain invented agriculture, and
hunting lost its urgency. In the past two centuries, we've identified
the nutrients in various kinds of meat, and we've learned how to get
them instead from soy, nuts, and other vegetable sources. Meat has made
us smart enough to figure out how we can live without it.

So, why do we keep eating it? Because it's so darned tasty. Don't give
me that hippie shtick about how McDonald's or Western society foisted
beef on us. McDonald's didn't invent the appendix. McDonald's didn't
invent all the genes we've acquired at least eight, according to a 2004
article in the Quarterly Review of Biologythat help us, but not chimps,
manage a meat diet. Look at the fossil evidence recently published in
Nature. About 5,000 years ago, when people in Britain figured out how to
domesticate cattle, sheep, and pigs, they promptly switched from
fish-eating to meat-eating. A similar revolution swept North America
about 700 years ago. My daughter has been demanding meat ever since she
tasted it in baby food. I've seen vegetarian friends lust at the thought
of a burger. We're carnivores. We evolved that way.

If we were just beasts, that would end the discussion. But we're not.
Evolution didn't stop with our lusts; it started there. Food gave us
brain power. Technology lifted us above survival and gave us time to
think. We began to understand the operation of living things, even
ourselves. We saw what we were, and we saw what we could be. That's the
paradox of humanity: Our aspirations transcend our nature, but they have
to respect it. To become what we must become, we have to work with what
we are.

Anyone familiar with Alcoholics Anonymous understands this duality. It's
the heart of the Serenity Prayer: "God grant me the serenity to accept
the things I cannot change, courage to change the things I can, and
wisdom to know the difference." Many alcoholics take this to mean that
addiction can't be changed, but behavior can, with God's help. But
prayers often mean more than we understand. In the case of meat, maybe
we don't have to go cold no-turkey. Maybe what we're asking for, what
God is giving us, is the wisdom to see that we can't change our craving
for meat, but we can change the way we satisfy it.

How? By growing meat in labs, the way we grow tissue from stem cells.
That's the great thing about cells: They're programmed to multiply. You
just have to figure out what chemical and structural environment they
need to do their thing. Researchers in Holland and the United States are
working on the problem. They've grown and sauteed fish that smelled like
dinner, though FDA rules didn't allow them to taste it. Now they're
working on pork. The short-term goal is sausage, ground beef, and
chicken nuggets. Steaks will be more difficult. Three Dutch universities
and a nonprofit consortium called New Harvest are involved. They need
money. A fraction of what we spend on cattle subsidies would help.

Growing meat like this will be good for us in lots of ways. We'll be
able to make beef with no fat, or with good fat transplanted from fish.
We'll avoid bird flu, mad-cow disease, and salmonella. We'll scale back
the land consumption and pollution involved in cattle farming. But 300
years from now, when our descendants look back at slaughterhouses the
way we look back at slavery, they won't remember the benefits to us, any
more than they'll remember our dried-up tears for a horse. They'll want
to know whether we saw the moral calling of our age. If we do, it's time
to pony up.