THE SUBTLE POWER OF WOMEN 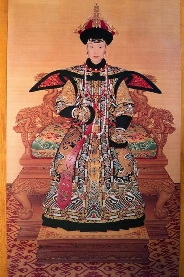 THE EMPRESS FILE!
Is there someones BOOT on your neck? Mothers, women, wives and female employees of bosses --are frequently subjugated by their men (or by our children!) When the relationship with them started, we gave them the reins, so its our own fault. Were all co-dependent enablers who need to learn a lexicon of modalities to deal with rudeness, without arousing irritation.The Iron fist in the velvet glove.

This entire world salutes the powerful man. A man barks, snarls, growls, chides, demands or pounds his fist and instantly, he scares us into respect and submission. Youd think folks would welcome the womans much gentler approach, but they dont. While folks cower in fear when a man chides, when a woman goes into a power mode, she arouses their ire. She then bucks a tide of irritation that probably was left over from when a man worked them over. Even people under her, i.e. employees, servants, children, wont take it from a woman and will talk back or call her the B-word.

So down thru time, women have learned tricks to deal with bad behavior and rudeness, tricks just as good as a barking voice or punch in the nose. The main four are:

1.) THE JEWISH GUILT TRIP. This is time honored in some parts of the world because it works so well. When something horrid has happened and you want to correct the person who did it to you and see it never happens twice, do the GUILT TRIP! THE GT is done with tears or words or better yet, both. Imagine tears on top of a verbal painted picture of what your experience was like all delivered with eye wiping. "Sweetheart, I cooked dinner for an hour, I made the Kreplach just the way you like, you came home and ate it in the t.v. room in the dark."

Or, You didnt come home until the kreplach was ice cold and too rubbery to reheat. I did all that work for you and it was wasted. Or and you came home sloshed having eaten at the local Chinese café with the boys and you didnt bring me a doggie bag. I have to eat cold, rubbery kreplach. (I do not know what kreplach is but to give you a view of the Jewish Guilt trip I thought Id be authentic.)

If such a flow of woe is delivered as pain and tears and not a bit of rage or claims of entitlement, you can say anything, ask for anything. Like that he run right out NOW and get you some mushi pork and sweet and sour shrimp. Boy that boor will never fail to get a doggie bag again!

2.) Kill em with kindness. Not kill but disarm. Any potential trouble source person, (called a P.T.S) any petty tyrant, gets praised, flattered, lubricated with perfumed oil until they start to consider you a very wise fun person to know. This is something you dont do to normal people (as theyd feel targeted with something weird and slippery) but Neurotics crave it, need it, do a turnaround when they get it. SO LUBRICATE AWAY! TO my landlord, Id say, its so great how you can fix any hole in the wall with that paste, grout the tub with that paste, youre so good at micky-mousing. Your wife must love how handy you are, but the way you pruned my 50$ mulberry tree when I told you not to, it will never give fruit again so I must take that $50 off the rent.

3.) Water their flowers, dont bother with their weeds. The flowers will one day shade the weeds, drive the weeds out of business. Find ten things to flatter them on, during the course of a few days, doing it subtly. The eleventh will be the knife through the heart but the real growth accelerating pay off --- if they can handle that one negative. And when you mention it, you always start with the huge, miraculous payoff they will get for handling this one, little weed.

4.) Mention the karma. Get them in an absorptive listening mood. Best is when theyre getting a massage or eating great food. They are rooted to the chair, relaxed. Your kind, soft, droning voice hypnotizes them into listening because what youre feeding them off the plate is so delicious and your sweet voice sounds so positive. You are affirmative in tone, in word choices so you become suggestive. What you are suggesting they want to do, for their own good is to change their bad karma. Yes, if you suggest to them that what they have done is endangering them, their future, their hypnotized mind will immediately see the logic of your argument and embrace it. And they will unconsciously go on a mission to absolutely stop what you suggested was happening from happening.

I did this with my most hateful enemy and it worked. My 90 year old neighbor hated me, and told me openly You are disgusting. You rent that shack, next door, I own this palace. That is a big difference." She was contemptuous of me, my childrens cars in the driveway, my Indonesian jungle of fruiting trees (so thick that the house cannot be seen from street,) and edible salads instead of a manicured front lawn.

She was also getting my cats on her roof and fences and she reported me to the pound for excess cats. I got a letter from the pound. GET RID OF YOUR CATS.I knew the pound has no right to come into your home, in spite of what they allege as they pound on your door. So I handled it. No more feline freak nights with toms roaming. All cats were confined to quarters at sundown. A week later, I quietly said to my vicious neighbor. "I stopped feeding all the feral cats. So the traffic is down. But the pound is now coming after my own cats who are like my children. If the pound gasses them, its as if the POUND AND YOU were killing my babies. When you kill my babies, the karma is that the same thing happens to you with your children." I said it in a quiet, pained voice as if I were looking out for her welfare as she has two grown children. She immediately called off the pound. I never heard from them again.

Now, that was a woman offender, even though age 90, she was somewhat sensitive and impressionable. She was not a man. But a KARMA READING works just as well for a man, oddly enough. Charlie, I happen to know that you are cheating on your wife, Ethyl, my best friend. Guess what the karma is for that. In your next life, youll be a woman with many children married to a lying, disease-seeking man. If he gives you a blank stare, add: thats just your next life. In this one youll bring home so much non specific bacteria that your prostate will be reamed. We call that cancer. But heres the final chapter. Just as youre getting your radiation treatments, Ethyl will find out you were cheating on her all these years, shell leave you and you will go through chemo alone. All of this is said with sympathetic hand patting.

See? Velvet gloves to the max. Nobody can call you the B word ever again!


<===BACK TO THE COMPLETE WRITINGS OF ANITA SANDS HERNANDEZ

<===BACK TO THE LUCK IN LOVE BOOK, or HOW TO MARRY WELL