Making the Negev Desert bloom once seemed like a good idea, but it's killing ISRAEL 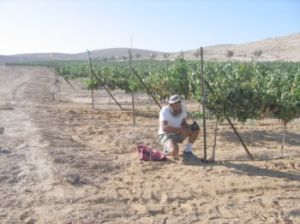 Your California Vintners don't KNOW what dry soil is!

It's a good thing ISRAEL rules  Washington DC Because this desert nation is DRYING OUT! (see above pic) They are using RECLAIMED WATER and cannot grow enough food for their population. The Jews will get  behind Al Gore urging quick action on Global Warming

Few notions are more deeply rooted in Zionism's founding mythology than the exhortation to "make the desert bloom." The earliest Zionist pioneers arrived in Palestine with a strong faith in science and technology, shaped by the Jewish enlightenment that began in the late 18th century. They also brought an earthy sense of self-reliance that made growing their own food—even in the bleak Negev Desert—a high priority. Amid the ashes of the Holocaust, that determination only deepened. "For those who make the desert bloom there is room for hundreds, thousands, and even millions," Israel's first prime minister, David Ben-Gurion, wrote in 1954, when he moved to the Negev himself. As Israeli society grew increasingly devout in the 1970s, the prophet Isaiah provided further inspiration: "The wilderness and the parched land shall be glad; and the desert shall rejoice, and blossom as the rose."

At first glance, today the parched land indeed looks glad. The arid coastal plain sprouts with fields of watermelons, tomatoes and sunflowers, and Israel has earned a reputation for creative use of sparse water supplies. In the late 1950s and early 1960s, Israelis pioneered the use of "drip irrigation"—which delivers water directly to a plant's roots. More recently, Israeli experiments with desalination and water recycling have drawn attention around the world. The Yale/ Columbia Environmental Performance Index ranks Israel 49th overall and best among desert nations, in part for managing the stress irrigation puts on water supplies. Still, some scientists worry about the environmental cost of building an economy in the desert. Israel consumes 1.8 billion cubic meters of water each year; 15 years from now, it will need an additional 1.5 billion cubic meters to meet demand rising due to population and economic growth, according to Israeli water experts. About half of Israel's clean water is used for agriculture, yet farming accounts for only 2 percent of Israel's GNP. Considering those numbers, some environmentalists are beginning to question whether agricultural growth in a desert climate like Israel's is really sustainable. The question, says David Brooks, a Canadian water expert and environmentalist, "is not whether water is used efficiently in Israeli agriculture, but whether agriculture is an efficient way to use water in Israel."

Water has long been a deeply political issue in the Levant; wars are waged over it. Aquifers and other sources of water tend to straddle political boundaries. Levi Eshkol, Israel's prime minister during the Six Day War, was a water-company executive who spent long hours poring over maps of potential sources. According to "The Iron Wall," a history by Avi Shlaim, Eshkol believed that "without control over the sources of water the Zionist dream could not be realized." In 1964 Israel completed the National Water Carrier, designed to pipe drinking water from the Sea of Galilee, in Israel's north, to the Negev in the south. Syria and other Arab states then moved to divert the headwaters of the Jordan, igniting fierce clashes that included Syrian-sponsored Palestinian guerrilla attacks. The water wars were one of the key factors in the establishment of the PLO in 1964.

Diverting water from the Galilee has contributed to another devastating environmental consequence: the drying of the Dead Sea. Much of the water that once made its way down the Jordan River is no longer available to replenish the body of water downstream. Before 1964, the Dead Sea used to receive 1.3 billion cubic meters of water each year, according to Eilon Adar, who heads the Water Research Institute at Ben-Gurion University. Now "at most it gets 200 million cubic meters a year." Since the inauguration of the National Water Carrier, the sea level has fallen by 21 meters, and continues to drop at a rate of roughly one meter each year. "The Dead Sea is dying," says Adar. "There's an environmental toll here, and we're really worried." There's also an economic toll: the dangerous sinkholes developing under the Dead Sea have badly hurt the region's tourism industry, according to Adar.

Israel's romantic notions of making the desert bloom have encouraged heavy government subsidies for farming. Israeli farmers pay roughly 40 percent as much for their water as those who use it for nonagricultural purposes, says Hillel Shuval, a water expert at Jerusalem's Hadassah Academic College. The subsidies help Israeli farmers export much of their produce, which makes little environmental sense in an arid country. Exporting one kilogram of wheat is equivalent to exporting 1,000 liters of water, which means Israel in effect exports 100 million cubic meters of water each year, about as much as its desalination plants produce. Two years ago Israel inaugurated a massive desalination plant in the coastal city of Ashkelon, but desalination is costly and energy intensive; each cubic meter of clean water costs roughly 60 cents to produce, according to Adar. "Subsidizing water for agriculture results in irrational use, in growing crops which otherwise wouldn't be economically feasible," says Hillel.

The Negev is the laboratory for new technologies which Israelis hope may solve their water troubles. Some of the most ambitious recycling experiments are found there, just minutes from the cabin where Ben-Gurion retired to the desert. In a sun-bleached sandlot surrounded by date palms and desert scrub, 41-year-old Amit Ziv explains how his kibbutz pumps 500,000 cubic meters of warm, brackish water each year from an aquifer 800 meters below ground. The water is first cycled several times through man-made ponds for growing fish including sea bass, tilapia and barramundi, then funneled to fields of wheat, olive and jojoba. "We wrote the book on this stuff," says Ziv.

Experts, though, wonder how far technology can boost supply. Drip irrigation and desalination can only do so much. Making the desert bloom was a good idea "in its time," says Brooks, but now "the very idea of developing the Negev is wrong." The day to rethink Israel's romance with desert farming may be here.

Kevin Peraino has been the Jerusalem bureau chief at Newsweek since January 2005.

Our POSTER is ANITA SANDS HERNANDEZ, Los Angeles Writer, ombudsman, Futurist and Astrologer to Yogi Bhajan for 35 years. Catch up with her websites TRUTHS GOV WILL HIDE & NEVER TELL YOU, also The  FUTURE, WHAT'S COMIN' AT YA! FRUGAL LIFE STYLE TIPS,  HOW TO SURVIVE the COMING GREAT DEPRESSION, and Secrets of Nature, HOLISTIC, AFFORDABLE HEALING. Also ARTISANRY FOR EXPORT, EARN EUROS....* Anita is at astrology@earthlink.net ). Get a 15$ natal horoscope "my money/future life" reading now + copy horoscope as a Gif file graphic! No smarter, more accurate career reading out there! PS. Anita sez, 'get a website for 5$ a month and post articles that YOU LIKE, TOO! Be someone who forwards the action, the evolution. IT IS getting better you know and by getting WORSE FIRST, it gets better!

<===BACK TO THE HOME FOODSCAPING GARDENER

<==== BACK TO THE SHOW BUSINESS  ARCHIVE for Producers, Writers and Video Documentarians