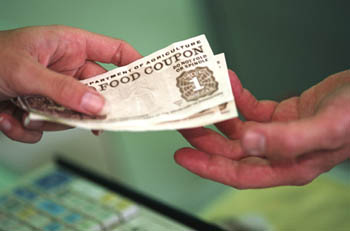 There was a famous New Yorker cartoon where two hippies talk enthusiastically. 'I just got my AFDC check and combined with my Social Security check and my Workman's Comp and my Unemployment check and my Dad's pension check and my girlfriend's Section 8 Free Housing stipend, I think I can kick back for a few days so let's go picket the Federal Building." To me that cartoon is as seminal as the New Yorker cartoon from the forties where the kid spits  a big PHTOOEY of food at his parents who tell him Children in CHINA are starving and would love it and he says "I say it's Spinach and I say to HELL WITH IT!"

Someone should draw a new cartoon where a jobless millenium man who has submitted his resume to hundreds of potential businesses and failed to find a job sits on a bridge beam gloomily saying, "I could take Workman's comp but then I'd lose my initiative. I think I'll kill myself instead."

I'm cogitating that way because my New York PC programmer pal who's been jobless for 2 years and sent thousands of resumes out with no result but who'd providently applied for Workman's Comp and been turned down, today heard that he'd won his appeal! Workman's Comp is giving him a huge check for $20,000. He wondered if I thought that he should take it. (!)

"Everyone says I should, and God knows, I really need the money, but I'm afraid that if I do and just sit home waiting for a check  every month, I'll vegetate. Also, the judge in his decision said, in effect,  that he was doing this because he felt the evidence showed that I could  never work again, at least in my former capacity, and I'm worried that if I take the money, I'll also begin to think the same way.  I would really like  to know what you think; I can't ask the other people I know, because I all owe them money, and of course they will say I should take it."

I wrote him back saying it was payment for two years of resumes he'd sent out, probably the sum he'd spent doing it. Also, told him that I knew a little about the dole -- try  twenty years of AFDC welfare while raising my four fatherless kids. (Their father hid in Mexico where the law couldn't reach him.)

Today (and during the very dole years that were supposed to suck the pluck out of my bones,)  I work twenty hrs a day writing scripts, novels, article, doing horoscopes, reading palms, entertaining by doing readings at posh parties, running a website, self publishing 7,000 "HOW TO LIVE RICH WHEN YOU'RE POOR" instructive articles. What is more, all my kids have cottage industries and drive good cars and one son bought a house. Four kids raised on welfare, is there anyone deeper into the dole than that? The trick is that they do what they saw their ole momma doing, working twenty hrs a day at her desk in front of them.

True, one child went lame. One child develped schizophrenia in his mid twenties. He's recovered now, touch wood but he had worked from age sixteen onwards, golf course maintenance, landscaping, then he had his own messengering biz, he was a contract signing MESSENGER. He'd get clients who had multiple deliveries a day  /week including the most prestigious architect on the planet, Frank Gehry. Not eating, stress and too much coffee all day and beer all night can exacerbate genetic tendencies toward the SCHIZY GENE.

My oldest dole boy has his fab wedding photo/video industry in Hawaii a place with a wedding industry biz. he always wanted the tropics. He bought his first property there a few years back, is remodeling it. My second son Mr. Muscles has a guerilla contractor biz, does remodels, kitchens, bathrooms, plumbing, electrical, the whole nine yards, he's a genius. Half the price of contractors. His Basque father contributed that ENGINEERING GENE, the seed of ATLANTIS which Basques are, only living remnant. These people were furious engineers til a tsunami got them. My daughter started out a high paid bookkeeper did it for years, big Bev Hills CPA firm, movie stars lent her their NYC apts. How do you keep 'em down on the farm after they say PAREE? She got bored, quit a huge salary went to NYC & became a freelance no-studio photographer with her own, freelance biz in NYC. She's extremely talented, has worked for the most famous photogs in America, famous names, lived the good life shooting Wall Street families til the Recession hit --then became a 'chore whore' i.e those who are Girl Fridays to the same Wall Streeters. Take kids to school, buy groceries, answer phones, pay bills and cook. (She takes foodie color pics ) She went to Tuscany, Italy last summer, was in Hawaii when 911 hit babysitting her brother's dog. He got stuck in Canada on vacation. She was in  France the year before. These bums grew up on welfare! Pretty damn TONY.

NO WELFARE BARBARAS HERE! WE ALL TOOK huge poisonous doses of welfare and it didn't lay us flat on our backs. So as I wrote my NYC jobless programmer pal: "A welfare hex? GEEZ be superstitious why doncha! The thing is to keep sending out your resume like you've been doing, *(try one year of it, hundreds of submissions, and utter failure because this nation is in a recession that the gov won't admit to!)

Second, get into a second moonlighting profession that fits the needs of the new millenium. Something with headroom where you can end up CEO employing a hundred men. This is a challenging possibility yet you sit frozen, guilty, fearing to take thousands of dollars of start up money. You worry about the judge's opinion somehow magically becoming a reality! You give the two second mental twinge OPINION OF A JUDGE more importance than your own resolve, your desire to create a business of some kind, your desire to find a job your desire to be out with people, participating in society JUST his opinion, just his brain corpuscles clenching for a few minutes on your resume and saying, this guy is finished, that output of those brain cells is so commanding to your destiny?

I know a jobless, office-less surgeon. He started 'Surgeons Are Us' where small hospitals could get a surgeon sent them in ten minutes. He's a billionaire. I read the autobio of a PC tekkie  gal who worked in a big corporation where she observed software services to banks for huge fees. She started the same biz in her garage and made 22 million first year, went public and sold out for 420 million dollars a couple of years later. Her book is "CEO"  by Sandra Kurtzig. Read it. Go to ABE BOOKS dot com and find a cheap, used copy, share it. Inspiring.

Philosopher Writer L.Ron Hubbard was on the dole for body disabilities when he wrote his book "DIANETICS" and started Scientology. Letting yourself love what you love, care about your concerns, research your interests, catch fire and be inspired about life on our planet is really your first step. Participation and profits will follow.

THE DOLE isn't going to prevent that happening unless you spend those profits on whiskey! And you're not going to do that! Have a little faith in yourself. God did. Or who did you think was sending you that dole?

THIS NEWS JUST IN, a NET CHUM who is the master of early 90's program-code pal was afraid of the SSI dole, had stroke, applied & GOT a big check from Workman's Comp for his on-the-job injury. Doctors said he probably could never work again. Six months later, he nailed a fabulous job at the highest salary of his life. He wrote Social Security a half dozen times telling them to cancel his S.S. dole. They can't won't or ......? don't care. He makes 7k a month and has DISABILITY of over a grand! And has copies of his certified letters to SS ADMIN saying do you want your money back? I guess they don't know where to file his truthful letters as there's no box for that as it never happens that a recipient writes to them, want your money back?  UPDATE 2019; This continual JOB waiting for him has gone on for years.  He gets offered new jobs once a month. Has his pick. He's 70 yrs old but knows that old COBOL code. Don't know why I mention it, just that SSADMIN CAN screw up and not find you. When pigs fly.

GUYS: BE A KEYBOARD COMRADE, a PC ACTIVIST, A SOLDIER FOR PROGRESSIVE ISSUES, JOIN THE BERNIES of this WORLD.
SEE HOW: CLICK HERE.  a TSUNAMI OF BERNIES  ---  TAKE OVER but NOT AT POINT OF A GUN LIKE LENIN.

Our POSTER is ANITA SANDS HERNANDEZ, Los Angeles Researcher, Writer, Mother of 4  and career Astrologer. Catch up with her websites  TRUTHS GOV WILL HIDE & NEVER TELL YOU, also The  FUTURE, WHAT'S COMIN' AT YA! & HOW TO SURVIVE the COMING GREAT DEPRESSION, and Secrets of Nature, HOLISTIC, AFFORDABLE HEALING. Also HOW TO LIVE on A NICKLE, The FRUGAL PAGE.* Anita is at astrology@earthlink.net ). Get a  35$  natal horoscope "my money/future life and romance picture " reading + copy horoscope as a Gif file graphic!