If You Know Secret, Delphiniums are Not Hard to Grow

Delphiniums are true garden aristocrats--strong vertical shapes that tower above everything else, in colors that are most regal, including that most precious of garden colors, true blue. No wonder some of the favorite strains have names like King Arthur, Guinevere and Galahad. They would probably be in every garden if it were not that they have a reputation for being difficult to grow, but they are not, if you know but a few delphinium secrets.

Did you know that they are not light sensitive? That means you can plant them at any time, though right now is one of the most favored seasons, (MIDDLE MARCH) because planted now, they will bloom in late April or May, in harmony with so many other flowers that also flower in late spring. You can, however, plant delphiniums in the middle of summer or the dead of winter. The best flowers come on plants that do their early growing when it is cool, but flowers will bloom in any weather, they will just be on shorter spikes.

Did you know that there are full-sized delphiniums and compacts? Though there are many kinds, two types are commonly available--the Pacific Giants (more properly the Pacific strain) and the Blue Fountains strain. Pacific Giants can live up to their name by growing to five or six feet or even eight on occasion. Spikes are fat and full.

The Blue Fountains (sometimes labeled Dwarf Fountains) strain grows much shorter, from three to four feet tall, sometimes even less. These too should have fat, full spikes, but don't always.

The reason plants are not always as they should be is that they are grown from seed that is open-pollinated in fields and they do not always come true to type. Many years ago, the Pacific Giants were as uniform as corn in a field, but then they were hand-pollinated and carefully selected for their seed. Ken Dorwin, now with Hi Mark Nursery in Carpinteria, used to work with Frank Reinelt, the originator of the Pacific strain and he knows how much they have deteriorated over the years. He notes that flowers are not always double so the spikes look less full; that the height is no longer uniform; and that often they aren't even the color they are supposed to be. But even then, there are few flowers that make such a spectacle in the garden. 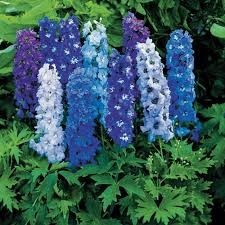 SPECTACLE? US? Why AREN'T YOU KIND!

This is important to know because you shouldn't waste time trying to keep the plants alive for more than a year, and you must expect some variability among the plants you purchase. You certainly do not want to throw money away on cutting grown-plants purchased from mail order growers back east.

This variability may change for the better in the near future because Dorwin is busy at work redoing the Pacific strain, so in a few years, it may once again be as flawless as it was 40 years ago. He is also working with Delphinium zalil , a yellow species, and  cardinale , a red, in an effort to get a delphinium strain that includes red and yellow (the Swiss have already produced some small red and yellow strains but they are not commercially available).

The Pacific strain is actually a group name for several individual strains and each group is supposed to be the same color. For instance, plants labeled as Galahad are all supposed to by white, Black Knight should all have dark purple flower, Summer Skies should have blue flowers with white "bees" (centers), and Blue Bird should be pure blue. But, since these are strains, they will not be identical, just similar. You may find them simply identified as a mix, which means they could be any color and probably will be.

Did you know that delphiniums like lots of water? More than most flowers in fact, but here we must pass along a trick developed by nursery woman The Late Pamela Ingram who at time of her death was adding those new gels to the soil that goes back into the planting hole. These gels, or soil polymers (the most commonly available is Broadleaf P4), can increase the water holding capacity of a soil by much as 400 percent, thus making much more water available to the plants in contact with it. In other words, you can give the delphiniums more water without watering them more often so other plants in the vicinity are not drowned.

Looking a lot like coarse salt, the polymers swell up to the size of peas as they soak up water and store it for the plant's use. Naturally, you want to put the polymers where they do the most good, near the bottom of the hole, and when you pull the plant out in winter, you will find that the roots have latched on to all of the polymers in their search for water. Try her tip.

<===BACK TO THE GARDEN INDEX PAGE