WHAT TO DO WHEN A GUY DOES NOT LOVE YOU AS MUCH AS YOU LOVE HIM.

After a magical first date, Susan was so sure that she would hear from
Stephen again that she even boasted to friends that she'd met "the
one."Two agonizing weeks later, she was shocked that she never
did."Maybe he got back together with his ex," one friend piped in.
"Maybe hewas too intimidated by you," another said. "Maybe you should
call him,"offered another. "Maybe he's gay," suggested yet another.Or
maybe ... he's just not that into you. Sure, these words sound harsh,but
according to a best-selling new dating book, these six words can save
women like Susan from a lifetime of heartache and stress.

Ever since talk show host Oprah Winfrey featured the book, He's Just
Not That Into You, on an episode of the Oprah show, it's been flying
off of book shelves and racing up the best-seller list. Its contents
arediscussed by single women and their dating friends everywhere.
Writtenby former Sex and the City writer Greg Behrendt and Liz Tuccillo,
thisbook debunks many of the myths that women create about men and
dating.The bottom line is that men are not complicated and there are no
mixedmessages. If he doesn't ask you out, call you soon after a date, or
want to come inside with you after a date, then he's just not that into you. 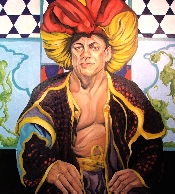 Honey, I started polygamizing at age l7, I'm 50 and Im hooked. on
Polygamy, Not on you! Sorreeee!

This new catch phrase actually started on an episode of Sex and the
Citywhen Miranda (played by actress Cynthia Nixon) tells her friends
that her latest crush ended their last date with two kisses at her door
but declined an invitation inside. His reason: He said had an early
morning appointment. Reasonable, said her friends, but then the only male
at thetable said ... "He's just not that into you."

The Truth Shall Set You Free?

"Coming up with reasons that he might not have called that are
not critical of you is a natural defense mechanism," says New York
Citypsychoanalyst Gail Saltz, MD, author of Becoming Real: Defeating
the Stories We Tell Ourselves That Hold Us Back. Such defenses serve a
positive and a negative function, she says. "Theycan keep us from being
overwhelmed by negative emotions, but if you arealways in denial and
your head is in the sand, that's not useful eitherbecause it keeps you
holding onto a relationship where there is none,"she tells us.

"Hearing the words 'he's not that into you' are painful because it'slike
'what's wrong with me?'" she says. But, Saltz notes, it's not always
that simple. "Sometimes there is something going on that is notabout
you," she says. "The possibilities are endless and this book ispopular
because usually we don't like to talk about the possibility that you are
not the one."The growth and popularity of Internet dating services may
have fueledthe need for such advice."The Internet and the emailing that
goes on before the first date creates the illusion that you know the
person and when they don't call you back, it seems more mystifying, but
you really don't know each otherat all," Saltz says.

Next: 'He's Just Not That Into You' Excuses
People in Glass Houses Shouldn't Throw Stones

Friends create, analyze, and reinforce the excuses and reasons that
women come up with because it could just as easily be them with this
dating dilemma. "Everyone identifies with the victim, so to speak, and
hopes that when they are in these same shoes, their friends can also
think of reasons that he has not called," she says. But "if you have a
friend who can't see the writing on the wall and as aresult they are not
out looking for next Mr. Right then [being honest]would be doing the
person a favor," she says.

"It's all a matter of degree and there are also ways to wake someone up
but spare their feelings," she says. "Try saying 'you are terrific,
hedoesn't t know what he is missing,' because there are ways to
besupportive, but still make it clear that they are hanging on to a
pipedream."

'He's Just Not That Into You' Excuses

Making excuses can be counterproductive outside of the dating world
aswell, she says."Hopefully your spouse should be able to say to you, 'I
feel like weneed to be having sex more often' without you saying, 'Of
course, hewants more sex. He always wants sex. He is a sex maniac!'" she
says."You need to be able to hear the other person, consider what they
are saying, and look at what you are doing to grow, change, and
compromise,"she says. Or "if your boss is trying to tell you that you
are not doing a good joband you walk around saying 'he has a problem' or
'she just doesn't likemen,' it's not productive," she says. "You need to
be able to hearcriticism, obviously if it is constructive criticism,
that's better."

"I can understand why women feel empowered by this book," says
TerrenceReal, founder of the Relational Recovery Institute in Cambridge,
Mass.,and author of several books on male emotional health including,
How CanI get Through to You: Closing the Intimacy Gap Between Men and
Women."The book is implicitly teaching women to have good
psychologicalboundaries, meaning that if he's just not that into you,
it's not yourproblem, it's his and you need to deal with the fact that
for whateverthe reason this guy is not interested in a relationship with
you," hesays."If you are on your hands and knees with a magnifying glass
looking fora needle in a haystack as to why he stopped pursuing you,
you're nuts. It just didn't click, which is fine," Real says. "Maybe he
doesn't likeredheads or maybe you have a broad face like his mother or
maybe youdon't have a broad face like his mother."It may be an intimacy
issue on his part, Real says."The kind of guy that has trouble with
intimacy is love-avoidant," hesays. "A man who has been wounded in his
childhood by family and cultureand can't distinguish between being close
to someone and being eaten upalive is love-avoidant, " Real says."If
there is a history of enmeshment with one of the parents, often
themother, in which the man was used as a hero child, performer,
confidant,or the baby, then the relationship with a parent was one in
which thechild was there to service the parent's needs, not the other
wayaround," he says. "That's what they feel will happen to them and are
basically intimacy-phobic."But, he cautions, don't throw out the baby
with the bath water. "If youspent the whole date talking about yourself
or not talking about yourself or were excessive and extreme in another
way and bet it was areal-turn off, look at it and do better next time." (found online)

<===BACK TO THE LUCK IN LOVE INDEX PAGE