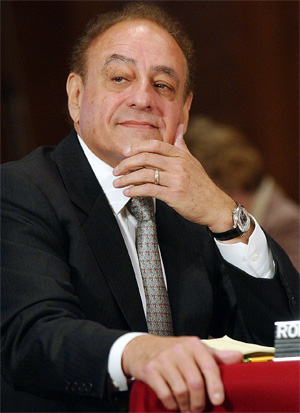 I'm listening to DAVE EMORY on the radio just now and this REPUTABLE INTERNET JOURNALIST WHO DOES ARCHIVING of HOT MATERIAL & RADIO... says that you can blame the ENTIRE MELTDOWN on  ONE MAN, a CUNNING MORTGAGE BANKER & WALL STREET PARASITE "ROLAND ARNALL" who has made his BILLIONS in full view of the U . S .GOV and who got the meltdown going with 5 1/2 million failed mortgages.

In 2006, Ameriquest's parent company, ACC Capital Holdings, settled out of court a series of class action lawsuitsalleging systematic fraud, falsification of documents, and improper sales tacticsfor $325 million, but didn't admit to any wrongdoing. As a result, Ameriquest closed more than 200 branches and fired almost 4,000 employees. Arnall died of cancer in March 2008.

THERE WERE SOME WHISTLEBLOWERS for the gov to break them in two and with sums this high, the QUI TAM WHISTLEBLOWERS themselves made millions. But BOGUS BANKER ARNALL GOT NAILED. Just two weeks after Multi State Suit , brokered a DEAL to PAY $325 Million to HIS VICTIMS, more or less 600$ each for folks who lost their homes. They got enough money for a weekend at an Indian Casino. FIVE AND ONE HALF MILLION ROOKED PEOPLE GOT A WEEKEND for their trouble. SOME PENALTY . Rollover ROLAND got SENT TO HOLLAND as AMBASSADOR, some exile! MOOLA MANAGER MONEY CZAR ROBERT RUBIN got MILLIONS in payoffs from ARNALL. Progressive journalist Scheer takes him apart in this ^ article  He was the Head of CITI BANK and trainer to Tim Geithner. Remember Scheer quote, "the balloon boy hoax was nothing. Wall street hoax is what stinks". It's here.

So back to the KING of lies, Roland Arnall who only lived past infancy as his entire family lied to beat the band. Rollover Roland was born on March 29, 1939 in Paris, France. His parents were Eastern European Jews who had fled to Paris. He was 14 months old when the GERMANS TOOK OVER! During World War II, Arnall was raised as a Roman Catholic in a French village where they hid. The whole family went to MASS so that they wouldn't be detected, an ENTIRE clan OF JEWS! Little Rollover Roland was kept unaware of being a Jew until after the war had ended, when he was six years old. So "BY LYING one LIVES" became his mantra at a very tender age.( "ME FIRST, YOU WAY LATER" second mantra  as  he had Aries Sun and Merc conjunct Saturn in Aries, sign that's basically all about me.)

After the war, Arnall and his family moved to Montreal, Canada. Then In the late 1950s they relocated to the United States, and for a while Arnall sold flowers on the streets of Los Angeles, California.

He must have learned mortgage banking as next thing you know he'd become the billionaire owner of ACC Capital Holdings, the parent company of Ameriquest, which was once one of the United States's largest and most aggressive sub-prime lenders. Dave Emory's radio show suggests he was connected to Martin Boorman's Jewish bankers. (Boorman took all the Nazi money to south America.)

In early 2006, Roland's company got busted for banking infractions and had to do a $325 million settlement with state attorneys general and law enforcement agencies and financial regulators in 49 states and the District of Columbia over allegations of predatory lending practices. Predatory and illegal practices Ameriquest was accused of included misrepresenting and failing to disclose loan terms, charging excessive loan origination fees and inflating appraisals to qualify borrowers for loans.
He'd apparantly had boiler rooms grinding out sub primes by the thousand.

Family
In 1977, Arnall helped found the Simon Wiesenthal Center, a human rights organization, and the Museum of Tolerance. He served for 16 years on the California State University board of trustees.

Arnall and his wife, Dawn, were longtime, generous political contributors, giving to both parties, according to Federal Election Commission records. Arnall had two children with his first wife Sally, Daniel and Michelle.

The ex-wife of Ameriquest Mortgage Co. founder and ambassador nominee Roland Arnall is asking a judge to approve an investigation into her former husband's finances to secure a higher divorce settlement - seven years after the marriage ended.

In court papers, Mrs Arnall claims the billionaire businessman concealed his true wealth when their 37-year marriage ended and also pressured her into accepting an inadequate settlement.

Roland Arnall's attorney tried  to limit the scope of the investigation & Arnall declined to discuss the case with the Los Angeles Times, saying it was a "personal and private family matter."

The 1998 divorce garnered little attention until June, when Sally Arnall filed papers to reopen proceedings, claiming she still has most of the $11 million and two homes in Los Angeles and Palm Springs she received in the settlement. The couple separated in 1996.

"However," she said in her recent declaration, "I believe I was misled and that I received substantially less than my share of the financial empire we amassed during our marriage."

Roland Arnall, whose nomination by President George W. Bush to be ambassador to the Netherlands was at the time of his exodus to Holland,  facing other problems.

Orange-based Ameriquest has been investigated by 30 states over its lending practices, prompting the company last month to set aside $325 million for potential settlements.

Arnall failed to make a series of required legal disclosures, including expansion plans of his business empire, said his ex-wife's attorney, Vicki Greene.

Since 2002, Arnall had given campaign contributions to California politicians including Arnold Schwarzenegger.

In the 2003-2005 period, Arnall and his wife raised more than $12 million for George W. Bush's political efforts, including $5 million for the Progress for America Voter Fund, a self-proclaimed "conservative issue advocacy organization dedicated to keeping the issue record straight." In 2004 he was one of the top 10 donors to the Republican Party.

Mrs. Arnall also served as a co-chair for the 2004 Republican Convention and hosted a $1 million Bush-Cheney fund-raiser at the couple's 10-acre (40,000 m2) home in Holmby Hills. In 2005, Ameriquest Capital and three of its subsidiaries comprised four of the 53 entities that each contributed the maximum of $250,000 to the second inauguration of President George W. Bush.[7][8] Writes USA Today, "Inaugural fundraisers Dawn and Roland Arnall found a creative way to pump more than the $250,000 limit into the event. Their mortgage firm, Ameriquest Capital, contributed the maximum, as did three subsidiaries, for a total of $1 million. The company declined to comment on its political giving.

On May 9th, SHMAIS.com (Lubavitch News Website) reported that Chabad of California was to be the beneficiary of an $18,000,000.00 donation from the estate of Roland Arnall.  (THEY ARE STILL SUING THE ESTATE TO GET IT.) Before his passing, he made arrangements for Rabbi Shlomo Cunin to receive the donation, and a short while later sent in a down payment of $180,000.00

On August 1, 2005, Bush nominated Arnall to become the U.S. ambassador to the Netherlands. The Senate approved his nomination on February 9, 2006.

Arnall was successfully installed as ambassador to the Netherlands on March 8, 2006 when the Dutch Queen Beatrix received Arnall's diplomatic letters.

Arnall announced his resignation as ambassador on February 21, 2008, effective on March 7, citing the ill health of his son. (?) A few weeks later, on March 17, 2008, Arnall died of cancer according to FOX Business at the UCLA Medical Center in Los Angeles, twelve days shy of his 69th birthday.

FOUND THIS  ARNALL RANT AT A YAHOO GROUP:

To my knowledge the one and ONLY ACCOMPLISHMENT then SENATOR BARAK OBAMA ACHEIVED  Nominated and CONFIRMED an ORGANIZED CRIME BOSS BILLIONARE BUDDY ARNALL  to US AMBASSADOR where he "admits HE and Wife ENJOY RIDEING THEIR BIKES THROUGH THE TULIP FIELDS" JUSTICE ? WHAT JUSTICE ? OBAMA/ARNELL PALS ? And has any one heard of the "RICO ACT " BOBBY KENNEDY gave his life to see that slime MOB BOSSES such as AMERIQUEST MORTGAGE, Orange N.J. and ARGENT corp which ARNALL and friends owned/ ran. We are IMPALED ON WALL ST. It had to happen for THEN AND ONLY THEN can "WE the PEOPLE" SEE CHANGE Until his recent death, ROLAND ARNALL was RUNNING "CITI  BANK" WHERE HE AND HIS BAND OF THIEVES  RECEIVE TRUCKLOADS OF FRESHLY PRINTED GREENBACKS thanks to Geithner & the SWEAT off YOUR BACK "CRIMINAL JUSTICE COMPUTER FORENSICS"

PS: WAKE UP WE THE PEOPLE, BEFORE YA GOT NO CHANGE
PS:CRIMINAL JUSTICE IS DETERMINED ON GREENBACKS/ NO CASH NO JUSTICE....C'MON PEOPLE UR GETTIN SHORT CHANGED!!!!

A more coherent researcher, DAVE EMORY, says that the money Arnell was using was BOORMAN NAZI MONEY, which BOORMAN GOT OUT OF GERMANY when he left at War's end and went into hiding. NOw that is interesting. BIG MONEY, all the GOLD the GERMANS got, They ended up with all the JEWS' cash and holdings but also SPAIN'S GOLD, an immense collection of smeltable metal, dating back to PERU and PIZARRO and CORTEZ which Germany offered to HIDE back when the 1936 REVOLUTION was going on.  PRECIS OF  SPAIN's CIVIL WAR -- The book on BOORMAN which EMORY quotes is actually full-text-posted at
http://www.animalfarm.org/mb/mb.shtml

EMORY alleges the money he lent as Orange county house loans came from Nazis, well their sons, who are still bankers.. Read  "MARTIN BOORMAN, NAZI IN EXILE" he's the guy who ostensibly arranged for a lot of Nazi loot to be kept safely offshore. The text of the entire book actually is at this above, ANIMAL FARM website. Book would cost 40$ bought used, if you buy at abebooks, though they have a copy at $60 and more ...higher prices . What happened to the MISSING NAZI GOLD?

Speaking of books on missing gelt, Read"WHORES" by LARRY KLAYMAN, (they had an Actor portray Klayman  on West Wing he's a known washington denizen, says it is the most corrupt city on the planet. The book that takes ARNALL to task is  "CHAIN OF BLAME" a recent title folks in the money industry are raving about. Padilla & Muolo wrote it. CLICK HERE > TO SEE CONTENTS.

<=== BACK TO THE MELTDOWN WEBPAGE