CHAKRA means 'wheel' in Sanskrit. CHAKRAS are spinning vortexes of actual energy that Hindu mystics swear actually exist along the spine in the center of our bodies. They are cone shaped whirling things like the pinwheels you set off on Fourth of July.

The cone begins toward the core of the body, spiralling outward. That is actually in alignment with the laws of physics and electricity, so it may be that these Oriental psychics have tuned into something that actually exists. We've heard that five thousand years ago their mystic writers described all matter as having an atom with a nucleus that had protons running around in circles, on the outside, around it. Now, how did they do that? No telescopes or microscopes then, but they wrote about it in their ancient texts which are in museums today. So perhaps we can believe them on this chakra thing. (And, as they also gave us a way to activate our chakras, thusly changing our vibrational rates (!), it certainly couldn't hurt to assume they were right and start experimenting and  testing with making our chakras work better! 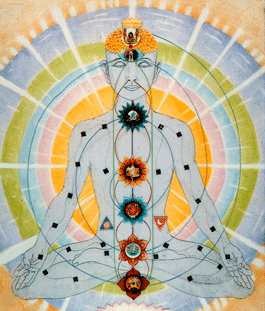 It is said by Hindu mystics that before an illness attacks the physical body, it goes through the chakras. If they are healthy, each doing its job of processing life, the human can ward off the illness and that disease will not attack the physical body. If the particular CHAKRA that deals with the issue has become weakened, by misuse or in any manner, we will feel the result physically and be vulnerable. So it's kind of like a spiritual moral immune system rather than a totally physical one. Luckily, here too, the yogic exercises that the Hindus gave us are said to strengthen chakras so that our moral and spiritual 'defense' system is strengthened.

OK. Now fasten your seat belts and get ready for our trip up the spine. There are seven major CHAKRAS. Each one is a different color, but there are said to be fragments or sparkles of the colors of the other chakras mixed in. Each chakra is a receptor for the frequency energies of all the other colors and activities going on in the other chakras. Chakras communicate with each other. And each chakra has a positive action and a negative one. It doesn't do both at once. But like many things in life, with the CHAKRAS we are dealing with polarities.

. . . is the lower abdomen to navel area, the sex area. Color is ORANGE. Putting ideas into action. Sense of pleasure in self which connects with the issue of self acceptance and polarity between pleasure and pain. This chakra deals with PLEASURE on all levels. Identity issues. How you feel about who and what you are in your life. About who and what is in your life. It also deals with sexual issues. Who and what you are. Deep self identity issues. It is feminine.And like all girls, when it feels pretty, it feels sexy. When it doesn't feel pretty and accepted, it wants to make certain nobody else has any pleasure. It becomes the party pooper chakra. Negative emotions. And even the pain maker, becoming the sadistic personality. LOVES making others suffer!

. . . is above the navel, below the chest. Color is YELLOW. Deals with polarity of being out of control, versus being in control. (as in pot belly versus flat belly? ) Also has a lot to do with Cause and affect. Has to do with what we call control. What you know you can use so that you can have the impact you want to have in your life. The more you know the more control you have in your life. It's about power. How do I control? or how do I become controlled by others? What impacts on me? How do I get the impact I want? Why did I not get the impact I wanted? This chakra is INTELLECT and (Masculine) It's the belly chakra and when there is no control and we have a paunch or pot belly, we have control freaks who end up losing all control. Look at paintings in the museum. Napoleon was one such. Many tycoons are big belly control freaks who really pretend to have power when they have none over themselves, and eventually some flat belly tycoon comes along and takes them over.

. . . is in the center of the chest. Color is GREEN. (some sources say Pink but I have seen certain lillies that blend pink and green so I can see why it could be both.) Deals with meaning and issues of love and emotion and as force. As we create relationships with those people and things that we attach meaning to. The polarity is between attachment and non-attachment. Has to do with issues of love and what we call emotion. In terms of the chakras / aura/ emotions have to do with what things mean to us. (It is definitely Feminine)

THROAT CHAKRA: (5th) . . . is in the throat area. Color is BLUE. Deals with how we communicate; speech, sound, vibrations. Things said, things unsaid. Deals with writing, creative expression. Sometimes when you cannot express yourself, you develop a cough or a tickle in this area. (Masculine)

THIRD EYE: (6th) center of the forehead, between the eyebrows. Color is indigo and deep purple blues. It expresses the way in which we bring all the qualities and dynamics of the other colors together in the mind's eye, resulting in an ability to image self and create personal reality. Deals with intuition. How you image or how you visualize how all the different qualities of all the other chakras come together in your minds eye. Ability to visualize. How we see ourself. How others see us. (Feminine)

CROWN CHAKRA: (7th)  is at the top of the head. (Where babies soft spot was or is.) Color is VIOLET. Deals with what is reality to you and what is illusion. Has to also do with what you believe. If it's whorling correctly, you receive via dreams, meditations. If it's not, you don't get the cosmic message and do not dare dream. This chakra deals with our spirituality. It's where we receive higher messages, know all, never knowing how we know it. It is dependent on the higher powers Ergo it's totally FEMININE. That indicates total receptivity and that is what psychic receiving of dreams, meditation, God's voice, the angels & guardians voices...is about.

Next chapter, the study of YOGA, so that we can rev up our chakras!