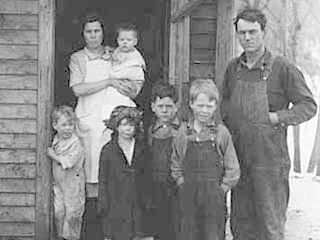 THE GREAT DEPRESSION WILL BE MEGA-BAD cuz there's more of us, and less solidarity, more racial antagonism and few of us have a vegetable garden, orchard full of nut trees, a fishing pond or bunny hutch. Worse,  the 2009  Depression is totally unavoidable at this point. Bank on it. Well, not BANK on it, but BET ON IT! Even if BUSH walks away from the presidency and gives his family's fortune to America to make up for what they did in IRAQ in TWO WARS, we're PASTE.  We are not only headed for a Depression, but a violent DECADE OF MOB RULE that will be far worse than 1929.

NOTE this was written in 2009, so now TRUMP a right wing exclusionist is running for office. The trend has already started. LIFEBOAT THEORY. I'm alright Jack, screw YOU.

A friend of mine wrote me today: "Some experts believe the United States will fall into the chaos, bedlam and the anarchy that tore Yugoslovia apart. I am not going that far, but I know our morals and ethics are not the same as they were in 1929. Moreover, we are a far more violent society and totally dependent upon a well-oiled system for delivery of food and basic services --a system that will fall apart when loonies are hijacking the food trucks as they come to the city limits.".

"Bank Failures - Fridays will become known as F3 - FDIC Failure Fridays. And Voilá . . . two bank failures on Friday, July 25. Then another bank failure a week later, after the market closed, on August 1. Next week? Maybe none, but maybe 10 . . . or more. And here's why."

The man who wrote this is on the ground, in the trenches, and behind enemy lines. He told me "To repeat for those new to my information, I own a real estate brokerage in Florida and I serve as a consultant to banks, financial institutions, mutual funds and hedge fund managers . . . as well as builders and developers. So when I talk, I talk from Behind Enemy Lines. Unfortunately for clients and readers, I can't always share as much detail as I would like because of confidentiality concerns. My institutional clients appreciate that, because they can feel comfortable discussing their portfolios, problems and potential outs.

I can tell you this. We will see at least 100 bank failures before the end of the year. What's important about that statement, is it is not another rear-view mirror statement from one of the financial experts on TV or some of the others that write blogs and columns . . . but never venture out into the world of reality. I will share what I am seeing on the ground and hearing from my institutional clients here and abroad.

US Banks - I work with banks on two levels. One, we offer services to banks selling foreclosed properties to consumers. Two, we offer services to banks trying to determine what they own, what it's worth and what to do with it. The latter includes evaluating portfolios for bulk sales and trying to coordinate these transactions. Let me start with the first level of services.

And what will the government do when this happens and millions are homeless? PUT PEOPLE into CONCENTRATION CAMPS. Who will they put there? Well, obviously, the homeless. They will go peacefully to camps they may even enjoy. Next, the chronic criminals, and they will be taken in manacles and to camps they will not enjoy. Last, guess who will be jailed either with one group or the other? The unemployed. And that's you.
UNLESS you develop a cottage industry built around  a product or service folks REALLY NEED.