THE ROYALTY OF HEROES,  VANESSA REDGRAVE
She was the first "SAVE THE Palestinians FROM the guns of ISRAEL " HERO, advocate.
http://www.imdb.com/name/nm0000603/bio describes her activist life, private life, why she dropped hubby Richardson...

Dignified, passionate, beautiful, royal with the voice of honeyed silver, a cello voice, Vanessa Redgrave is widely regarded as one of Great Britain's finest modern dramatic actresses. She is perhaps the most internationally famous of the Redgrave dynasty of actors that includes her father Sir Michael Redgrave, mother Rachel Kempson and siblings Corin and Lynn Redgrave. Born January 30, 1937 in London, Redgrave studied drama at London's Central School of Music and Dance. She made her theatrical debut in 1957 and her film debut the following year in the dreadful Behind the Mask, which starred her father. Redgrave would not venture into films again for another eight years, and during the early '60s established herself as a key member of the distinguished Stratford-Upon-Avon Theater Company. During her time with the repertory, she gave life to Shakespeare's works with some of her country's finest performers and met her future husband, the director Tony Richardson.

Redgrave returned to films in 1966, making an unbilled appearance as Anne Boleyn in Fred Zinneman's all-star adaptation of A Man for All Seasons, and co-starring in Karel Reisz's comedy Morgan. In the same year, she played a small but key role as the girl in the photograph in Michelangelo Antonioni's first English language film, Blow-Up. In 1967, Redgrave appeared in the first of several films directed by her husband, Red and Blue and The Sailor from Gibralter. Also in 1967, she made a radiant Guenevere opposite Richard Harris' King Arthur in Joshua Logan's adaptation of the stage musical Camelot. That same year, Redgrave divorced Richardson on grounds of adultery. She had two children, Joely and Natasha Richardson, by him, and in 1969 had a child by her Camelot co-star Franco Nero who played LANCELOT ... the adulterous affair in the movie's plot, too. 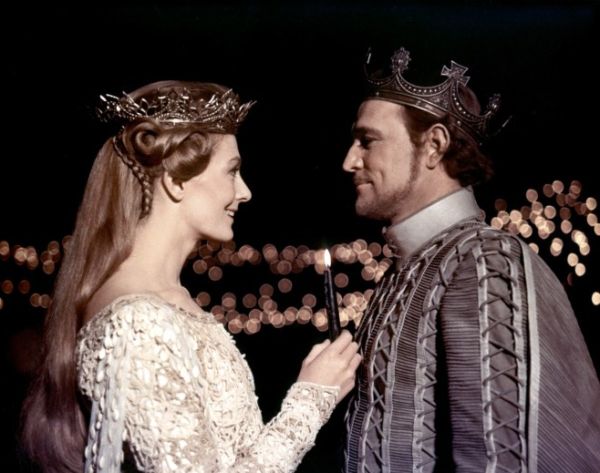 YOU MAY BE KING, ARTHUR, BUT I AM DESTINED TO LEAVE YOU FOR ANOTHER

During these early years of her career, Redgrave hovered on the brink of stardom, due in large part to the uneven quality of the films in which she appeared. In 1968, she played the title role in Isadora, the biography of avant garde dancer Isadora Duncan, earning her first Oscar nomination and her second best actress award at Cannes (her first was for Morgan). The film represented one of Redgrave's first attempts at creating an independent, strong-willed, feminist character with strong socialist leanings. Throughout the 1970s, Redgrave continued to appear in films of varying quality, although her characters were almost always complex and controversial; the highlights from this period include The Trojan Women (1971), her Oscar-nominated turn in Mary Queen of Scotts (1971) and most notably the tragic Julia (1977), which won Redgrave an Oscar for best supporting actress. At the Oscar ceremony, the actress generated considerable controversy during her acceptance speech by using the ceremony as a forum for her tireless campaign for Palestinian rights in Israel. That, coupled with her outspoken support for the communist-oriented Workers' Revolutionary Party, made life difficult for Redgrave, who at one time was considered the British equivalent to actress/social activist Jane Fonda. Though she continued appearing in mainstream as well as politically oriented films and documentaries such as Roy Battersby's The Palestinians (1977), her views cost Redgrave roles on stage and screen and damaged her popularity, particularly in the U.S. Redgrave's television debut in Arthur Miller's "Playing for Time (1980) generated further controversy when Redgrave won an Emmy for her portrayal of a Jewish violinist interned in a Nazi death camp who is ordered to help serenade women on their way to the gas chambers. Due to her anti-Zionist stand, many, including Fana Fenelon, the real-life violinist whom Redgrave was portraying, objected to her playing a Jewish woman.

During the '80s, Redgrave came into her own as a leading character actress. She has subsequently appeared in a number of distinguished television movies, including Second Serve (1986) and a remake of Whatever Happened to Baby Jane (1991), which co-starred her sister Lynn Redgrave. Her film work also remains distinguished and she has received Oscar nominations for James Ivory's The Bostonians (1984) and Howards End (1992). Her taste for playing a variety of characters has not changed, as evidenced by portrayals ranging from Oscar Wilde's mother in Wilde (1997) to her role as a doomed earthling in the 1998 summer blockbuster Deep Impact. Redgrave's television work was singled-out for recognition as she took home the 2000 Golden Globe for Best TV Series Supporting Actress in for her role in If These Walls Could Talk 2. And you must rent AGATHA with Dustin Hoffman.  She plays famed crime novel writer, Christie. Timothy Dalton, her BF played her adulterous mate.

She continued working steadily into the next decade appearing in Sean Penn's drama The Pledge, and the historical drama The Gathering Storm. She joined the cast of Nip/Tuck in 2004, and appeared opposite Peter O'Toole in Venus two years later. She played the grown-up version of the main character in the Oscar-nominated WWII drama Atonement. In 2011 she lent her voice to Cars 2, earned rave reviews for her work as the mother of Ralph Fiennes' Coriolanus, and portrayed Queen Elizabeth in Anonymous. Did Driving Miss Daisy on stage and a one woman show.

<=== BACK TO THE WEBPAGE OF HEROES