SEE BEHIND YOU, SEE INTO OTHERS' LIVES. HOW? USE YOUR THIRD EYE! 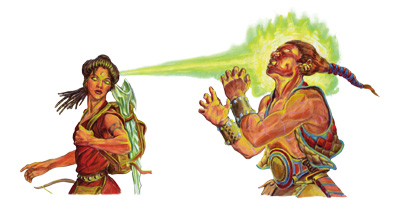 Scientists discover third eye - the center of telepathy and clairvoyance

The fact of the third eye's existence can be found in modern embryology, looking at FETUSES. There is a vestigal eye high up in the center of the skull, (made of rod and cone tissue just like our eyes!) and it is called the PINEAL gland. IT really exists, but its similarity to EYE tissue is unrelated (seemingly) to any current interface with the environment that man now conducts.

It is thought that its 'seeing' function is perhaps left over from millions of years ago when there was some perception by human forebearers, of LIGHT, of the SEASONS, through the skull. Thought that Spring activated early pre-Humans (beasts probably, reptiles maybe,) to come out of hibernation, eat, get strong and then mate. Whatever it really is in Scientific terms, HINDUS think of it as a psychic center. And they were right about the atom, way before there were microscopes. Yogis feel that if attention is directed toward it, and yoga done so there is an electric current in the body, and then one directs that current to the pineal gland, one can start to receive and transmit like a radio station, or receive and beam like a radio. Human to angels, human to human.. Ghosts to humans. Angels to humans or perhaps even a touch of HEAVEN's BREATH falling into our minds,  God to human!

Scientists will admit that the pineal gland with its rods and cones could be the explanation for our visions and dreams, even day dreams. That perhaps this gland is the radio station for DREAMING. And that all our mind pictures at night come from the HORIZONTAL sleeping body allowing the blood to finally leave our feet and hips, our lower-down sections and finally juice up the brain itself.

"Well-known Russian extrasensorial individuals have repeatedly demonstrated an unusual test," the author of the discovery, cyberneticist, candidate of technical sciences in Artificial Intelligence, Vitaly Pravdivtsev said. "The photographic film placed in a light-proof envelope, was put to the forehead, and the film started developing required images. The test revealed that certain people are capable of radiating so-called brain images from the forehead.

Ancient Oriental traditions can prove this supposition: they say that the radiation comes from energetic centers of a human being's  chakras. One of the them is especially powerful at this point, the Ajna-chakra. Esoterics call this center the "third eye," Mr. Pravdivtsev said.

The image of the third eye can be seen on foreheads of ancient divine creatures displayed on the walls and sculptures of Buddhist temples. Some researchers think that it is memory of extraterrestrial human ancestors (gods). Legends say that the all-seeing eye bestowed them with such remarkable capabilities as clairvoyance and telepathy. A lot of contemporary people, mainly Buddhists, devote their lives to retrieve the lost divine possibilities. This work takes many years of intensive spiritual labor, which may end with manifestation of paranormal abilities.

Vitaly Pravdivtsev believes that the third eye is an organ that really exists. One can come across this rudimentary organ on rare occasions in present-day life. The phenomenon of an American teacher, who was covering  her third eye with hair on the back of the head, was exposed to the world several years ago. The teacher said that children used to call her a Cyclops, when she was a little girl. The woman acknowledged, however, that  the third eye was highly useful in so many ways.

The fact of the third eye's existence can be found in modern embryology too. This organ as well as its photoreceptors, lens and nerve cells develops with a two-month-old human fetus. However, the eye disappears as the fetus continues growing. It leaves the epiphysis - a pea-sized pineal gland in front of the cerebellum. Specialists pay attention to the remarkable mobility of the epiphysis and its ability to turn like an eye.

Furthermore, medics point out the direct similarity of the gland and the eyeball: it also has a lens and color receptors. Biologists say that the epiphysis has lessened in size during thousands of years of inaction, although it used to be the size of a large cherry.

The epiphysis might be directly connected with specific abilities of a human being. Some people, who become utterly devoted to spiritual practices, develop a hormonal change in their bodies, which thins the parietal bone. The pineal gland is directly connected with sexual functions. Sexual abstinence activates the epiphysis. This was probably the main reason why magicians and fortune-tellers used virgins and children's help at their sessions.

The third eye was most likely located in the parietal or occipital area of the head many centuries ago. Such a location created the all-round surveillance. The third eye plunged deep into the brain during the evolution. The eye focused its transmitting lens on the front part of the head, where it receives the maximum information. Indians still draw the third eye on the forehead - the center of invisible telepathic signals. 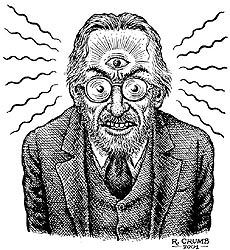 WHY DO YOU THINK THE BEATLES
WORE THOSE LONG BANGS? HUH?
Got those melodies and lyrics from the ANGELS!

<===BACK TO THE NEW AGE INDEX PAGE