PLANET'S BIGGEST OIL FIELD (in Vietnam) is BEING split between world powers!
NOW WE SEE the REASON FOR that WAR!

In the mid-70's, Anthony Sampson wrote in the original edition of his book "THE SEVEN SISTERS" i.e. the seven, major oil companies --that the hush hush,  exceedingly RICH OIL FIELDS of VIETNAM were the sole cause of Americans bombing their way into a small peasant rice farming country called Vietnam, and persistently trying to win an unwinnable war. (That whole paragraph was removed from later editions.)   But no problem, other writers did the same researches:  http://www.conspiracyarchive.com/Commentary/Power_Elite_9.htm     Sampson's original book is found occasionally at abebooks.com You want a first edition though.

The huge sorrow and death-causing WAR that the USA wreaked on VIETNAM killing millions, was all because this tiny Asian country had the biggest oil fields on the planet, just offshore. Bigger than RUSSIAN GEORGIA CANADA or Saudi Arabia even and STANDARD OIL, Exxon today,  (read Rockflrs) wanted those fields.(ALL TO THEMSELVES, but as things ended, Soviets, Chinese English, Americans all share in the treasure, today. )

I've kept an eye peeled on Google pages for three decades wondering when the day would come when that 'Rockfellers KNEW' FACT THAT SAMPSON GAVE US would be proven and also waiting for the day when VIETNAMESE OIL would appear in the marketplace, hoping to be able to tell my moneyed pals to buy Vietnamese oil drilling stocks in the emerging Asian STOCK MARKETS. My thought was that maybe even while the OVERLORDS of WALL STREET still participated in the DRILLING, maybe there was STILL a way for an honest anti-war activist to make some money but to my surprise, just recently when the oil started to be drilled ---it was done by every single oil company on the planet that had earlier ordered that VIETNAM be conquered and exploited, only now RUSSIA was getting a cut of the profits. HALF.Cuz we lost that war. No biggie.They're entitled espec since they lost the Baltics and the Stans.

Make no mistake. That war in Vietnam was a resource war.  Come on, make a note on a notepad, "BUY  USED COPY Anthony Sampson's THE SEVEN SISTERS" in original edition, available at abebooks.com ). Those oil fields are going to provide gushers! (Well, they already HAVE.) Hopefully some profits will go to this tiny country that lost many millions of its people thanks to OUR G.I's and pentagon...and not be guzzled up by the Seven Sisters England, China and Moscow.

The companies that are there now DRILLING are CHEVRON and TEXACO (SEE NAM OIL ARTICLE) but they went in  with the name CALTEX. An assumed identity? THE RUSSIANS have the other half. Very weird. Was some pact made between the two nations in the Gorby period? We give you half the planet's goodies if you stop this commie crap

The Vietnamese war started when JFK was still around but ended officially in 1972. So ok. A decade goes by and the Western powers entered NAM in 81 to drill. NINE YEARS LATER. BUT WITH NO PUBLICITY except in trade journals. NOBODY knew it.

MORE ON the RUSSIAN participation at the RUSSIA JOURNAL.COM you want to google them, search on terms OIL VIETNAM

SO what do you make of it? Are the barges going out full of oil at night, -- the way POLISH ASTRONAUTS go to the SUN? Are the wells offshore? Their booty taken without payment to the Vietnamese? WHO made the deal that the country's oil should be taken away by the WEST? AND is NAM part of OPEC?

INFO on the plunder of Viet Nam and details on how CONOCO struck oil in 99 in Vietnam can be found. GOOGLE SEARCH TERMS: "block 15-1" they call the wells! 5,600 barrels-per-day from one well. Another well is BLOCK 16-2 owned by British Shell  partners, in Rong Dong.

GOOGLE around with this, see what you make of it. PLANETARY OVERLORDS seem to have carved up the country that WON THE DAMN WAR! This is as bizarre as JAPAN/ GERMANY LOSING the war and becoming PLANETARY OVERLORDS afterwards. Does this mean that the cancerous TUMOR CALLED CAPITALISM is the only game in town?

"RESISTANCE IS FUTILE" SOME NAZI once said. IS THAT TRUE? Do events bear that out? Is there any hope of a maverick nation pulling some third world nationalism? Our resources for us? Did Gandhi live for nothing? Are the slick walls of the pyramid lathered with the sweat of conquered nations and the stones glued together with the blood of slaves and on its pinnacle, sitting politely with the Rocks and Rothschilds and the other 14 families do we now find a few Vietnamese Generals, sharing Pina Coladas with their former murderers? I do not know the answer to that one. So I sit back for a year and wait for the other shoe to drop. Today AUGUST 1st, 2008, this appeared:

The Vietnam Standard Oil War!!
The Rockefeller-controlled Pentagon used the excuse of the war to drop bombs in the water and listen to the echo in order to locate the underwater oilfields.

Herbert Hoover, later to become President of the United States, worked for a huge mining corporation that exploited the world of resources. He lived for years in Russia where there were huge amounts of American mining interests until  1917 when the Commies took over and booted Hoover & the miners out, and nationalized or TOOK OVER the AMERICAN digs.  Hoover had done a study however, way back when that showed that one of the world's largest oil fields ran along the coast of the South China Sea right off French Indo-China, now known as Vietnam. This was before offshore drilling had been invented and before a man named George Herbert Walker Bush was to become the CEO of a world-wide offshore drilling company. 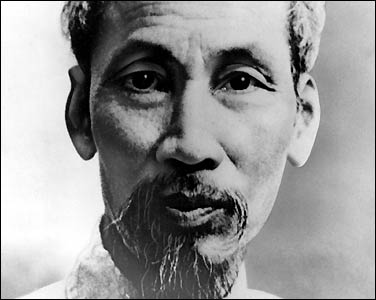 In 1945, Vietnam was still a colony of the French. Laurence Rockefeller, it appears, had given the extensive store of weapons to Ho Chi Minh (who had been our NORIEGA in the region during WORLD WAR II. or like OSAMA BIN LADEN had been OUR paid warrior against the Russians in AFGHANISTAN. We salaried those guys, and they became BLOWBACK for us. ) We used HO with the hope that Vietnam would drive out the French so that Standard Oil would be able to take over the as yet undeveloped offshore fields. But in 1954, Vietnamese General Giap finally defeated and drove out the French at Dien Bien Phu with weaponry provided by the U.S. Ho Chi Minh renegged on the deal since he could read too, (more than read, huge college education in Moscow.) Ho was well aware of the Hoover resource report and knew there was a vast supply of oil off the Vietnamese coast.

In the 1950's a method of undersea oil exploration was perfected which used small explosions deep in the water and then recorded the sound echoes bouncing off the various layers of rock below. The surveyor could then determine the exact location of the arched salt domes which hold the accumulated oil beneath them. But if this method were used off the Vietnam coast on property Standard didn't own or have the rights to, the Vietnamese, the Chinese, the Japanese and probably even the French would quickly run to the United Nations and complain that America was stealing the oil, and that would shut down the operation. So they put on their thinking caps and what did they come up with?

NORTH AGAINST SOUTH. A CIVIL WAR that would give the oil men a chance to do depth sonar!? ? I wonder if Naval Intelligence just didn't phone up HO CHI MINH who had been on their payroll for twenty solid years and say 'Ho,' (that was their affectionate name for him.) 'Ho, old chum, we want to come to town, could you make some noise at the border? Invade or something. Shoot up a few villages?" TWENTY YEARS ON THEIR PAYROLL. C'mon! You know he'd have done it.  Everyone clap their hands and let's have a WAR! But the thing about paid killers is the human conscience is alive in some of them and they start to resent the Head Hoodlum. And when armed and given millions, after Head Hood leaves, the warrior turns on him.


<====BACK TO THE OLIGARCH EMPIRE ARCHIVE ALL ABOUT THE GALACTIC MASTERS

<=== BACK TO ALL THE BENEFITS ACTIVISTS GAVE US LAST 100 YEARS

<== TAKE ME TO THE CONSPIRACY THEORY INDEX PAGE


<=== THE WAR INDEX. WHY THE OLIGARCHS LOVE IT TO DEATH