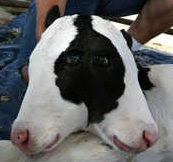 NOBEL PRIZE WINNER SAYS that ordinary
Milk May Endanger Your Health, and the Dairy
Industry Knows It!

A mutant protein has invaded the world's dairy supply, including, most
likely, the milk in your fridge.

The protein, called A1 beta-casein, is well known in the scientific
community. While most dairy companies, trade groups and government
agencies consider it harmless, a growing body of research implicates A1
beta-casein in diabetes, heart disease, autism and schizophrenia.

The original mutation occurred several thousand years ago, causing cow
zero and its offspring to produce milk in which the amino acid histidine
occupies the 67th position of the beta-casein protein found in milk
solids.

The amino acid proline occupies that position in the nonmutant, original
form of the A2 protein. Today, the average vessel of milk contains milk
from many cows, with a mixture of both A1 and A2 beta-casein.

Keith Woodford, a professor of farm management and agribusiness at
Lincoln University in Christchurch, New Zealand, is spreading the word
about what he believes to be the dangers of milk containing A1
beta-casein.

His book, Devil in the Milk, builds on more than 100 peer-reviewed
studies to present a compelling case that A1 milk poses substantial
health risks.

The book is a technical read, and conspiracy theorists will find it
gripping, as Woodford details the extent to which corporations and
government bodies with entrenched interests in maintaining A1 milk's
reputation have disputed, ignored and silenced evidence suggesting there
might be a problem.

If Woodford is right, those fighting to sweep this research under the
rug are endangering the health of millions, if not billions, and for
little in the way of return. He says it would be a simple matter to
remove A1 beta-casein from the word's milk supply.

A New Zealand company, A2 Corp., has patented means of testing cattle
for the A1 mutation. The company assists dairies in switching their
herds to A2 production, which takes about two generations, or 10 years.
A2 Corp. also certifies dairies that produce pure A2 milk and helps
market it.

While Woodford makes it clear neither he nor his family have any
financial interest in A2 Corp., it's clear he hopes the company
succeeds.

Countries with the highest levels of A1 in their milk also have the
greatest incidence of Type 1 diabetes and heart disease, Woodford
explains. This observation inspired a study on rodents, in which one
group of rats was fed A1 beta-casein and the other was fed A2. None of
the A2 group developed diabetes, while half the A1 group did. Other
animal studies implicate A1 in heart disease.

The evidence linking A1 milk to autism and schizophrenia follows similar
lines: Correlations in population studies and support from animal
studies, but scarce research on human subjects.

Direct research on humans, Woodford explains, is fraught with ethical
and practical difficulties:

The subjects of the trial would need to be identified as babies and then
put on either A1 or A2 formula milk once breastfeeding ceased. The
trials would probably need to go on for many years, and the children
prevented from eating any "ordinary" dairy products. The parents of each
child would need to give permission and be actively involved, but could
not be permitted to know whether their beautiful and initially healthy
baby was getting the A1 or A2 formula.

The theories for how these maladies might manifest from A1 milk and not
A2 center on a protein fragment known as BCM-7, which is released when
A1 beta-casein is digested. BCM-7 is found in high concentrations in the
urine of autistics and schizophrenics.

As for the connection to diabetes, Woodford suggests that since BCM-7 is
similar to an amino acid sequence in the insulin-producing cells of the
pancreas, the body might mistakenly attack these cells in an effort to
get rid of BCM-7.

The lack of direct proof of a link between A1 milk and any diseases --
which only human trials could produce -- has been latched onto by the A1
defenders.

There's "not sufficient evidence for the claims being made by the
marketers of A2 milk," I was told, via e-mail, by the National Dairy
Council's Stacey Stevens. "Reviews of the science to date confirm
there's no reason to think A2 milk might have health benefits beyond
those of regular milk."

This statement seems to dodge the fact that the issue I had asked her
about isn't the supposed health benefits of A2 milk, but the possible
health risks of A1 milk.

Stevens responded to my initial query promptly, but I received no
response when I asked her to clarify the Dairy Council's position by
agreeing to the statement, "There is no reason to think that A1 milk
might have health risks."

Stevens' response is typical from the dairy industry. Woodford thinks
it's a result of fear that the public will get scared off all milk.

"We're comfortable that all milk -- A1 milk, A2 milk -- is really good
for you, and you should keep drinking it," said Carole Inkster of the
New Zealand Food Safety Authority in a New Zealand television report on
A2 milk. Fred Brenmuhl, of New Zealand Federated Farmers responded to
the potential dangers of A1 milk by saying, "Stopping the consumption of
milk products is probably more dangerous than anything else."

In May 2007, A2 Corp. began marketing A2 milk in the U.S. produced by
Prairieland Dairy in Nebraska. But in December 2008, the company
temporarily discontinued its U.S. marketing efforts in order to rebrand
and relaunch A2 milk products more broadly.

In the meantime, if you wish to avoid A1 beta-casein, you have a few
options: Milk from goats and sheep doesn't contain A1 beta-casein.

Dairy products made from milk fat, like butter, don't contain A1
beta-casein, even if the milk they were made from did. The jury is still
out on the A1 content of cheese and yogurt.

Beyond the one-time expense and inconvenience of switching their herds,
Woodford says there is little for the dairy industry to fear in the
possibility that A2 milk is safer, and he regrets the industry continues
to view the issue as more of a risk than opportunity.

Although frustrated, he isn't completely surprised, even at resistance
from within the scientific community. He cites many examples of slow
acceptance of new medical ideas, including Robin Warren's 1979 discovery
that stomach ulcers are caused by bacteria.

Warren received the Nobel Prize in 2005, Woodford writes, but in 2000
"the work was still being described as 'controversial.' "

<===BACK TO THE HOLISTIC ARCHIVE