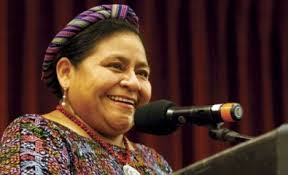 Rigoberta Menchu  was awarded the Nobel Peace Prize in recognition of her work for social justice and ethno-cultural reconciliation based on respect for the rights of indigenous people in Guatemala, where the government killed every soul in six Mayan villages. Menchu was born into a poor Indian peasant family, and raised in the Quiche branch of the Mayan culture in Guatemala. As a teenager, she became involved in social reform programs of the Catholic Church and was active in the women's rights movement. Like her father, she joined the CUC (Committee of the Peasant Union) in 1979, after members of her family had suffered torture, murder and persecution.

During the 1970s and 1980s in Guatemala, military dictatorships became more and more ruthless. Under the guise of anti-Communism US funded troops slaughtered Mayan Indians in the thousands, drove them from their land, and forced survivors to convert to protestant religions and live in often brutal "model villages".

Around this time Menchu became active in large demonstrations, joined the radical 31st of January Popular Front, and encouraged the Indian peasant population to resist oppression.

In 1981, because of her activism, she had to leave Guatemala and flee to Mexico, where she organized peasants' resistance movements and was co-founder of the United Representation of the Guatemalan Opposition (RUOG).

Through her autobiography, which was published as I, Rigoberta Menchu and a film entitled When the Mountains Tremble, which illustratethe struggles and sufferings of the Maya people, Menchu also became well known in the Western world as an advocate of Indian rights and ethno-cultural reconciliation.

There have recently been some allegations that she confabulated parts of her autobiography. For example, in it she describes her brother being horrifically murdered by having a burning tire tied around his neck. When a reporter later established that this hadn't happened: instead it had been a boy from her village who was murdured in this way, Guatemalan conservatives used this as an excuse to claim that all the reports of mass graves, tortures and executions were also false. (See also: denying the holocaust) Her supporters, however, maintain that a few novelistic changes can be forgiven in a book which is not only true on a deeper level, but whose publication brought the crisis in Guatemala into the world spotlight, an event which is generally credited with curbing and eventually ending the reign of terror. Rigoberta Menchu accepted the 1992 Nobel Peace Prize in the name of all indigenous people.

I found this TIMELINE along with her bio at: https://www.thefamouspeople.com/profiles/rigoberta-mench-5732.php

1960 A failed revolt by junior military officers against one of Guatemala's military dictatorships leads to armed insurrection against the government. Extreme right-wing groups of self-appointed vigilantes kidnap and torture anyone suspected of involvement in leftist activities when it was really a military coup. 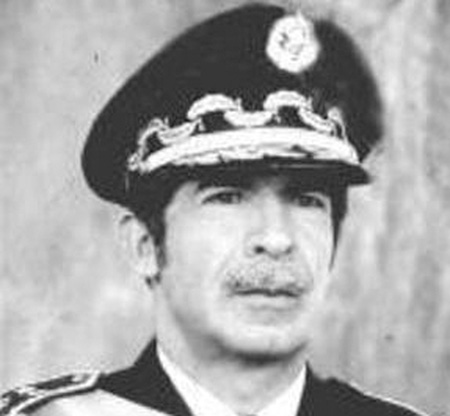 1970s Grassroots groups, including peasant organizations, unions, the churches, intellectuals and others, begin to mount serious challenge for power. In attempts to crush the rebellion, the dictatorships commit great atrocities. Efrain Rios Montt, a demagogic, right- wing general is the country's president during its most violent periods. Forms of repression include disappearances and mass killings.Last year he finally went on trial. The problem is, the CIA had instructed him to do all this and had TRAINERS there. All their officers had been to an AMERICAN SCHOOL for terror and genocide.

The military attacks and genocides Indians  in 665 separate villages, in Quiche, destroying homes, impaling babies and EVEN dogs (so they wouldn't go elsewhere alerting other villages) They did it quietly with army machetes, killing  thousands of people. One million people were uprooted as they fled the area in terror and  became refugees; many fled to southern Mexico to escape systematic military repression. These ignorant INDIANS were accused of being MARXISTS which is WHY REAGAN HELPED. Imagine, a Christian, bigot, racist HITLER, DEAR RONNIE, the man who said 'katsup is a vegetable, count it a meal for school children."

1982 The Guatemalan National Revolutionary Unity (URNG), an umbrella organization made up of four insurgency movements, is formed to lead the struggle against the government.

1985 An election relatively free of fraud is accomplished. Rounds of talks between URNG, the government and the army begin.

1996 The Government of Guatemala and representatives of URNG sign the last of a number of accords which bring to a close the 36-year-long internal conflict, the longest in Latin America. The agreements include the resettlement and economic integration of displaced people into Guatemalan society, the creation of a human rights commission, recognition of the country's cultural diversity, and the right of indigenous people to live by their own cultural norms.

Today Thousands of refugees have returned and the army is supposed to be downsizing. Unresolved is the reality that in Guatemala more than half the population are descendants of Mayan Indians, most of whom live in poverty, two-thirds in extreme poverty. The wealthiest 10% of Guatemalans receive almost one-half of all the nation's income; the top 20% receives two-thirds of all income. Only 4.28% of all land-holders hold 61.8% of the arable land. Most rural households are landless, and many highlands peasants must migrate each year to the large southern coastal plantations to pick export crops. Here they work in subhuman conditions. Also, vigilante acts by right wing military groups still occur.  http://www.csmonitor.com/2005/1006/p06s01-woam.html

These are the same MAYAN Indians who for milleniums dumped their fairest maidens into cenotes or huge sinkhole wells in human sacrifice. There well may be reincarnation and bad karmic accounts at work here.

Our POSTER is ANITA SANDS HERNANDEZ, Los Angeles Writer, mother of 4 and career Astrologer. Catch up with her websites  TRUTHS GOV WILL HIDE & NEVER TELL YOU, also The  FUTURE, WHAT'S COMIN' AT YA! & HOW TO SURVIVE the COMING GREAT DEPRESSION, and Secrets of Nature, HOLISTIC, AFFORDABLE HEALING. Also HOW TO LIVE on A NICKLE, The FRUGAL PAGE.

<===  BACK TO THE COMING EVEN BIGGER MELTDOWN INDEX.

<=== BACK TO THE VULTURE SANDWICH, WORLD STARVATION INDEX PAGE

<=== BACK TO HOW TO STEAL A CORPORATION FROM THE STOCKHOLDERS, the ENRON SYNDROME, done by ALL CEOS today

<== =BACK TO HOW TO SURVIVE SUSTAINABLY

<=== BACK TO THE AMBITION INDEX PAGE

<==  BACK TO THE FRUGAL LIFESTYLE TIPS INDEX

<=== HOW TO START YOUR OWN CHARITY with a FUN PARTY!

<=== THE VULTURE SANDWICH, starving children and other fixes the world needs. HOW TO START A CHARITY, GET YOURSELF AN ANNUAL SALARY FOR IT!