Here is some food for thought - We should place the elderly in prisons.
They will get a shower a day, video surveillance in case of problems,
three meals a day, access to a library, computer, TV, gym, doctor
on-site, free medication if needed.

Then we Put all criminals in nursing homes. They have cold meals, lights
off at 7pm, two showers a week, live in a smaller room and pay
rent at $4,000 a month!!! It's ajoke. But it's no joke  that we treat
prisoners better than the elderly.

Meantime, in between time, we want to see that all our folks maintain our health as
the ancient peoples did. The Hunza, Ecuadorans endured seasonal extreme
cold, heat and worked in the fields or with the livestock YEAR ROUND.
They were active. They didn't know what a remote control was. They kept
their muscles strong. Maybe a cane but no wheelchairs or walkers, and
all remedies were herbal. None of those pharm-monstrosities that have 22
horrific side effects for the one thing they MAYBE CONTROL. And they
lived long.

500 years ago, one Englishman Tom Parr made it to l52 on a diet of whey,
whole wheat bread and cheese. He was brought to court to meet the English King.
He was famous as he'd had a mad love affair at age 100. His host,
Charles II, invited Tom to a few royal meals and Tom dropped dead. Read about his
autopsy where all inside was in perfect order, no trace of what killed
him except that meat pie.

Now I'm not saying that civilized food or even ENGLISH food killed him.
I'm just saying, light may be longer. And a healthy grandparent makes a
terrific gardener and /or childcare giver and can earn his way. If he's
not addicted to bacon, lard pastries and the remote control. 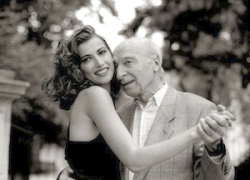 Instead, be addicted to dancing and dating
beautiful women, taking them traveling to Europe!

READ UP ON HOW TO CURE EVERY SYNDROME,
and HOW TO PREVENT or BACK DISEASE OFF IF
YOU KNOW that it's in your GENETIC LINE