CHILD OF FRANCES FAR RIGHT PREPARES TO BE ITS LEADER

LE PEN, ANTI-MUSLIM FATHER & DAUGHTER. Both to the right of Atilla the Hun. She's in line to be PRESIDENT OF FRANCE!

FRANCE DOES NOT NEED MUSLIM IMMIGRANTS. THEY REPLICATE  at FOUR TIMES THE RATE THAT WE DO.

His daughter Marine...running for president of France. 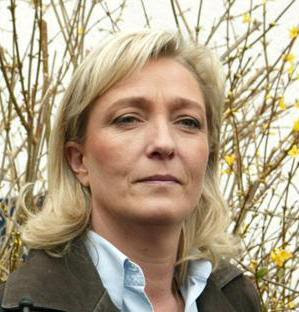 By conservative they refer to racism. White elitism.
Throwing Muslim out of France. Making Frenchmen
available for NATO wherever, whenever.. if
there's a shoot up aimed at dark muslim skins.

CHILD OF FRANCES FAR RIGHT PREPARES TO BE ITS LEADER

Marine le Pen tried her best to flee her father and politics, she says, oppressed by the infamy of her inheritance, which followed her everywhere. But now she is widely expected to succeed Jean-Marie Le Pen as leader of the National Front, the persistent far-right party preaching French purity and exceptionalism, opposing immigration and the European Union, and which she wants to bring into the media age. More and more, she is the face of the party in television debates and national campaigning. Its amazing to see how destiny can mock you sometimes, she said in a long interview at the partys new headquarters, set incongruously in this Communist-run Parisian suburb. I find myself there, in politics, when most of my life I tried to escape from that. She sees herself as having a destiny now, if not one so lofty as that of the partys emblem, Joan of Arc, chosen by Mr. Le Pen as a symbol of French sanctity and resistance to invaders. With her father, 81, set to retire early next year, Ms. Le Pen, 41, intends to carry the banner of the National Front into the 21st century, fighting a new host of enemies  including Islam  that supposedly threaten holy France. It is hard to see Marine Le Pen as a victim, but the National Front thrives on the sense of victimhood of its voters, who see a noble people trampled by supranational forces, impoverished by globalization and overrun by immigrants, many of them Muslim. But her own childhood, she says, was a misery. The youngest of three daughters of a reviled politician who happily pressed buttons of xenophobia, anxiety and anti-Semitism, Marine often found herself ostracized. Her left-leaning teachers despised her; she wanted a lawyers career, but again, she says, the widespread hatred of her father interfered. No one wanted to have as an associate Marine Le Pen  it was simply seen as professional suicide, she wrote in a 2006 autobiography, À Contre Flots (Against the Current). Things were never insignificant. Never easy. We remained the daughters of Le Pen, and people would tend to make us feel guilty, always.

But today she speaks of her decision to take up her fathers mantle as a kind of destiny, or sometimes as a kind of communicable disease. Politics is a virus you never recover from, she said. It can be dormant, but in the end it always comes back, and the only way you can cure it is never to catch it. She grew up with the disease, she said. My father gave me that virus, this passion for the others. I was born and raised with politics, ate politics, slept politics. I tried to escape from it because I wanted to have my own job, but in the end it was the only thing that thrilled me. It also nearly killed her. In 1976, when she was 8, her familys house was blown up. The event scarred her, she said. At that time, there wasnt any psychological first aid. It was a bombing, and when it happened, I suddenly realized the dangers weighing on me, on my father, on my family. Another shock was her parents divorce eight years later, when her mother, Pierrette, moved to America with her fathers biographer and demanded alimony. Let her clean houses, Mr. Le Pen said, and then Pierrette Le Pen posed for Playboy, wearing only an apron and wielding not a banner, but a mop. Marine Le Pen described her mothers photospread as having the effect of a steamroller on me, and her parents feud as a descent into hell. But she is hardly the first person to turn childhood misfortune and isolation into politics, and she speaks with an eloquent forcefulness markedly different from her fathers more folksy style. Tall, blond and telegenic, she is the partys executive vice president for training, communication and propaganda; she has been an elected member of the European Parliament since 2004. Twice divorced, she has three children: a daughter, nearly 12, and 11-year-old twins, a boy and a girl. While she is in a relationship, she keeps her private life to herself.

With her father she is respectful, referring to him as the president or by his full name. For Jean-Yves Camus, a political scientist at the Institut de Relations Internationales et Stratégiques, her father is an impediment to her efforts to change the party. Its a burden, and she probably cant get rid of it until he dies, Mr. Camus said. She does not share her fathers anti-Semitism or deny the Holocaust, Mr. Camus said. But like Gianfranco Fini of Italy, who moved away from neo-Fascism, she will at some point need to make a speech breaking with all those neo-Nazis on the fringe of the National Front, he said. She really wants to play a role in French politics, Mr. Camus said. Its been said that Le Pen is content to be an outsider with media attention, but I really think shes different. She wants to be part of a coalition someday on the French conservative right. She is part of a younger generation that did not know World War II or the colonial wars her father fought in. She incarnates a younger generation; she wants to déringardiser the party, or make it less tacky, said Nonna Mayer, a political scientist at the French National Center for Scientific Research. She does not embody the same extreme right as her father, Ms. Mayer told the newspaper Libération, but attracts a more traditional voter, hurt by globalization and industrial decline.

President Nicolas Sarkozy has tried to absorb the National Fronts voters as the single candidate of the right, taking tough stands against the full facial veil, for instance, and restricting immigration. In this way, said Simon Serfaty, a European scholar at the Center for Strategic and International Studies in Washington, the National Front corrupts the larger parties and forces them rightward. Ms. Mayer thinks the party has lost some of its support recently. But Mr. Camus said, Theyre not going away, noting that many who voted for Mr. Sarkozy in 2007 returned to the National Front in the regional elections. Ms. Le Pen shares her fathers core beliefs. Immigration should stop and citizenship by birthplace should not be automatic, she said, proposing a deterrence policy; we must deter people who want to immigrate. She favors a French first policy for benefits. France erred terribly by trying to integrate immigrants rather than assimilating them, she said. When you go see French people of immigrant descent in the suburbs and ask, Are you French? he says, No, Im a Muslim, and thats a problem. Foreigners must blend in with the national community because we are an old civilization, Ms. Le Pen said. There has been a withdrawal into non-French identities because we sapped French nationality of its content, she said. So how can someone be proud? We spend all our lives saying, We are bastards, colonizers, slavery promoters.  As for the European Union, she predicted, Like the Soviet empire in its time, this E.U. empire will collapse. Asked about her hopes for her children, Ms. Le Pen softened for a moment, but just a moment, then gave a speech. I want them to inherit a country with an untouched cultural heritage, to accomplish what everyone wants: have a family, live safely, build a patrimony, do a job that will allow them to live decently and pass on their own heritage. France has given much to civilization, she said, sounding much like Mr. Sarkozy. There is something special about France, she said. If the French model disappears, it would be a loss for the entire world.

Elswhere on the net she says that she admires the British government's stance on crime during the riots. "When you had riots in Great Britain, the reaction was very firm and strong with regard to the law," she told tv news show. Ms Le Pen also cited the UK's relative stability as an example of how France's economy need not suffer from pulling out of the euro. "Your country is not in the eurozone and you don't have the least desire to be in it. You do not tolerate this kind of taking away of your freedom," she said. There went her chances of the bankers supporting her.

<==BACK TO THE GLOBAL ELITE