5 million Russians are homeless, 1 million are children. AMERICA (with Saudi help) created NO RECEIPTS FOR RUSKI OIL ANYWHERE, i.e. an Economic 'Crashki' via a PRICE War!  WE FROZE A MILLION HOMELESS CHILDREN TO DEATH. THEY STARVED and their pets were out there in the blizzard with them! 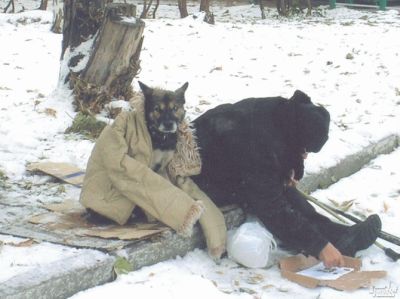 My kid died so I get his coat. I'd rather have my kid back

FROM PAGES OF UK MAG COUNTERPUNCH

“John Kerry, the US Secretary of State, allegedly struck a deal with
King Abdullah in September 2014 under which the Saudis would sell crude at
below the prevailing market price. That would help explain why the price
has been falling at a time when, given the turmoil in Iraq and Syria
caused by Islamic State, it would normally have been rising.” (Stakes
are high as US plays the oil card against Iran and Russia, Larry Eliot,
Guardian) U.S. power brokers have put PUTIN's country at risk of another
financial crisis to intensify their economic war on Moscow and to move
ahead with their plan to “pivot to Asia”.

Here’s what’s happening: Washington has persuaded the Saudis to flood
the market with oil to push down prices, decimate Russia’s economy, and
reduce Moscow’s resistance to further NATO encirclement and the
spreading of US military bases across Central Asia. The US-Saudi scheme
has slashed oil prices by nearly a half since they hit their peak in
June. The sharp decline in prices has burst the bubble in high-yield
debt which has increased the turbulence in the credit markets while
pushing global equities into a tailspin. Even so, the roiled markets and
spreading contagion have not deterred Washington from pursuing its
reckless plan, a plan which uses Riyadh’s stooge-regime to prosecute
Washington’s global resource war.

Here’s a brief summary from an article by F. William Engdahl
titled “The Secret Stupid Saudi-US Deal on Syria”:
“The details are emerging of a new secret and quite stupid Saudi-US deal
on Syria and the so-called IS. It involves oil and gas control of the
entire region and the weakening of Russia and Iran by Saudi Arabian
flooding the world market with cheap oil. Details were concluded in the
September meeting by US Secretary of State John Kerry and the Saudi
King… ..the kingdom of Saudi Arabia, has been flooding the market with
deep discounted oil, triggering a price war within OPEC… The Saudis are
targeting sales to Asia for the discounts and in particular, its major
Asian customer, China where it is reportedly offering its crude for a
mere $50 to $60 a barrel rather than the earlier price of around $100.
(NOTE Make your hotel reservations for that VACATION at height
of WINTER cuz you can drive a thousand miles for no money as gas
prices will halve themselves this WINTER. IN the off season, that
LOBSTER VILLAGE will be empty of tourists, hotel rooms half price!
OR drive south to the tropic WHITE BEACHES with COCO PALMS.
GUARANTEE it. GAS WILL SHOOT DOWN TO NADA A GALLON
SO that AMERICA CAN KILL MORE RUSSIANS BABIES!


That Saudi financial discounting operation in turn is by all appearance
being coordinated with a US Treasury financial warfare operation, via
its Office of Terrorism and Financial Intelligence, in cooperation with
a handful of inside players on Wall Street who control oil derivatives
trading. The result is a market panic that is gaining momentum daily.
China is quite happy to buy the cheap oil, but her close allies, Russia
and Iran, are being hit severely… According to Rashid Abanmy, President
of the Riyadh-based Saudi Arabia Oil Policies and Strategic Expectations
Center, the dramatic price collapse is being deliberately caused by the
Saudis, OPEC’s largest producer. The public reason claimed is to gain
new markets in a global market of weakening oil demand. The real reason,
according to Abanmy, is to put pressure on Iran on her nuclear program,
and on Russia to end her support for Bashar al-Assad in Syria….More than
50% of Russian state revenue comes from its export sales of oil and gas.
The US-Saudi oil price manipulation is aimed at destabilizing several
strong opponents of US globalist policies. Targets include Iran and
Syria, both allies of Russia in opposing a US sole Superpower. The
principal target, however, is Putin’s Russia, the single greatest threat
today to that Superpower hegemony. (The Secret Stupid Saudi-US Deal on
Syria, F. William Engdahl, BFP) The US must achieve its objectives in
Central Asia or forfeit its top-spot as the world’s only superpower.
This is why US policymakers have embarked on such a risky venture.

There’s simply no other way to sustain the status quo which allows the
US to impose its own coercive dollar system on the world, a system in
which the US exchanges paper currency produced-at-will by the Central
Bank for valuable raw materials, manufactured products and hard labour.
Washington is prepared to defend this extortionist petrodollar recycling
system to the end, even if it means nuclear war. How Flooding the Market
Adds to Instability The destructive and destabilizing knock-on effects
of this lunatic plan are visible everywhere. Plummeting oil prices are
making it harder for energy companies to get the funding they need to
roll over their debt or maintain current operations. Companies borrow
based on the size of their reserves, but when prices tumble by nearly 50
percent–as they have in the last six months– the value of those reserves
falls sharply which cuts off access to the market leaving CEO’s with the
dismal prospect of either selling assets at firesale prices or facing default.

If the problem could be contained within the sector, there’d be
no reason for concern. But what worries Wall Street is that a surge in
energy company failures could ripple through the financial system and
wallop the banks. Despite six years of zero rates and monetary easing,
the nation’s biggest banks are still perilously undercapitalized, which
means that a wave of unexpected bankruptcies could be all it takes to
collapse the weaker institutions and tip the system back into crisis.
Here’s an excerpt from a post at Automatic Earth titled “Will Oil Kill
the Zombies?”:

“If prices fall any further, it would seem that most of the entire shale
edifice must of necessity crumble to the ground. And that will cause an
absolute earthquake in the financial world, because someone supplied the
loans the whole thing leans on. An enormous amount of investors have
been chasing high yield, including many institutional investors, and
they’re about to get burned something bad….. if oil keeps going the way
it has lately, the Fed may instead have to think about bailing out the
big Wall Street banks once again.” (Will Oil Kill the Zombies?, Raúl
Ilargi Meijer, Automatic Earth) The problem with falling oil prices is
not just mounting deflation or droopy profits; it’s the fact that every
part of the industry–exploration, development and production — is
propped atop a mountain of red ink (junk bonds). When that debt can no
longer be serviced or increased, then the primary lenders
(counterparties and financial institutions) sustain heavy losses which
domino through the entire system. Take a look at this from Marketwatch:
“There’s ‘no question’ that for energy companies with a riskier debt
profile the high-yield debt market “is essentially shut down at this
stage,” and there are signs that further pain could hit the sector, ”
senior fixed-income strategist at U.S. Bank Wealth Management, Dan
Heckman told Marketwatch. “We are getting to the point that it is
becoming very concerning.” (Marketwatch) When energy companies lose
access to the market and are unable to borrow at low rates, it’s only a
matter of time before they trundle off to extinction. On Friday, the
International Energy Agency (IEA) renewed pressure on prices by lowering
its estimate for global demand for oil in 2015. The announcement
immediately sent stocks into a nosedive. The Dow Jones Industrial
Average (DJIA) lost 315 points by the end of the day, while, according
to Bloomberg, more than “$1 trillion was erased from the value of global
equities in the week”. The world is awash in cheap petroleum which is
wreaking havoc on domestic shale producers that need prices of roughly
$70 per barrel to break-even. With West Texas Intermediate (WTI)
presently headed south of 60 bucks–and no bottom in sight–these smaller
producers are sure to get clobbered. Pension funds, private equity,
banks, and other investors who gambled on these dodgy energy-related
junk bonds are going to get their heads handed to them in the months
ahead. The troubles in the oil patch are mainly attributable to the
Fed’s easy money policies. By dropping rates to zero and flooding the
markets with liquidity, the Fed made it possible for every Tom, Dick and
Harry to borrow in the bond market regardless of the quality of the
debt. No one figured that the bottom would drop out leaving an entire
sector high and dry. Everyone thought the all-powerful Fed could print
its way out of any mess. After last week’s bloodbath, however, they’re
not nearly as confident. Here’s how Bloomberg sums it up: “The danger of
stimulus-induced bubbles is starting to play out in the market for
energy-company debt….

Since early 2010, energy producers have raised $550 billion of new bonds
and loans as the Federal Reserve held borrowing costs near zero,
according to Deutsche Bank AG. With oil prices plunging, investors are
questioning the ability of some issuers to meet their debt obligations…
The Fed’s decision to keep benchmark interest rates at record lows for
six years has encouraged investors to funnel cash into speculative-grade
securities to generate returns, raising concern that risks were being
overlooked. A report from Moody’s Investors Service this week found that
investor protections in corporate debt are at an all-time low, while
average yields on junk bonds were recently lower than what
investment-grade companies were paying before the credit crisis.”

(Fed Bubble Bursts in $550 Billion of Energy Debt: Credit Markets,
Bloomberg) The Fed’s role in this debacle couldn’t be clearer. Investors
piled into these dodgy debt-instruments because they thought Bernanke
had their back and would intervene at the first sign of trouble. Now
that the bubble has burst and the losses are piling up, the Fed is
nowhere to be seen. In the last week, falling oil prices have started to
impact the credit markets where investors are ditching debt on anything
that looks at all shaky. The signs of contagion are already apparent and
likely to get worse. Investors fear that if they don’t hit the “sell”
button now, they won’t be able to find a buyer later. In other words,
liquidity is drying up fast which is accelerating the rate of decline.
Naturally, this has affected US Treasuries which are still seen as “risk
free”. As investors increasingly load up on USTs, long-term yields have
been pounded into the ground like a tent-peg. As of Friday, the benchmark
10-year Treasury checked in at a miniscule 2.08 percent, the kind of
reading one would expect in the middle of a Depression. The Saudi-led
insurgency has reversed the direction of the market, put global stocks
into a nosedive and triggered a panic in the credit markets. And while
the financial system edges closer to a full-blown crisis every day,
policymakers in Washington have remained resolutely silent on the issue,
never uttering as much as a peep of protest for a Saudi policy that can
only be described as a deliberate act of financial terrorism. Why is
that? Why have Obama and Co. kept their mouths shut while oil prices
have plunged, domestic industries have been demolished, and stocks have
gone off a cliff? Could it be that they’re actually in cahoots with the
Saudis and that it’s all a big game designed to annihilate enemies of
the glorious New World Order? It certainly looks that way.