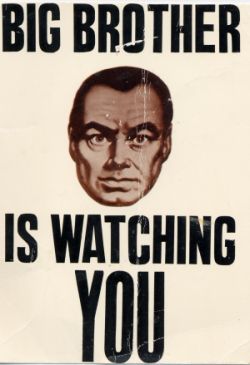 The Obama White House "new media" operations Czar recently contracted a technology vendor to conduct an enormous secret program to gather personal information on millions of Americans from Internet social networking sites such as Facebook, MySpace and Twitter, according to the National Legal and Policy Center (NLPC). The Obama minions are interested in information such as comments, tag lines, emails, audio, and video that mention -- or related to -- President Barack Obama. POSTER's NOTE: He is not the problem, it's the oligarchs he rode in on, so we activists barely have to mention him at all when we create Evolution! "The sites targeted for surveillance include Facebook, Twitter, MySpace, YouTube, Flickr and others -- any space where the White House "maintains a presence."

POSTER'S NOTE: But they can also read all email anywhere even encrypted. Grab hold of book released again this year, "DIGITAL FORTRESS" by author of ANGELS & DEMONS, DA VINCI CODE, DAN BROWN. All about their ability to penetrate all codes, all encryption over at the PUZZLE PALACE. According to the NLPC, this is the third controversy involving the White House internet operations in less than a month. During the heated health care debate, President Obama asked Americans to send information about critics of the White House health care effort to a special White House email address. The ensuing firestorm of caused the White House to terminate the email address (flag@whitehouse.gov) and the web site created for that purpose.

Subsequently, Fox News White House correspondent Major Garrett uncovered the Obama Administration sending email spam from the White House supporting the President's health care position. Again the White House was forced to back down. Now the same people at the White House are at it again with an ambitious plan to harvest huge amounts of information from the web and specifically social networking sites, according to NLPC.

And the news media silence on this latest politically-charged action is deafening, according to conservative journalists. Last week, NewsWithViews.com reported on Obama's intention to appoint a so-called Cyber Czar. During a White House announcement televised on Fox News, CNN and other news networks, Obama said he will appoint a cyber security coordinator -- or Cyber Czar -- for the critical infrastructure that all Americans depend on. "We will ensure that these networks are secure, trustworthy and resilient," he said. "We will deter, prevent, detect and defend against attacks, and recover quickly from any disruptions or damage."

The cyber security office will orchestrate and integrate all 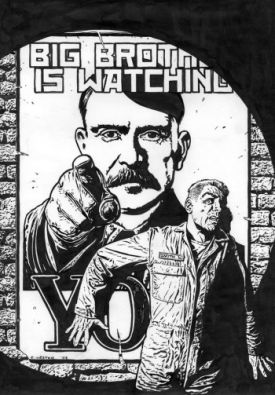 cyber security policies for the government, the president said. It will work closely with the Office of Management and Budget to ensure agency budgets reflect those priorities, and, in the event of major cyber incident or attack, it will coordinate government response. But Critics point out that any high-tech program that entails government intrusion should be carefully monitored by not only the US Congress but also private sector experts in cyber security and computer-based espionage.

"People went ballistic when they discovered the Bush White House authorized the interception of telephone and other electronic communications by intelligence and law enforcement agencies, and rightly so. Yet, I haven't heard a peep from these same people who claim they are concerned with 'privacy rights,'" said security expert and former NYPD cop Mike Fitzgerald. "This may come back to haunt us as the first step down a truly slippery slope," said former the Police detective and director of security. "The technology involved is so complicated that it may take computer scientists to discover whether the government is protecting Americans on the worldwide web or spying on them. And what are businesses that rely on the Internet supposed to do if the President closes down the Internet?" asks Sam McCarthy a former police commander now a computer security expert..

The cyber infrastructure is not limited to the federal government. The office will work with state and local governments and international partners to combat cyber attacks, and also will work with the private sector to ensure an organized and unified response to future cyber incidents, Obama stated.

Experts agree that America's economic prosperity in the 21st century
will depend on cyber security, which also affects public safety and national
security. However, most experts contacted by NewsWithViews.com said that
cyber security should be the responsibility of the private sector not
government officials.

"We count on computer networks to deliver our oil and gas, our power
and our water," said McCarthy.

"Computers help run public transportation networks from the skies to
subways, he noted, and hackers have launched attacks on electrical grids,"
he added.

Part of the Obama program is a national campaign to promote cyber
security awareness and digital literacy. The effort also will be part of the
president's initiative to build a digital work force for the 21st century.
However, according to security experts, Obama is seeking powers never before
given to a President even during the height of the Cold War.

"Once Americans realize what's happening it may be too late thanks to
Obama's supporters in the news media. Do a search and you won't see stories
about this power grab in the major media," warns Baker.

{POSTERS' NOTE: If they can see every emailed letter, dig them out
of servers' archived data, they can search on text for words like
revolt, meeting, guns, bombs, explosives --- they will
see any tendency toward REV..errrr. (R) EVOLUTION
and they can turn off the net. WHAM! BANG. NO PC's at all:
see expert: http://www.well.com/~bbear/internet.html

© 2009 NewsWithViews.com - All Rights Reserved
from: http://www.newswithviews.com:80/BreakingNews/breaking167.htm

<===BACK TO THE CONSPIRACY INDEX PAGE "Jerry's Refrigerator!"