CHEAP CEMENT! FARMERS TALKING TO FARMERS about ‘tricks’ of the rural, home building trade. MICKEY MOUSE THE CEMENT IN MY NEW FARM HOUSE? 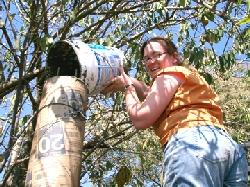 You BET!
Big, greedy corporations have been MANDATING the costly way you do things now, since 1928! GET A GRIP Who (except #*%&(& Portland Cement corp) sez ‘my way or the highway?” Not ANCIENT ROME who built everything in cement using natural sources, rules and concepts. Only person who's going to object besides PORTLAND is city inspectors, but you don’t have those Up in Michigan or at RUSHING River, IDAHO where you're building, do you? There, cutting cement costs in HALF not only sounds good but you could spend the money on a hundred bare root fruit trees and if any damn inspector comes around, give him a few bushels of APPLES! Besides, once it's up, is he going to take a core sample?

ALWAYS go for the Cheap cement recipe that is where there isn’t a weighty LOAD on it . Sounds pretty neat, but we’re curious as to how the newly laid ‘Mickey Mouse cheap mix” block will hold up to the elements if it takes a few days to construct, seal, and roof the building. ELEMENTS?
OUR RESIDENT EXPERT tells us: "Well, if you’re Mickey mousing cement, KEEP THE FINISHED WALL dry. Varnish the sucker and Put a roof on it!
OUR QUERYING FARMER ASKS: If I were doing this, it would be over several weekends, and I’m wondering if I could safely leave the partial walls etc.?? Maybe after your experimental brick has cured you can check its water resistance in that state, I’d try to mix up a batch myself, with a hand mixer but my wife doesn’t let me near her kitchen stuff .

TIV, OUR FARMER & a true JACK OF ALL TRADES knowing how to use every tool that exists, answer. “Go to a Lowes, Builder’s Square or similar building supply house, go back in the section which has pails of bedding mud for drywall joints, mortar mix etc. and look at the various tools. Among them will generally be two brands of mixers for insertion in a half-inch drill for mixing small quantities of mortar and paint. You will use it to mix soaked cardboard boxes or any paper fiber source.

If you soak paper strips overnight it pulps even easier and more quickly. You can go out and find a hundred boxes behind a store, soak them in a hard plastic kiddie pool and build a fibrous freebie cement with 10% Portland in the mix. Cellulose brick will shed water. It will be more absorptive if rained upon. That won’t cause any deterioration in the cellulose/cement brick, but until the excess water is re-evaporated the compressive strength would be reduced somewhat. Sand and cement don’t compress but the cellulose component can (like sawdust or paper cellulose Cement is heavy on the sawdust)---not too important if there is no load on the wall.. After the walls are erected or after a roof-panel is made of the stuff and raised, a water-shedding paint should be applied. Take your choice of cement-paint (read the label) or acrylic latex-based paint.. Note that each has advantages and accompanying disadvantages. You can patch small joints, cracks or damage to a cement-paint wall with a little cheap Portland and water cement paste. You have to use epoxy to repair a wall painted with acrylic latex. Embed roofing fiber-tape for larger repairs (comes in four-inch rolls)

Making and testing samples is always advisable before 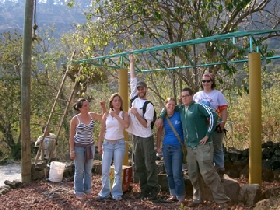 ~^~^~^~^~^~^~^~^~^~ MAKING YOUR OWN CEMENT BLOCKS FOR a quarter EACH! Someone on the list said that they had gotten some concrete blocks for $0.70 per block. If possible, I would certainly like to know the source for that block. I’ve visited two lumberyards and a couple of construction companies and, so far, lowest price I've found is $1.39 per block. We're looking for concrete block to construct a block wall a couple of block high around our garden. At a $1.39 per block, we might have to abandon the idea. At $0.80 or $0.90 per block we could still do it. The highest quoted price, BTW, was $1.89 per block. ANSWER: Our list Leader, the multi careered Tiv said that it would be cheaper to make up one or several strippable forms with tapered blocks fastened to the bottom-board---twist lock hinges, removable pin hinges, or DIY clamps to hold the form together for pouring and setting up. Oil the surfaces with old motor oil. AT last a use for that! That alone makes it worth the price of admission! (My attempt at turning it into fine ladies' soap having failed.) If you buy bags of Portland cement, a pickup load of sharp sand and gravel, mix with a shovel or hoe in a wheelbarrow or on a piece of oiled plywood, a block would cost $0.25 to $0.50, depending upon how strong the block should be for the proposed use. Doesn’t sound like you need much strength, so thin out the mix a lot---make some samples to establish the minimum of Portland---also use a lot of gravel, very little sand so less cement is required.

You can coat and stick-together gravel surfaces with less cement paste than sand takes. My recommendation for absolute lowest-cost is an all-gravel mix since surface porosity should not be of any importance in the garden. The only place you can buy concrete block for 70c today is from a demolition contractor or salvage yard. What's cheap that could be added in? Clay soil? Peat if you live near a bog, hay like the Indians used for adobe bricks? Get creative. Coffee grinds? Nah they're too fine on my roses! 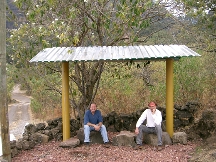 It was the subject of an article in Countryside four or five years back for someone who built himself a quickie, small dome, and Jack Bays (don't know if he is still alive), an eccentric in Cedaredge, Colorado, used to sell a king-size malted-milk mixer you dropped in a fifty-five gallon barrel to mix this and other good stuff of his devising." GOOGLE "jack bays" + cedaredge just like that, many articles on him. "Since it was then more available and of even less value (stores paid you to haul it off), he used pulped cardboard boxes, in which the fibers are a little stronger than those in paper. There have been some recent developments along these lines, and one patent "Tridex" which used junk materials like this to make an extremely strong building panel with good insulation characteristics.


NOW, IF YOU ARE INSPIRED, GOOGLE “IMAGE SECTION”, seeking words “MAYA” + STELE combined and you will see some unique cement columns that have totem faces and bodies in them …not added to cement mix, no… carved into the stone. If you could figure a way to carve fresh cement like that, or pour it into molds, pour faces/ tiles in cement, get those geometric forms....wow.

Our POSTER is ANITA SANDS HERNANDEZ, Los Angeles Writer, Mother of 4 and career Astrologer. Catch up with her websites  TRUTHS GOV WILL HIDE & NEVER TELL YOU, also The  FUTURE, WHAT'S COMIN' AT YA! & HOW TO SURVIVE the COMING GREAT DEPRESSION, and Secrets of Nature, HOLISTIC, AFFORDABLE HEALING. Also HOW TO LIVE on A NICKLE, The FRUGAL PAGE.* Anita is at astrology@earthlink.net ). Get a 35$ natal horoscope "my money/future life" reading now + copy horoscope as a Gif file graphic!

<------BACK TO THE VULTURE SANDWICH, WORLD STARVATION HAS A SURPRISING FIX